Quilotoa cloud forest: did we make it?

After our interesting hike to the cheese factory, today's hiking continued to be fun and scenic, even if not quite what we expected. By consulting the photocopied map that we'd been given, by the kind folks at the Cloud Forest Hostel, we figured that we needed to continue along the road that we'd been walking down, in order to reach the cloud forest. This turned out to be completely wrong. We did, however, eventually make it to the cloud forest. We think. Maybe. OK, perhaps not really.

Patrick and I blame our navigational errors completely on the map. It was just plain wrong. According to the map, we had to continue on from the cheese factory, to the cloud forest, and from there continue further to get back to Chugchilán. Just one big round loop, is what the picture said.

The written instructions below the map told a different story: "return to the town before the cheese factory, continue along the road for a bit, and turn right to get to the cloud forest". But, of course, we didn't actually read that.

So, we followed what the map indicated. We continued along the road, after we'd seen the cheese factory, for about 1½ hours. By this time, we were starting to wonder when the hell we'd be hitting this cloud forest; so we checked the map and the instructions again, and realised that we could stop wondering, and start turning back. Oh well: great scenery along the way, as usual. 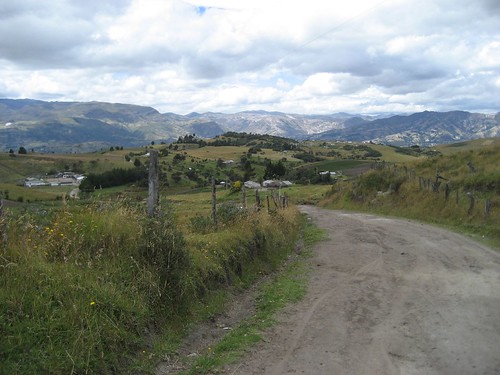 Road that we just kept on following. 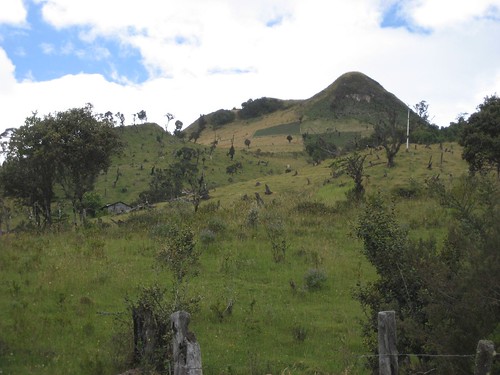 Divine scenery: just a pity that we were going completely the wrong way.

So, heads bowed in defeat, we began the long trudge, all the way back that we'd just come along. Arrived back at the little mountain village (the one just before the cheese factory) at about 1pm — the time by which we originally planned to be back in town for lunch. Oh well, looked like lunch was going to be a bit late today.

We continued on — this time following the written instructions, not the lousy map — along the path that we believed would take us into the cloud forest. We managed to get to the edge of the forest — and in some spots, we did have the lovely drifting clouds wafting all around us — but we couldn't really find the way down. So I'm not sure if we can actually say that we "went to the cloud forest". Maybe we made it. It's possible. But, er, not likely. 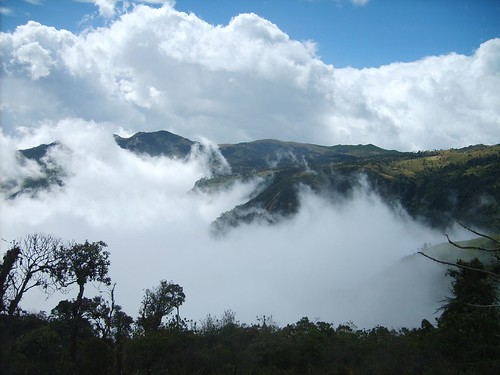 Nice views of the cloud forest. 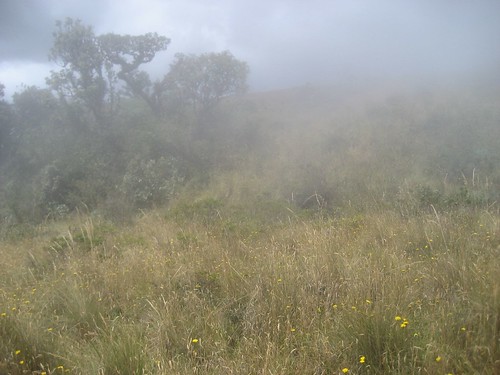 The clouds even drifted up the valley to greet us, for a bit. But we didn’t find a way down, to greet them in the forest.

We did try. We wandered down overgrown little mountain paths. We followed any signs of tracks or manure that we encountered. We even ducked under a few barbed-wire fences, and then ran into a local farmer woman, who asked what we were doing walking through her private property (to which we answered: "err... looking for the cloud forest?"). But to no avail: there just seemed to be no way down, and the day was getting very late indeed. And we still hadn't eaten lunch.

This gave us no choice, but to begin the return journey to Chugchilán. And return we did — using the high mountain path, instead of the winding path into the valley, that we'd gone up this morning. At one point, after we figured that we'd been travelling along the top of the hilly ridges for quite long enough, we asked a local if this was the right way to Chugchilán. Couldn't really understand his answer — perhaps if he had some teeth, I would have had better luck; but he didn't, so I couldn't — but we got the general impression that he was saying "yes".

Shortly after the toothless encounter, we decided to veer off the ridge path, and take a little path that went off to the side, back down towards the valley. This turned out to be an excellent decision, as the path that we took ended up being a shortcut right back down through the hills, and it ended up going all the way back to Chugchilán, virtually in a straight line (with "straight line" being an extremely loose term, here in the Andean highlands).

We finally arrived back in the village at about 4:30pm, after almost 8 hours of straight hiking (and they told us that it was only 4!). Had a quick shower (in the nice, hot showers of the hostel), then had a long-overdue appointment with a big, meaty lunch. Oy, what a day.