For our second day in the Quilotoa Loop area, Patrick and I decided to do the popular hike from Chugchilán, to the "cheese factory" in the countryside nearby, and then on to the cloud forest. We had a great morning's walk, through a fairytale countryside of rolling hills and quaint little farms (although it was uphill most of the way). We were also blessed with great weather (not something to be taken for granted, here in Ecuador). However, the visit to the cheese factory turned out to be — well, somewhat different than expected! In short, it looked more like a house than a factory; and we saw little or no evidence of cheese, or of cheese-making, in the immediate vicinity. 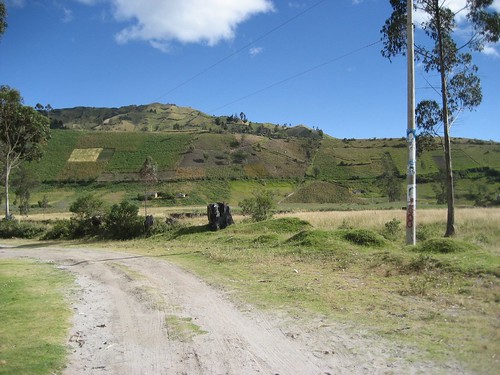 Starting out on the hike to the cheese factory. 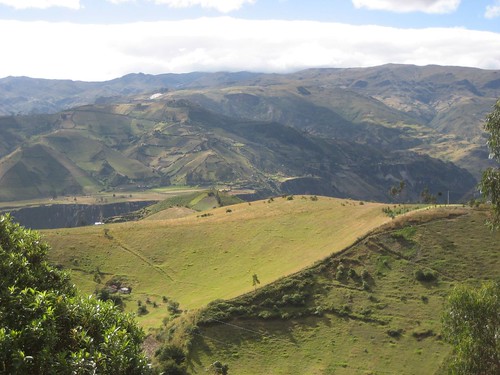 Loovly scenery along the way.

After a great breakfast at the Cloud Forest Hostel — they have home-made cheese, fresh-from-the-oven bread, and the great Latin spread dulce de leche (milk and sugar, boiled until it forms a jam paste) — we set out on our hike at about 8:30am this morning. It was about ½ an hour of walking through relatively flat terrain: first on the road out of Chugchilán, and then through the farms that sit near the foothills. After that, it was over an hour of walking uphill, until we reached a wee lil' mountain village, with no villagers to be seen. Great views of the area the whole way through. 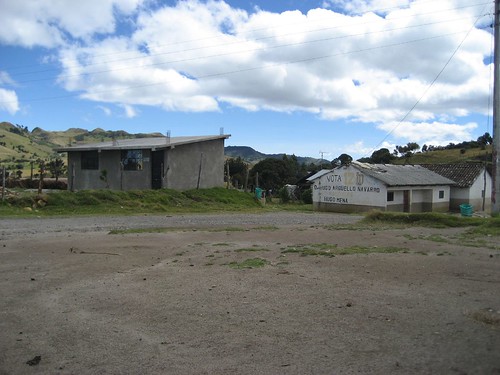 We had a short break, and then continued on to the cheese factory. The cheese factory is a bit further along the dirt road, at a small turnoff on the right where there are some pine trees lining the path. We were expecting that when we got there, we'd see a big metal building, workers scurrying around, perhaps some industrial noises, and some smoke coming out of the chimney. At the very least, surely there'd be a decent collection of cows around? Nope. We saw none of that. This is what we saw. 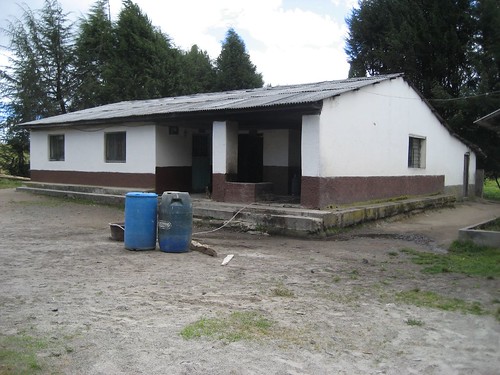 The cheese factory: it’s not much.

When we arrived, we found two labourers re-doing the concrete on the front garden wall. "¿Esta es la fabrica de quesos?" (lit: "is this the cheese factory?"), we asked them.

"Sí", they replied. "Siga no mas" (lit: "continue no more", or "you've made it"). We looked at the very un-cheese-factory-like house in front of us, dubious and with eyebrows raised. But hey, if they say so. So we went in, and had a look.

Not much to see inside, really. In one building, there were two women scrubbing the kitchen tiles. In another, there was a woman tending to a fire oven, which didn't appear to have anything cooking in it. Like I said, no evidence of cheese-making whatsoever.

Ah, well — maybe our expectations were a bit too specific. After all, you have to treat these things generally:

Q: What's so special about the cheese-makers?
A:Well, obviously, this is not meant to be taken literally. It refers to any manufacturers of dairy products.

Anyway, personally I'd rather go watch a stoning. But then again, you have to always look on the bright side of life. :P

Just as we were walking back to the road from the cheese factory, we saw a tour group coming in on horses. They asked us if the cheese factory was any good. "Oh yeah, it's amazing — absolutely incredible", we told them, with an excited yet serious expression on our faces. I think they heard us cracking up with laughter as we walked off.

a bit of Monty Python in Ecuador