With the dive course now finished, it's time to get out of Sairee, and to start exploring a bit more of Ko Tao. To kick off the exploration, today Adam and I rented a quad bike, and took it for a spin. A quad bike costs a fair bit more than a regular scooter motorbike to rent — but it's a much safer option, if you plan to tackle the shockingly poor-quality dirt roads that criss-cross most of the island. Short of running them off the road, quad bikes are extremely difficult to crash or to damage — whereas you can easily (and people regularly do) damage a scooter on a poor road, in which case you'll likely be facing a hefty repair bill. As I was still very much recovering from last night, Adam did most of the driving. 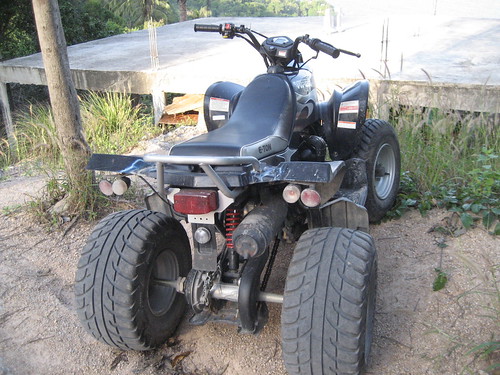 The two of us rented the bike in Sairee; and from there, we took the nice sealed road (the only one on the island) down past Mae Hat, and south to Chalok. I took all my bags with me on this ride — they're not too bulky, so I managed to whack all of them onto my back — in order to complete my move down to Chalok. It didn't take me too long to find Taraporn resort, to fall in love with the room and the price, and to promptly dump my bags and check-in there. I was planning to head further over, to the more isolated bungalows on the other side of the bay's western head — but I decided that I'd stumbled upon about as good a place as there was to find, so I looked no further.

From Chalok, we drove up to Hin Wong Bay, which is located in the north-east part of Ko Tao. Hin Wong Bay is a lovely little spot, but it's bloody isolated: it's quite remote from any other populated spots on the island. The road that leads there is shocking, consisting of dirt, large potholes, and treacherous steep bits the entire way. There are numerous secluded hideaway spots such as this on the island: if I wanted somewhere really serene, I could stay at one of them; but I don't know how long I'd last in a place that's so remote, and where there's so little to do (especially at night). Hin Wong Bay also has the added caveat of offering no beach: it's all rocks, which is great for snorkelling, but less than ideal for swimming or relaxing. 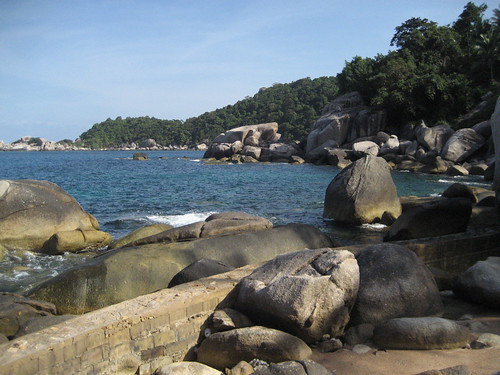 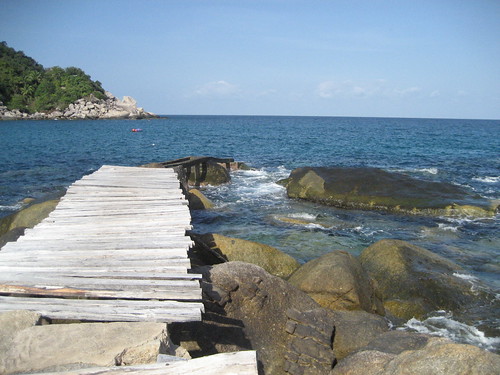 Adam and I ordered a late lunch in Hin Wong Bay, at the only restaurant that the place has to offer (it's attached to one of the handful of guesthouses there). We were joined by a random German dude, who's staying here and enjoying the serenity for a few days. Quite an eccentric boy: he's looking for a place to enrol into training for Muay Thai, that most violent of all forms of boxing (yet the most popular sport in all of Thailand); and he makes the dubious claim that his home city of Berlin is "the best city ever". Adam wasn't too impressed with that claim: I guess he believes that his home city, Dublin, deserves that title. Perhaps I believe the same, deep down, for my home city of Sydney.

After lunch, I decided that I'd sobered up enough to take the wheel on the quad bike. I jumped in the driver's seat for about 10 minutes: but after that, I was too s$#% scared to continue, and so I gave up and returned the reins to Adam. Quad bikes are bloody hard to drive: it's like driving a car, but with the steering and brakes of a bicycle — not my idea of fun. In my opinion, if it's got four wheels and it's too heavy for one man to lift, then it needs a proper circular steering wheel, and a set of real brakes.

Our final stop for the day was the end of the road that stretches north from Sairee. From where the road terminates, we scrambled down through the rocks and trees, until we were right on the water's edge, and opposite the small island that sits just north-west of Ko Tao. From here, we had a fabulous view of the sunset, as it descended into the sea. 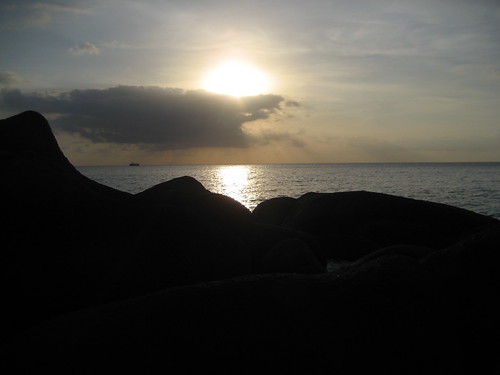