Today, I went on the famous tour of the mines of Potosí: the No. 1 thing to do here in Potosí, and the main reason why tourists come to this town at all. The tour was very dark, very cramped, very asphyxiating, and very disturbing. The mountain of Cerro Rico currently has 15,000 miners working in 400 mines, in positively hellish conditions. The mountain has been constantly mined for over 400 years. Experts predicted about 10 years ago that the mountain had about 7 years left, before the whole thing came crashing down, due to its foundations being literally "undermined". And it's still going.

We started the tour at 8am this morning, with Koala Tours; which meant that we could conveniently get picked up from our hostel (owned by the same people, funnily enough), the Koala Den. Short bus ride, and we got taken to the "miner's market", in downtown Potosí, where our excellent (and English-speaking) guide began our tour.

The miner's market is a pretty crazy place. The shops there sell you a standard package of dynamite, ammonium nitrate, and a fuse, all for just Bs. 17 (about USD$2). No license required. No questions asked. We bought a few of these packages: some to give as gifts to the miners; and some to blow up ourselves. Since the miners all work for themselves, as part of one of the co-operatives, they have to buy everything that they need themselves (including dynamite); and instead of earning a salary, they make money solely by personally selling the materials that they dig out of the ground. 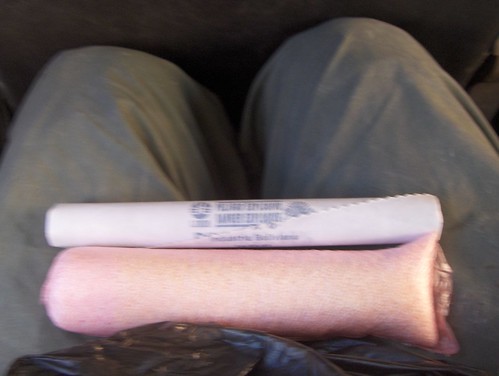 Dynamite and ammonium nitrate, sitting in my lap. Holy $%#&!

After the miner's market, next stop was one of the refining plants, where the materials from the mines are purified somewhat, into the raw elements that are actually of value for industry (mainly zinc, but also tin and copper). I say "somewhat", because the materials are only refined to 30% purity here in Potosí; the rest of the refining is generally done overseas, closer to the places where the materials are to be used in manufacturing (e.g. in China), and where the technology is far superior to the rubbish that they have in Bolivia.

The refining plant that we visited was our "introduction" to the horrors of the mine. We visited one of the few locally-owned plants — most of them are foreign-owned, especially by Canadian companies — which is entirely operated by five young women. We saw some of the devices that are used in the refining process, such as the soaking vats for the mounds of dirt, and the massive mixers and filters that the dirt is put through. Our guide said to us (in true Bolivian style): "it used to be much more dangerous in here, back when they used mercury to help with the refining. These days, it's much safer, they only use cyanide". Ahhh... how reassuring! We all made sure to put our bandana-masks over our faces, as soon as he said that. :P 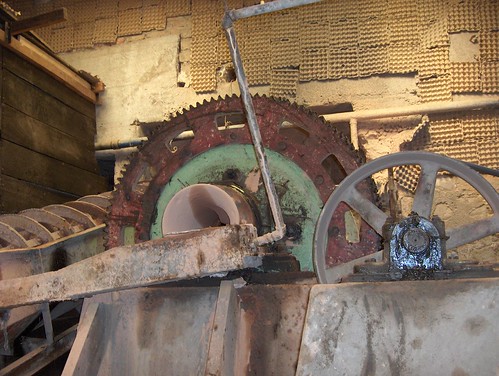 Equipment in the refining plant.

Once done with the refining plant, it was on to the mine itself. There are over 400 mines in the mountain of Cerro Rico, but we only visited one of them: Mina Candelaria, one of the oldest (it's been running continuously for over 300 years), with about 150 people working inside it each day. It was a short bus ride up onto the mountain; and then it was time to say goodbye to the sunshine and to breathable air for two hours, and to descend into the mine's purgatory-like depths.

Mina Candelaria has four levels. The fourth (and lowest) level is where the most actual work goes on these days; but the environment is so bad and so dangerous down there, that our tourguide refused to take us that far. We started on the first level, where the air is already very foul and very hard to breathe, but where it's still something approaching healthy; and where you can seldom stand up fully erect, but where you can generally stand at least at half-height.

For our first 15 minutes or so walking through the mine, in level 1, we were following the train tracks for the mining carts; and every few minutes, we had to quickly get off the tracks, and find a little recess in the passage wall to take shelter in, as a cart came whizzing past, pushed by young and dirty worker boys, and filled to the brim with dug-up dirt. Some of the boys down in these mines are as young as 10 — with the average age of a miner here being 20 — and once they start working, very few have more than 20 additional years to live (i.e. the average life expectancy of a miner here is about 38). A short, dark, smelly, and very unpleasant life for all involved.

On level 1, they've set up a small "museum" for the tour groups to visit and have a look at. The museum is an abandoned little dug-out room inside the mine, and the air inside it is slightly less foul than the air in the rest of the mine. They have some old relics there, such as antique carbon-monoxide detectors (i.e. "mechanical canaries"), and old shovels and pick-axes. They also have a number of documents (some in English, some in Spanish), explaining things such as particularly bad incidents in the mines' history, the economic issues around the mines, and social and health issues that the miners face.

After the museum, our group began the descent down through level 2 of the mine. Level 2 is the worst part of the mine by far: these days, it's basically just an access route between the levels above and below it; and there's almost no breathable air in there (everyone was on the brink of fainting the whole time), almost no space (you get through it by crawling, at best), and difficult and steep rocky bits to conquer all the way through. Our guide explained how he worked for several years, in this mine, as a miner; and how until they put in the new electrical elevator a few years ago, to lift the dirt up from level 3 to level 1, all the miners (himself included) had to carry the dirt up through this ridiculously hellish level, with 40kg+ on their backs for each trip up. 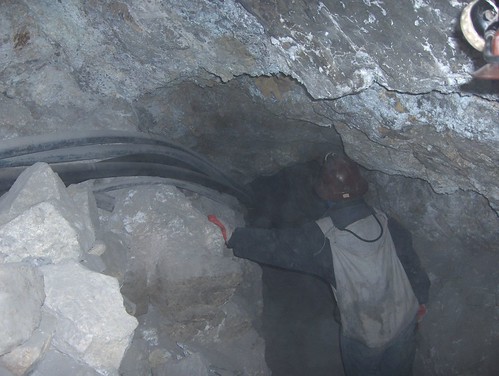 Getting through some of the worst bits in level 2.

For the final descent through level 2, our guide split our group into two, with one half going down the "easy" way with him, and with the other half electing to take the harder way down. I was feeling a bit crazy, and I thought "what the hell, how much worse can it get anyway", so I was one of those that elected to go the harder way. This consisted of going down yet more ridiculously small passages (barely big enough to squeeze through on all fours), and of sliding down an almost-vertical drop of about 4 metres, through a kind of wooden chute. Good fun, if a bit dangerous.

Finally, we made it to level 3 (the "gringo level", as our guide jokingly called it), where we once again had closer-to-breathable air (due to ventilation pipes coming down and servicing this level), and almost-big-enough-to-stand in dug-out passages. Level 3 is (these days) where the material from level 4 is brought up to, sorted somewhat, put into containers, and sent the rest of the way, up to the surface. We saw some miners at work in this level, receiving loads of material that was brought up from level 4 by train-carts, and digging through it before sending it further along its way. We were having a hard enough time just standing there and watching, in that foul atmosphere: how those guys could do hard physical labour down there, all day long, was simply mind-blowing. 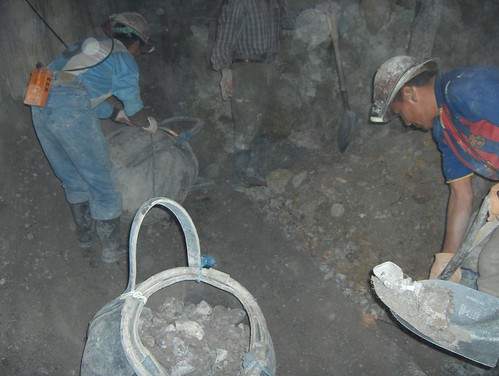 Workers digging through material on level 3.

All the workers looked very tired, very dirty, and very much a product of their worst-place-on-earth environment. And they all had one cheek that was extremely fat, because it was filled with the coca leaves that they chew all day long. Apparently, the coca leaves give the miners the strength that they need in order to work down here for 8 hours straight, without any food or water, and without much decent air. As Dr. McCoy would have said: We're dealing with medievalism here".

We stayed and watched the level 3 miners at work for a little while, standing under a rocky ceiling that the miners explained "contained about 4000 tonnes of rock, which could collapse and bury all of us at any moment". Which was why they were working, right then and there, to fill the roof with more cement, in order to further re-enforce it. Charming. Some people also picked up a shovel, and helped the miners with their work for a minute or two, after which they almost collapsed from exhaustion. Before we left, we gave the miners the gifts that we'd brought for them: sticks of dynamite, as well as large bottles of soft drink (customary gifts for tour groups to give them).

Finally, we said goodbye to the miners, and made our ascent back up through the levels of the mine, toward the surface and to fresh air. The climb back up through level 2 was just as bad on the way up, as it was on the way down; but we made it nonetheles. Once again, on level 1 there were a number of train carts that we had to give way to (unless we wanted to get run over by them). We even had one incident, on the way back, where we had to squeeze past about 3 train carts, that were gridlocked into lying stationary on the track; this involved getting through the space between the carts and the wall of the passage, which was barely as big as we were. Definitely not an ideal tour for claustrophobics. But we all made it. And then, at long last, we could see the light, and breathe the air of the surface once again. We were still alive! 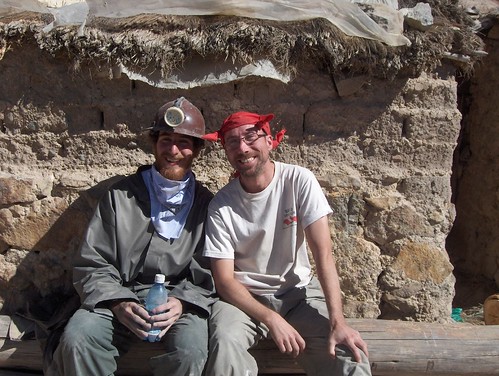 Myself and Chris, at the top of the mine.

The mines of Potosí really are a relic from the dark ages. Personally, I'm glad that the experts have said that the whole mountain's going to collapse any day now: in my opinion, the sooner that happens, and the sooner this whole operation comes to an end (despite the massive short-term economic problems that this will create), the better. I feel so strongly about this, that I decided to write down my thoughts on the economics of this situation. I'm really glad that I did this tour, because despite being about the least pleasant thing that you can do as a "tourist" on "holiday", it's a real eye-opener, and it really makes you remember that no matter how bad you might think your job is, it could never be anything near as bad as what these Bolivian miners have to endure.

See also: video of us blowing up dynamite outside the mines, after we finished the tour.