Last Sunday morning, Jesus and I went to Pisac and checked out the markets, but we didn't make it to the ruins. This morning, we returned to the Valle Sagrado ("Sacred Valley") and to Pisac; and this time, we overcame all hurdles, and made it up to the Inca ruins that overlook the town from high above. Temples, citadels, stepped hillsides... all I want to know is, what took us so long to get there?

You may recall that last week, I was refused entry to the ruins of Pisac, because my boleto turístico ("tourist ticket") had expired; and Jesus was refused entry, because he didn't have his Cusco resident ID on him. This week, Jesus remembered his ID. And as for my boleto: well, I don't want to mention any names, but let's just say that it helps to have someone in your host family who works at the oficina de turísmo ("tourist office"), and who can give you a complementary "extension" to your ticket's expiry date. ;-)

As with last Sunday, Jesus and I caught the local bus from Cusco to Pisac this morning (about 1 hour). I wasn't feeling 100% on the bus — as last night was a big night (Friday night in Cusco... big?... drinking?... could it be?) — but I survived the journey, with the help of a jumbo 2.5L bottle of water. We were feeling pretty lazy (and I was feeling pretty weak) when we reached Pisac: so we skipped the hour-long trek up the mountain to the ruins, and got a shared taxi to the top. Not exactly my style: but Jesus likes to live the high life whenever possible, and I was in no state to argue. 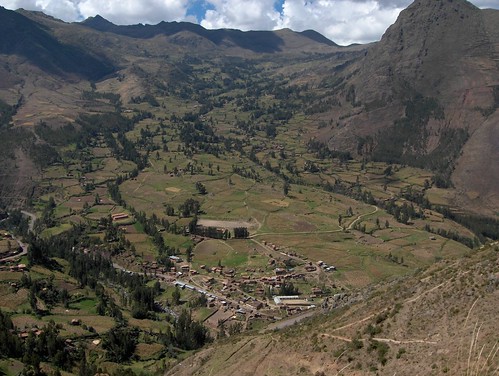 Town of Pisac: long way down.

Jesus gave me a great tour of the ruins (he was once a tourguide around Cusco), pointing out and explaining various historical facts and theories, as we walked through this magnificent and sprawling set of hillside ruins. One of the first things that we saw, and that I found very interesting, was the myriad of "holes" that can be seen in the side of a cliff in one section. Each hole is actually a tomb — instead of burying their dead, the Incas around here inserted each person's body into a little hole in the cliff. Not sure if they did anything with the body first, such as reduce it to a skeleton, or mummify it. 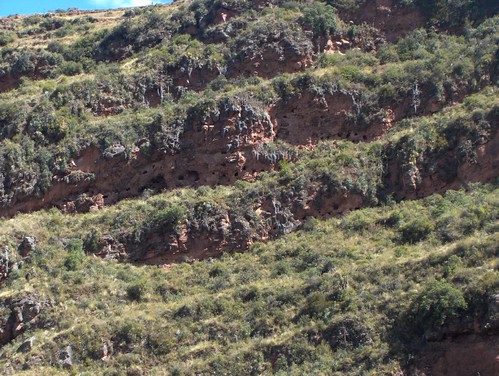 The stepped hillsides here in Pisac are some of the best-surviving and most beautiful in the area. Nothing grows on them except grass these days: but in Incan times, they were built for agricultural purposes, and crops such as potatoes and corn were grown along each "step". I find it amazing that they went to so much effort, just to make the ground a bit flatter for growing vegetables. I mean, they're vegetables — they don't need a perfect 0° elevation in order to grow — but anyway, it looks pretty cool now, and I guess it would have looked even better when filled with tall crops. 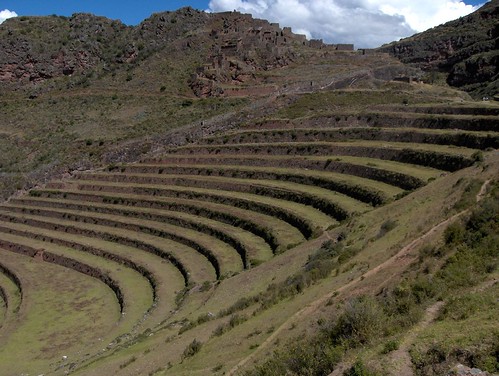 The grassy steps of the Pisac hillsides.

The main attractions at the ruins of Pisac, though, are the temples of the sun — with its famous intihuatana (Quechua for "hitching post of the sun") — and of the moon. These temples are in the shape of the entities that they respectively represent (when seen from further uphill), and the brickwork and the masonry (they're mainly built without cement) is amazing. As with most ancient ruins, it's terrifying to think how many thousands of people would have spent years of their lives hauling rocks heavier than themselvs up the mountainside, and how many died in order to build these monuments. 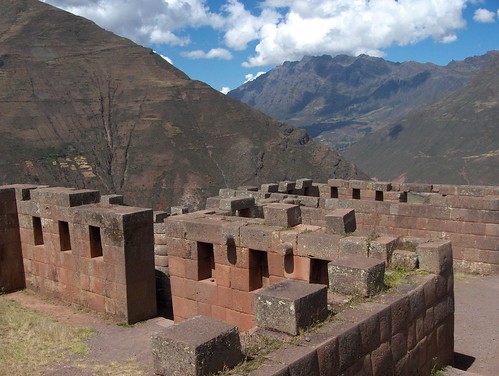 It took about an hour to walk the circuit that goes through all the ruins in the Pisac site. Once we were done, we returned to the flea-market and taxi area at the top, and caught the same taxi back down to the town of Pisac. Then, it was on to Urubamba for one hell of a buffet lunch.