From my little milk stop in Cassibile, this morning I continued straight up the SS115 highway (the main highway of Sicily's east coast), and by 11am I was in beautiful, famous Syracuse. It was a quick and easy ride: as with yesterday, I continued to be blessed with beautiful weather (something that I don't take for granted these days), and with flat and smooth roads. Although it's one of Sicily's major cities, I actually thought that Syracuse would be much bigger: I was surprised at how quickly I managed to whiz through the moderate sprawl of outer suburbs, and to reach the island of Ortyiga, the historic centre of the city. This gave me plenty of time to cruise around on my bike, and to give myself a leisurely tour of Ortygia. 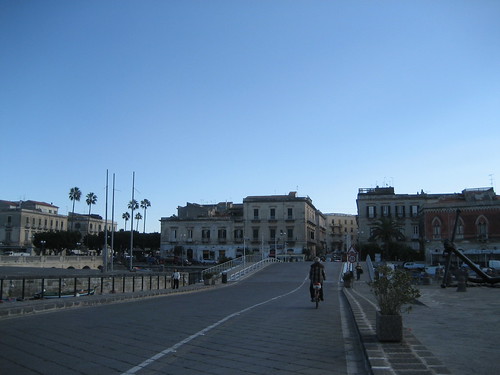 Bridge connecting Ortygia island to the rest of Syracuse: the entrance to the historic centre.

Syracuse is probably the biggest tourist hotspot in Sicily, and this is largely due to its being one of the most beautiful and most historic places on the whole island. In ancient Greek times, Syracuse was the capital of the extensive Greek colony in Sicily (with Agrigento being the second major centre); and indeed, for parts of the Greek period, it was considered by many to be the most powerful city in the ancient world. Today, the island of Ortygia is a UNESCO World Heritage Site; and it should be clear to any visitor why, what with the gorgeous historic churches, temples, houses and streets that make up the island. 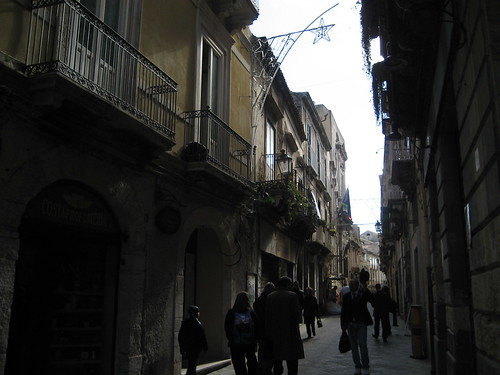 Syracuse's history and its legendary charm have incurred their price: the place is infested with crowds of tourists (even in November, there's no shortage), and with the usual tourist accompaniments of abundant hotels, cafes, B&Bs, restaurants, and souvenir shops. However, even all of this cannot detract from the beauty and the character of the city, particularly right in the middle, on the island of Ortygia itself (indeed, many tourists never venture off the island). The pefect way to start a tour of Ortygia is to get yourself lost in the winding, narrow maze of cobbled streets, of which it has plenty — and this is exactly what I did. 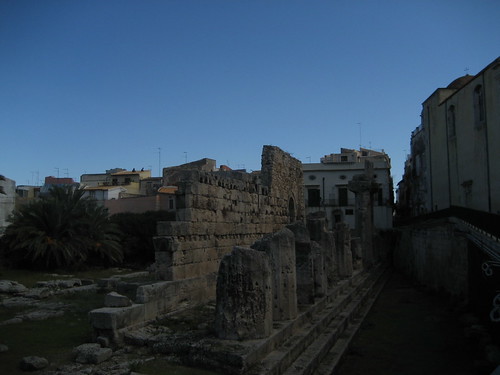 Greek ruins in the centre of Ortygia.

The southern edge of Ortygia is particularly beutiful: it straddles the massive bay upon which grater Syracuse sits; and it commands sweeping views of the bay, of the birds, and of the rest of the city. Also not-to-be-missed is the colourful and chaotic market just north of Ortygia's main square, where merchants are shouting out — and ready to bargain on — their many wares, including an abundance of fresh fish, and a variety of local fruit and vegies. Plus, the Duomo (cathedral) of Ortygia is a most impressive architectural gem indeed. 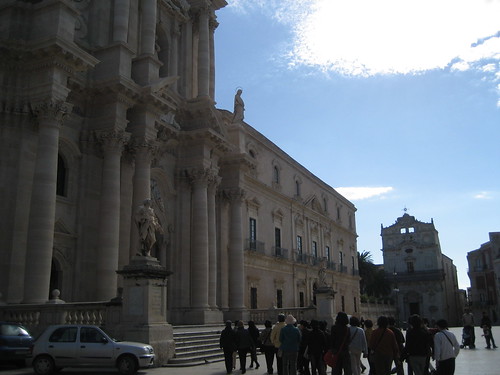 Duomo of Ortygia (plus large Japanese tour group about to enter it). 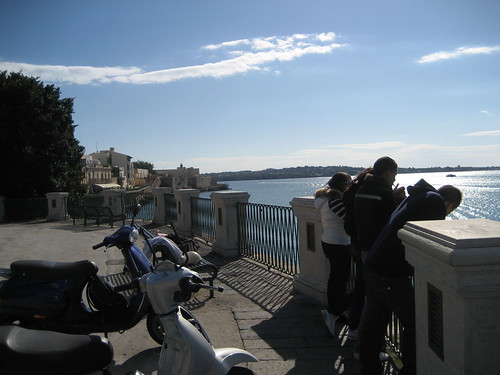 Fellow tourists look out on the bay of Syracuse.

After I'd ridden around for a little while, and soaked in the sights and sounds of compact yet captivating Ortygia, I decided it was time for the morning coffee break. Naturally, there was no shortage of options for places to sit down, since the ratio of cafes-per-square-metre in Ortygia is about 2,000:1. I found a nice, relaxed cafe on the central square, where I was greeted by a friendly group of local old men (I was pleasantly surprised that I was able to find local people), and where I enjoyed a delicious hot choc and croissant.