After a difficult and lonely afternoon of separation — hell, it must have been almost 5 hours — this evening, we the Open Water crew had a grand and long-awaited reunion. It's been a while, but it was good to see everyone again :P. To celebrate, we drank the legendary farang beverage of southern Thailand: the bucket. Buckets come in two sizes: huge, and f$#%ing huge. Their contents generally consist of whisky, Red Bull and Coke; but they also come in numerous other, more exotic varieties (and, should you drink them on Ko Pha-Ngan of a full moon, less legal varieties :P). Tonight was my first bucket-drinking experience: and please G-d, may it be my biggest. Because if it gets any worse than it got tonight, then I'll be dead. 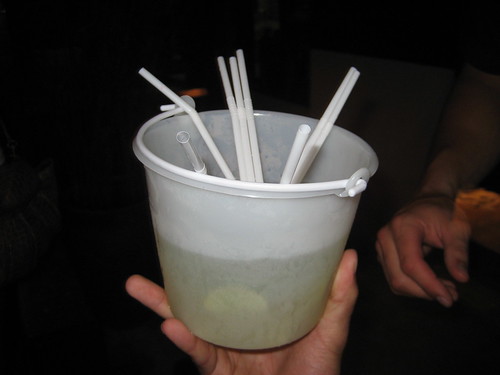 Le bucket, for monsieur. I believe that this particular bucket was of the “tropical delight” variety.

Our reunion kicked off in the bar area at Ban's, where we watched the video that they recorded of us this morning, using a hi-tech underwater camcorder. The video was amazingly professional, and the footage of the underwater scenery superb; but none of us (except the instructors) looked at all flattering in the video (myself least of all), and the price of a take-home DVD copy was 2,000B (app. AUD$70), which I considered to be a major ripoff.

Once the video had finished (they played it on the enormous digital projector in the bar), it was time for the royal VIP treatment: the 15 of us were seated at a super-long table, that occupied half the restaurant; and we enjoyed a delicious dinner, of which the entrées were on the house. It was a grand, group feast: but it was just the start of the night's festivities.

Tonight was our turn at the “congratz on finishing your Open Water” table.

The bucket-drinking commenced at Ban's, where all of us were given a special stamp, that entitled us to 50B off any bucket. Who could resist such a promotion? Adam and I shared 2 of the bastards. We got through them without any problems, and I felt OK after we'd finished slurping on them. However, they were bloody strong — as evidenced by my sudden, irresistable urge to commence break-dancing in the middle of the bar. 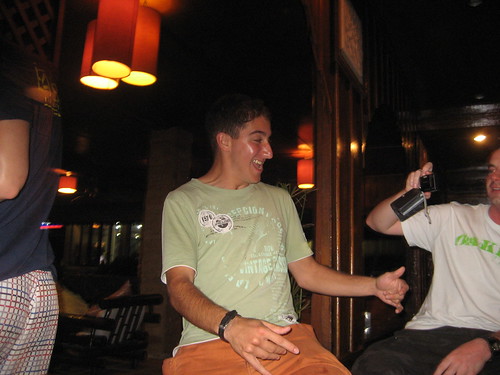 Sorry… I do that sometimes.

As the night progressed, we said goodbye to the bar at Ban's. Rumour had it that Ber's bar, the Hippo bar, was kicking off with a big party tonight. Ber himself assured us of the fact, and strongly persuaded us to follow him over to the joint: and so off we went, to see what all the fuss was about. 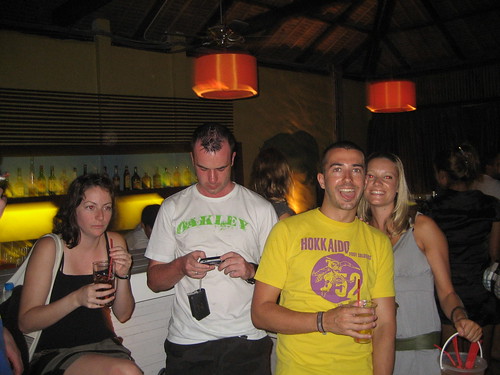 Party continues at the Hippo bar.

From there on, all I can tell you for sure is that I arrived at the Hippo bar, that I had one more drink (not a bucket, just a small Coke mixer), and that I have no memory of the night whatsoever from that point on. For the third time during this trip — and in my life — over-intoxication stole several hours of my life's memory. According to my friends who were there to witness it, what happened included the following:

This was the third time that I've lost my memory and been a silly git due to over-drinking. But it's the first time that I've collapsed and passed out from over-drinking — never before has alcohol hit me quite that badly. I guess it must have been the combination of the hot weather, the strong drinks, the light Thai dinner, and (most of all) the residual weakening effect of 2 days of diving. So never mind: one tequila, two tequila, three tequila, floor. Beware the crazy substance that is Sang Som whisky, or you too may discover that it's more like: one bucket, two bucket, three bucket, floor.