After our tour of the Pisac ruins this morning, and my questionable-quality gourmet buffet lunch in Urubamba with Jesus, this afternoon I continued on to the last of the three main towns in the Valle Sagrado ("Sacred Valley"), Ollantaytambo. At Ollantaytambo, I climbed and explored the impressive Inca citadel / fortress that's built into the mountain there, right next to the town. In my opinion, the fortress of Ollantaytambo is the most impressive of all the ruins in the Valle Sagrado.

At Urubamba, I said goodbye to Jesus for today, and continued on to Ollantaytambo alone (by combi), as Jesus had to get back to Cusco and take care of some work. Ollantaytambo is at the end of the Valle Sagrado proper: on the other side of the town, the valley rapidly narrows, and becomes too hemmed-in for extensive farms to be built. However, the valley — and the Río Urubamba, that flows through it — continues all the way to Aguas Calientes / Machu Picchu, and beyond. The train to Machu Picchu also continues through the valley, and there's a fairly important train station in Ollantaytambo itself. 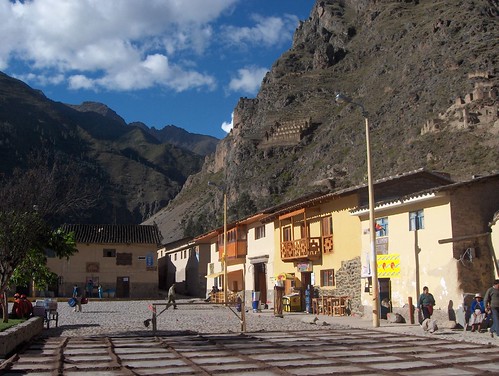 Main square of Ollantaytambo town, with some ruins on the hillside behind.

Unlike in Pisac, there's no hour-long walk (or 10-minute taxi ride) to get up to the ruins from the town at Ollantaytambo. The fortress begins right at the base of the mountain, on the edge of the town. And it's a formidable fortress. So formidable, in fact, that it was one of the few places where the Incas managed to defend themselves in the 16th century, and to win a victory against the Spanish conquistadores:

"The citadel served as both a temple and a fortress, the latter becoming of most importance upon the arrival of the Spanish. In 1536 Hernando Pizarro and his cavalry of 70 men attacked the citadel. Manco Inca, who had holed up his army at Ollantaytambo after the fall of Cusco and Sacsayhuaman, successfully halted Pizarro's initial siege as the Spanish horses were easily repelled by Inca warriors pelting them with rocks and arrows high atop the citadel's stone terraces." 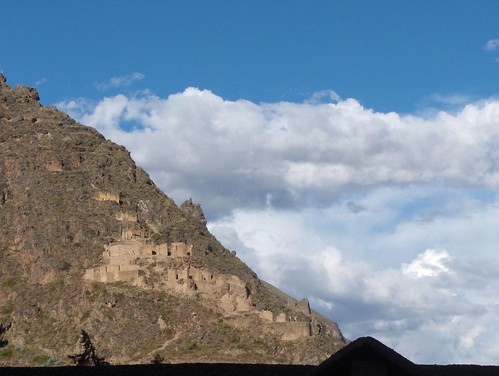 Part of the Ollantaytambo fortress.

I climbed up through the hillside fortress, and explored around a bit at the top. Unlike Pisac, which has more of a sacred, religious feel to it, Ollantaytambo fortress feels rough and rugged. I can see how the Incas managed to repel a seige from within its many walls: the place is clearly built with defence and practicality in mind. No nice, smooth temple walls here: just nice, thick ramparts crowning the mountainside, and no easy way around them either. 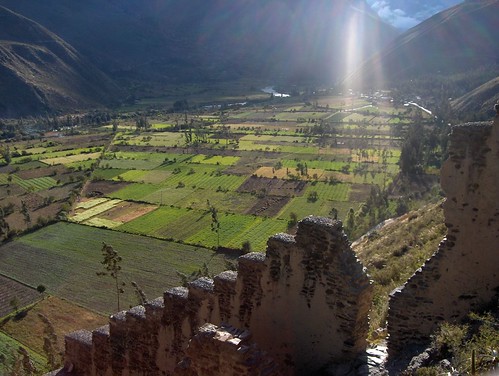 Some of the walls, and the valley continuing on towards Aguas Calientes.

Once I reached the "top" of the fortress, I decided it would be fun to see how much further I could get up the mountain. So I found a path that continued on up, higher than the fortress limits, and followed it for a little while. A few other tourists had the same idea as me, and we bumped into each other along the way. I didn't go all the way to the top of the mountain — it was a pretty rough path, and it was getting late — but I got up high enough to get some nice views of the surrounding ranges. 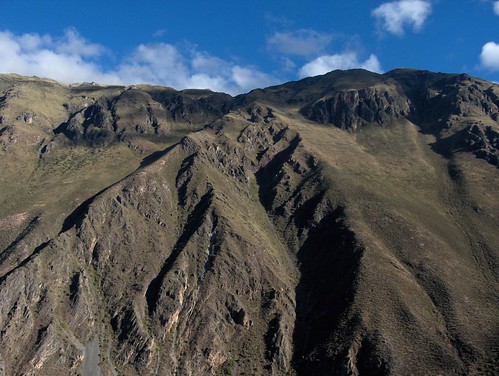 Big mountains all around.