Nikolas and Viktor are two blonde-haired, blue-eyed boys from Gothenburg, Sweden's second-largest city. The two of them are positively nuts about skiing: one of them has worked as an instructor before (for an entire season), and the other was formerly involved in competition-level skiing races; they've both skied for as long as they can remember. They're currently studying engineering at university, back home in Sweden; and they're here in Kitzbühel for what they call "a very short season", a mere three weeks. I met them at Snowbunnys this week; and when I had the courage, I did on occasion go up the mountain with them, and attempt to keep up as they tackled every insane slope they could find. 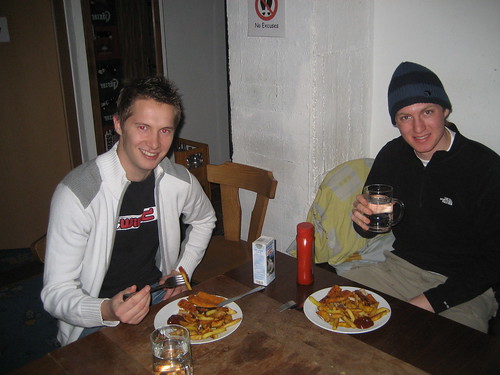 Nikolas (left) and Viktor (right), having a munch at Snowbunnys.