I quickly ate breakfast and packed up this morning — in my field near Pedagaggi that I camped in last night — then managed to sneak out of the farm unobserved (despite the occupants of the farm going along their driveway again, just before I left). As I continued riding north, downhill out of the Monti Iblei, I was greeted with a bitter morning cold (explained by the fact that I was on the road at 8am), but also by lovely, rolling farmland scenery. The other amazing scenery that greeted me, was that which I first saw yesterday afternoon: the Plain of Catania stretching away below me, and colossal Mt. Etna looming on the horizon. I'm going to be seeing Etna all day today; but regardless, I highly doubt that I'll get sick of the view. Put simply, it's a bloody big, bloody nice mountain. 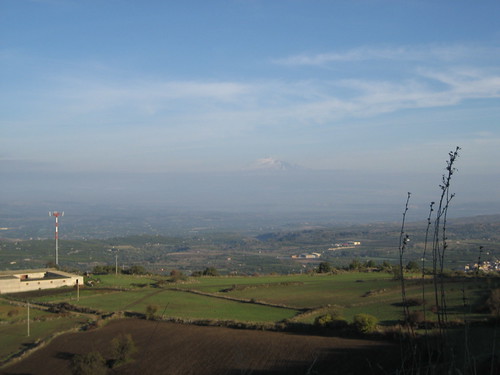 Along with Etna, on this morning's downhill ride I also had the company of many, many windmills. I saw a few windmills around the farm where I camped last night: but it seems that those were just the tip of the iceberg. A few k's further down the road, they were simply everywhere — I must have seen over 100 of them, peppered along ridges, sitting in twos or threes on the hilltops, and clustered between and amongst most of the grazing fields in the area. I saw a sign next to one of the larger clusters, which I believe said that the windmills on these hills are powering the entire (nearby) city of Carlentini. If so, then that's a very impressive claim to fame for a backwater town in rural Sicily: this is a green, clean place. 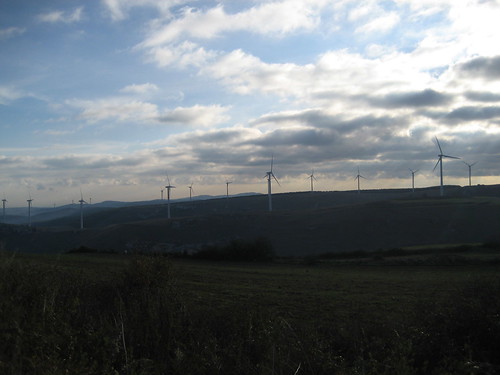 Since I was riding out of the high Monti Iblei, and towards the low-lying Plain of Catania, it was a downhill cruise for most of the morning. I breezed into Pedagaggi at about 9am, having barely pedalled the whole way down. Pedagaggi is a teeny little mountain village: it consists of one main street, a few coffee bars, some squashy old houses, and a few silent locals, who greet passing Aussie cyclists with furtive, suspicious stares. Not exactly much to explore, and even less reason to hang around; so I just whizzed through the village, and continued on my merry way, onto the big plain.

The rest of the morning's ride, through the Plain of Catania, was no big deal: it was easy, flat and boring, with a dash of pleasant sunny weather thrown in for good measure. Views of Etna continued to be impressive along the way; although clouds started building up around the mountain as the morning wore on, making the view deteriorate a bit. I passed by the town of Carlentini, but didn't bother going through it, as it's off the main highway, as well as being built on top of a reasonable-sized hill. I skimmed through the outskirts of neighbouring town Lentini, which (in contrast) is not on a hill, and which sprawls out on the north-eastern corner of the plain with its growing suburbs.

From Lentini, it was a straight road all the way to Catania itself. I ended up taking a highway which is marked as an "alternate traffic route" to Catania — apparently, it's part of an effort to divert some traffic off the larger highway to Catania, during peak hours. Looks like they have some serious congestion problems in the Greater Catania area: not surprising, since Catania's such a big city, and since public transport here in Sicily is so minimal.