For a little Sunday morning excursion, I decided to visit "La Mitad del Mundo" (lit: "The Middle of the World"), the famous spot where you can stand on the equator, 25km north of Quito. Mitad del Mundo is one of the most famous and popular attractions near Quito — and like everyone else who goes to see it, I didn't consider it one of the "must-do" things for my trip, but it was kinda cool to go there.

Following the instructions in my LP, it was pretty easy to get to Mitad del Mundo. Just a quick trole ride up from the Old Town, and a walk across to Av. America, and you can catch a Metrobus that takes you to the northern edge of the city. From where the Metrobus drops you off, you can then get one of the buses that leaves constantly for Mitad del Mundo, sometimes as often as every 2 minutes. All up, took me about 1½ hours to get up there.

As I was warned, it's a kitschy tourist trap; but it's still nice. They've made a big park at the site itself, with a tall stone monument (marking the equator) being the park's centrepiece. Scientists (and anyone with a GPS) are now aware that the monument is actually about 200m off from the equator — but hey, it's close enough. 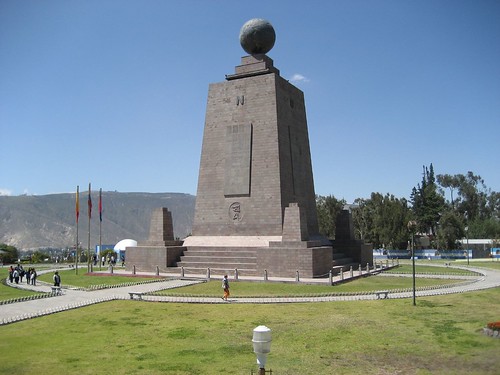 The monument marking the spot that’s (almost) on the equator.

Mitad del Mundo was pretty quiet this morning. I heard that it gets quite busy on Sunday afternoons, when they have live music playing by the monument; but earlier than that, everyone's still in bed. Wasn't much to do there, except snap a few photos, and continue on my way. Also briefly checked out the famous museum "Inti Ñan", where you can stand on the line that is the actual equator (0.00°, as calculated with GPS). They reckon that you feel a bit weaker when you're standing on the line itself, due to the special gravitational forces in play at that spot. I tried it, but felt pretty much the same. Anyway, didn't spent long in Inti Ñan, as they tried to force me to take a guide for $3, which I didn't want to do (didn't want to pay, and didn't want to listen to a guide). 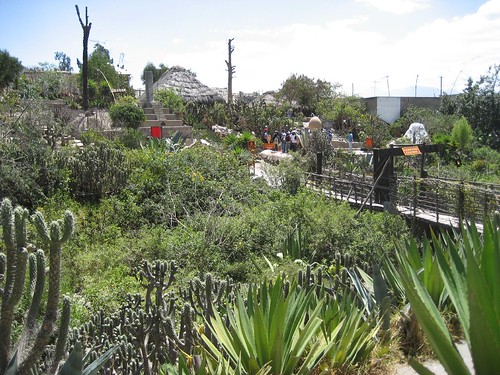