Our first stop on this morning's boat ride was Los Uros, the famous floating islands of Lake Titicaca. The Uros people constructed and moved to the islands hundreds of years ago, in order to escape Inca domination on the mainland. The islands are artificially built out of reeds, which constantly rot and need to be replaced, in order to keep the islands in existence. Amazing place, and certainly a very unique setup. 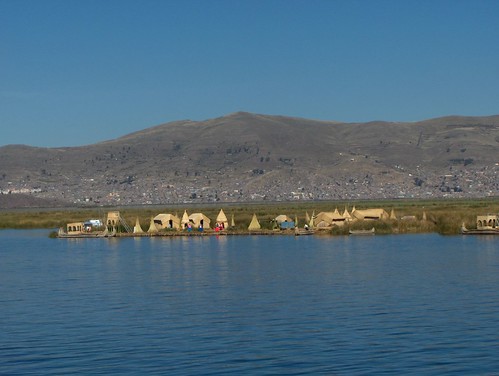 Why live on real islands, when you can build your own?

Los Uros are pretty cool, but they're also a complete tourist trap. Since they're the prime attraction for people visiting Puno, they get literally hundreds and hundreds of visitors coming in by boat every day. There also isn't really anything to do on them, as such. After spending about 20 minutes on them, thinking "gee, this is cool, I'm on an island made out of reeds", you've kind of exhausted the repertoire of available activities in the area.

Our boat stopped by on one of the Uros, and let us off to explore around. First, we were given a little lecture by one of the locals, about the history of the islands, how they're made, how they're anchored in place, and what kind of life the people lead on them. The local guy also, alarmingly, pulled a big square of reeds out of the ground beneath our feet (a maintenance access point?), and then dropped an anchor and rope into the water that lay under it. He demonstrated that the water below was about 15m deep. 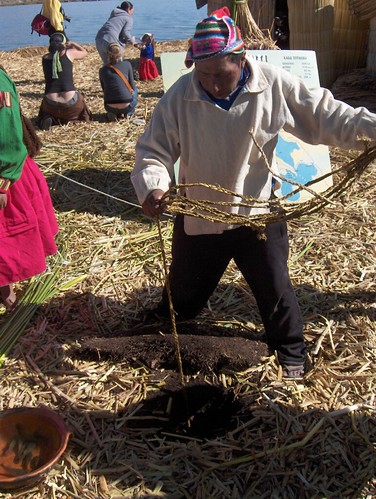 There were, of course, also no shortage of men and women, young and old, selling all manner of trinkets: from hats to miniature boats, and from cigarettes to fresh breads. One thing that we couldn't help but laugh at, was that these locals were wearing the cleanest clothes that we'd seen on any local folk, in all our wanderings around the Latin World thus far. 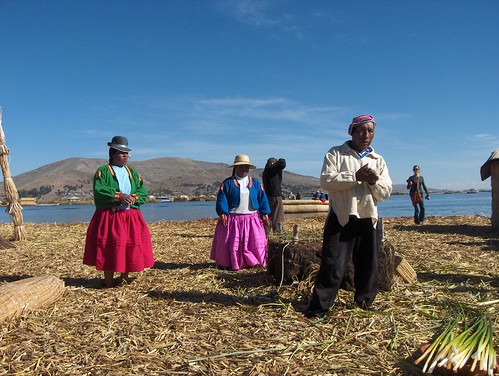 Perhaps they perform the traditional age-old ritual of taking their clothes to the Puno dry cleaners, in order to look their best for the gringos?

We also went on a quick ride in one of the traditional reed boats of the Uros people, from one island to another one nearby. Despite just being made out of local plants, these boats are pretty sturdy, and they're powered by two young boys with two massive oars. While we were on the boat, a little choir of 3 little children came up onto the top deck, and sang 5 different songs for us: one in Aymara, one in Quechua, one in Spanish, one in English, and one in French (after which they did, of course, expect tips). Kind of cute: but the kids were also really obviously bored, with something that they're clearly made to do every single day. And boredom isn't so cute. 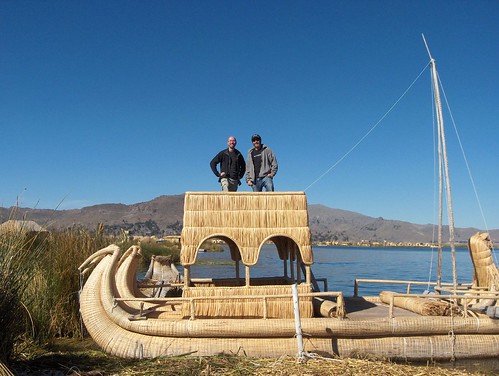 Atop the reed boat.

Los Uros are so overrun by tourists, they even have a little "lodge" on one of the islands, where you can stay inside a tiny teepee made out of reeds for a night, at a fairly high price. I imagine that they would have been really cool about 50 years ago, when the people really did have almost no contact with the outside world, and when they knew no other life but the islands. Today, however, when they're clearly putting on a daily show for the tourists, and when you can peek inside someone's private hut on the islands, and see a local watching satellite TV, it's not so amazing.