Lord of the dive

I did my third and fourth dives this morning, and they're the final dives that I need to do as part of my Open Water course. Today's drill was pretty similar to that of the diving yesterday morning: on the boat by 7:30am; one dive at The Twins, then over to White Rock; and completion of the remaining handful of PADI-required underwater exercises. My group had Ber as our instructor today, instead of Flav, and we descended a bit deeper than we've done previously: we made it to 18m, which is the maximum depth permitted for an Open Water certified diver. 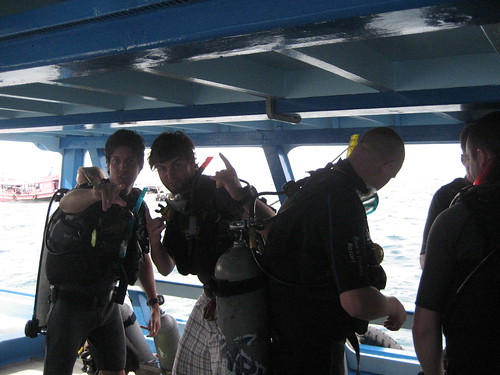 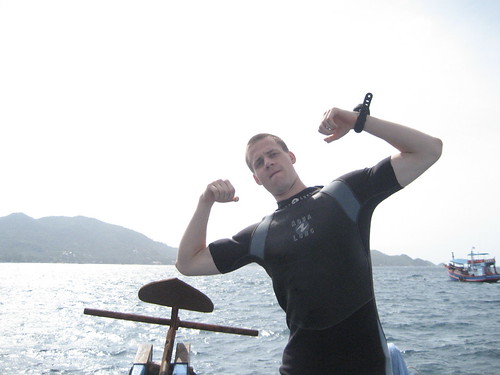 Alex displays his upper body strength. Or is he trying to say: “it was THIS big!”? 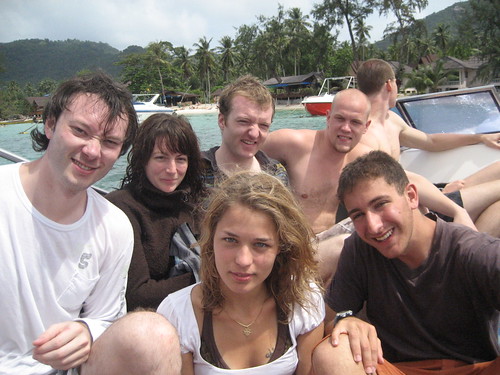 The crew, headed back to Sairee — Caroline made it for the diving today.

I must say, I enjoyed today's dives more than yesterday's. The fact that I'm getting used to the underwater environment may have something to do with it. Or it could just be the fact that we saw some really cool fish today: bigger, more colourful, and more intrepid than those we encountered yesterday; as well as some massive schools that numbered in the hundreds.

Nevertheless, the same old hurdles came back to haunt me: descent and equalisation was still a painful and unpleasant ordeal — and the fact that we descended deeper today, only made it worse. I'm now officially a PADI Open Water certified diver: but for the life of me, I really don't feel like one. I feel pretty useless underwater, and I doubt that I'll ever get as much out of diving as do others, who are seemingly born to hit the depths. Perhaps I'll do diving again someday — but for now, I don't think it's for me.