It was a long evening, getting out of Barcelona and back to London tonight. A long bus ride to yet another dodgy Ryanair airport. A long wait once at the airport. And an extremely long delay once we'd arrived back in dear old Inglaterra. Exciting, ridiculous, and heated at times. But most of the way, just long and extremely tedious. Travelling in Europe during the Christmas-break rush, and getting stuck right in the thick of that rush, simply ain't fun at all.

After saying goodbye to the Kabul hostel, I caught the Metro without problems (wasn't crowded or anything), from Liceu up to Barcelona Nord bus terminal. From there, I had to catch the "Barcelona Bus", the Ryanair-affiliated bus that provides transport from the Barcelona city centre, over to the faraway and dodgy Girona airport. Naturally, Ryanair wouldn't dream of using the main Barcelona International airport: instead, they use Girona, which is quite literally in a different city, and which is over an hour away from Barcelona by bus.

I had a lot of difficulty working out where to buy the ticket for the Barcelona Bus, once I reached the bus terminal. First, I tried jumping on the bus and paying with cash on-board: the driver would have none of it; he told me to go in the terminal, and to buy a ticket there. I tried about three different ticket windows — in different sections of the poorly signposted terminal building — before I finally found the Barcelona Bus window (and once again paid almost as much as the cost of the flight, for a ticket to the airport). And I then had to join the long queue out at the bus stand, before I could actually get on the bus and travel to the airport. I tell you, it's lucky I arrived at the terminal about an hour earlier than I originally intended: if I'd gotten there late, I might not have reached the airport in time to check-in.

The ride to Girona was long and uneventful; and as soon as we arrived, I poured off the bus along with everyone else, and rushed into the terminal building. Then, I had to once again do the trick that I'd learned in such a hurry during my previous Ryanair flight (a week ago), and unpack half the contents of my backpack into two large plastic bags, in order to get my backpack under the stingy 15kg checked baggage allowance. The check-in area at Girona airport was totally packed — every counter had a mile-long line of patrons — but I arrived so early, that I joined the queue about 20 minutes before check-in opened for my flight, and as such I was towards the front when they started issuing boarding passes and accepting baggage.

In contrast to the check-in lines, the line to go through security at Girona wasn't too bad: once I'd guzzled down the contents of my water bottle (as the usual no-liquids bulls$#% was in force here), I was straight in and out the other side. After that, I had about 1½ hours to kill; and I killed them by munching on some dinner, and by reading.

When it finally came around to boarding time — at 9:50pm, 30 minutes before our scheduled 10:20pm takeoff — things got really crazy, when we experienced that can only be called "gate madness". My flight to London Luton was listed on the screen as boarding at gate 3; and another Ryanair flight (at the same time) to Pisa was listed as boarding at gate 7. But for some reason, just before boarding commenced they decided to swap gates for the boarding of these two flights. So everyone on my flight scrambled over from gate 3 to gate 7: and to our surprise, we found that there was already a massive line at this gate, comprised of abotu 200 Italians. Then, suddenly, the gate change was also announced for the Pisa flight: and like a tidal wave, the 200 Italians let out a tremendous roar, and like a safari stampede this horde raced away from gate 7, and headed over to gate 3 (where we had all come from). What a gawddamn circus! You had to see it to believe it: it was the most hilarious, and the most ridiculous thing I've ever witnessed at an airport. I bet that in a dark control room somewhere in Girona airport, there was a dude sitting at a computer screen and laughing hysterically at the chaos that he'd set off.

The flight itself, from Girona to Luton, was the usual Ryanair balagan. As with last time, it was a mad scrum to board the flight; we had to walk across the tarmac to actually get on the plane; the safety video finished 5 seconds before the engines went full-throttle; and take-off and landing were unnervingly rushed and rough-and-tumble. All but one of the flight attendants spoke no Spanish: pretty pathetic if you ask me, considering that we were flying out from Spain. Due to my flu, which I've still got, I felt absolutely terrible during our descent to Luton: my sinuses became even more blocked than usual; I almost completely lost my hearing; and I felt like my head was going to explode from all the built-up mucus inside it. Charming experience.

The fun didn't stop there, though — oh no, the night was only just getting started. When we entered the terminal building at Luton airport (Luton being yet another super-dodgy far-away Ryanair airport — it's more than an hour north of London), we joined what I believe is the longest airport queue I've ever encountered. Almost as long as the queue that I saw at the Vatican in Italy, a few months ago. It was the queue to go through UK passport control: something that as far as I'm aware, they shouldn't even have anymore; since no other countries around here have it, for flights within the EU. 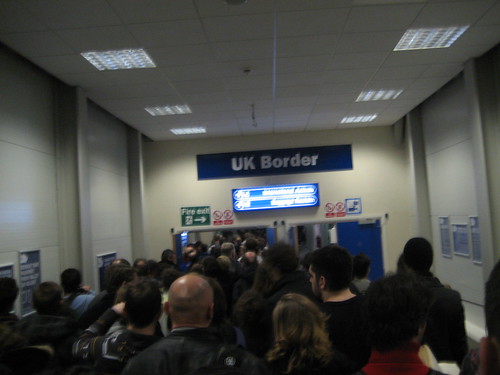 Our oh-so-hospitable welcome back to England: a big ugly sign saying “UK Border”, and an even bigger and uglier queue for passport control.

Seriously, what is the UK's problem — are they part of the bloody EU or not? Considering the big "border" sign, and the rigorous-as-ever passport control (complete with interrogative questions and all), it appears that they're not exactly embracing this whole "European unity" concept with all gusto. Anyway, it was quite ironic: once we got through the worst of the queue, we could see that there were actually two lines: one for EU citizens, and one for other citizens; and the non-EU line was much shorter! So, as an Australian passport holder, I was able to enter England much faster than all the holders of EU passports — that gave all the Whingeing Poms in the line even more to complain about, of course.

The wait at Luton was horrific; and even worse, were the regular announcements stating the unbelievably obvious: "attention passengers, due to the peak holiday travel period we are currently experiencing some delays". Um, yeah — no s$#%, Sherlock! They didn't do very much to placate the angry mob in the queue: although they did at least come through the queue, and invite any passengers with infant children to come to the front and to be processed first. They could have at least played some music, or something.

The fun continued, when I finally got through immigration, collected my backpack (and re-packed it), and exited the terminal to catch the "Green Line" bus into central London. By this time, my watch read 12:30am — getting rather late, if you know what I mean. Well, the hour was only going to grow later: because the queue for the Green Line bus was yet another whopper of a long one. I was quite lucky: when I joined the queue, there were only about 30 people in front of me; but by the time I got on the bus (at 1am), the queue was at least 100 people long. And worse still, the bus was only running once ever half-hour! Plus, the train into London terminated at 12:30am — so short of getting a lift or taking a taxi, the single Green Line bus was (for most people) the only option.

The Green Line (route 757) into London was yet another long, tedious and overpriced journey: we made it to central London by 2:15am, at which time the bus dropped me off at Hyde Park Corner. From there, I had to wait another 15 minutes, before I could catch a city night-bus down the road to Piccadilly Circus (since the Tube had long-since closed for the night, and since it was a 1-mile walk). Finally, I made it to my hostel, and I was asleep by about 3am — lucky that the hostel's reception is open 24/7, and that they allow check-in until about 5am every night; otherwise I would have been stuffed.

In summary: it was a very tedious and drawn-out trip that I embarked on this evening; one that was characterised by long queues and by holiday masses, at every bend in the road. The queues were so bad, that many people probably didn't get home until 6am the next morning (and many of them have to go straight back to work). Ryanair is useless (I don't particularly want to fly with them ever again); the UK border is unwelcoming; and England is cold and miserable. Anyway, at least I got here.

I think the equivalent of Ryanair here is Jetstar, so if you ever need to travel by air once you are back in Oz, the way to go is Virgin Blue, nearly as cheap as Jetstar and great service. And Virgin actually flies into the main airports and not some place which is 100 kilometres from the nearest city. After 3 trips to Melbourne in 6 months, I can highly recommend them.

You could have used Easyjet

Had you used EasyJet, you could have avoided Luton and travelled from the Barcelona Airport to Gatwick and the flight crews are usually pleasant.

Immigration Controls exsist at the border because the British and Irish have not signed onto the Schengen Treaty that created the Schengen Area which does not have internal border controls. Ireland and Britain do not have internal border controls as they are part of the Common Travel Area that predated the EU. Given the number of illegal immigrants who try to hope in through Dover on a daily basis it would be like Australia allowing everyone from Asia in without any control.