Today, I finally met my Lima-based friend Antonio Ognio, the king of all Peruvian Linux geeks. As an introduction to his home city, Antonio suggested that he take me to a nearby all-you-can-eat buffet — serving a wide variety of popular local dishes — and that he give me a small walking tour of Lima. Turned out to be a great day.

I met up with Antonio in central Miraflores, just outside Parque Kennedy, and then we caught a combi a bit further north. Up until this point, I'd only caught the combis that go up and down Av. Arequipa, between downtown Lima and Miraflores. But the combi network is much more vast and complicated than that: you can use it to get virtually anywhere in Lima.

We had lunch at an all-you-can-eat buffet restaurant. Great deal, but make sure you bring a big appetite. They have three main types of cuisine at this place:

I managed to get through 2 full plates — one of Andean food, and one of chifa — but I couldn't finish my ceviche plate, due to both being full, and to my lack of preference for seafood. But all the food was delicious, and I left having more food in my stomach than I previously believed it was possible to fit inside. 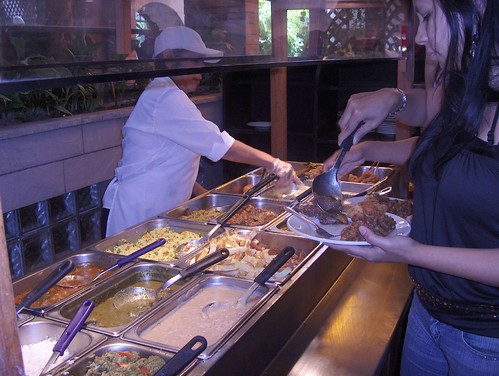 One of the massive buffet tables at the restaurant.

We continued the afternoon with a small tour of Miraflores. Antonio showed me one of the archaeological sites inside the city of Lima — this one was some sort of pyramid-like structure, built of adobe bricks, and half-buried by a mound of rubble. We didn't go inside, but we could see a fair bit from the street.

We also had some fantastic ice-cream, at a little heladeria in Miraflores. To finish off the tour, we went to the Inca market, and perused some of the fine Alpaca garments, and other (massively overpriced) souvenirs on display.