This afternoon, Patrick and I continued on from the village of Zumbahua, to the main attraction of the Quilotoa Loop area: Laguna Quilotoa. When we got to the lagoon, we admired the view from the top, and then we decided to complete the walk down into the valley (i.e. the ancient volcano crater) where the lagoon lies, and back up. It doesn't look like that big a walk — but it actually turned out to be quite a hike: took about ½ an hour to walk down, and another hour to return to the top. Beautiful place, with serenity abounding.

When we reached Zumbahua at lunchtime, we learned that there were no more buses from Zumbahua to the lagoon today: they only run earlier, in the morning. Hence, our only option for travelling the 14km to the lagoon (apart from walking, which would have taken at least 3 hours — more time than we could afford to spend) was to accept a ride in the back of a pickup truck, from one of the locals. A plethora of villagers offered to take us there — they've made quite a little business out of it — and we managed to agree on $4 for the both of us, from one of these guys. Was great fun, sitting in the back of the truck, enjoying the scenery and the breeze along the way. 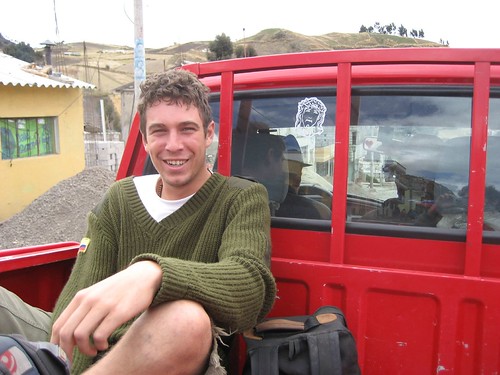 Patrick in the back of the truck.

We weren't sure if there'd be anything when we reached the lagoon (apart from the lagoon itself, of course): but as it turns out, the area by the lagoon has started to be developed a bit, and there are some hotels and restaurants right next to it. However, they don't look too appealing: very tacky and touristy. There were also plenty of tourists already at the lagoon, when we got there (a lot more than we saw in Zumbahua) — most of them were there on a day tour, and had a tourist bus to take them there and back. The lagoon itself looks stunning, from the top of the crater. 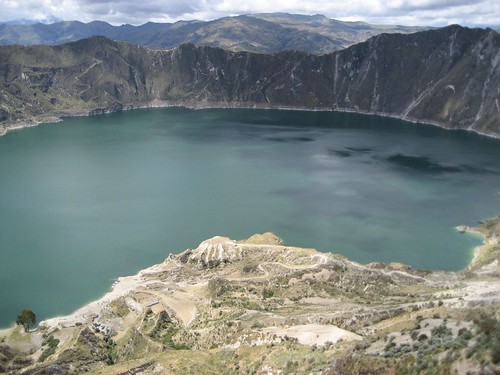 Laguna Quilotoa, as seen from the top of the crater.

After enjoying the panoramic view from the top, we decided to begin the descent into the crater, to the shores of the lagoon. It was quite easy walking down — naturally, it was downhill all the way — and we had plenty of company, in the way of fellow tourists. We also saw some crazy guys about ⅔ of the way down, some of whom were riding down the steep and rocky path on mountain bikes, and some others of whom were filming their mates with chunky cameras. They said that they were making a film, which they'll be taking to a sport and adventure film festival in a few weeks' time. Looked like they were having fun: I wish them the best of luck for the festival. 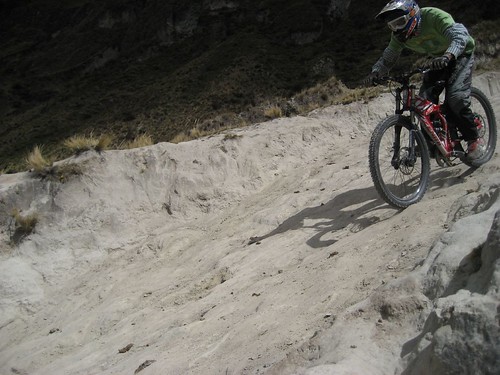 Hardcore biker going down the path to the lagoon.

It was quite beautiful at the bottom, and nice and serene as well. There were a few people going out on the water in kayaks and rafts; but it's so cold and protected up there, that they were hardly disturbing the still waters at all. There were also a horde of locals at the bottom, tending to a collection of donkeys, which they were offering to all the lazy tourists who didn't want to climb back out of the crater. As usual, I had no problem saying no to them. 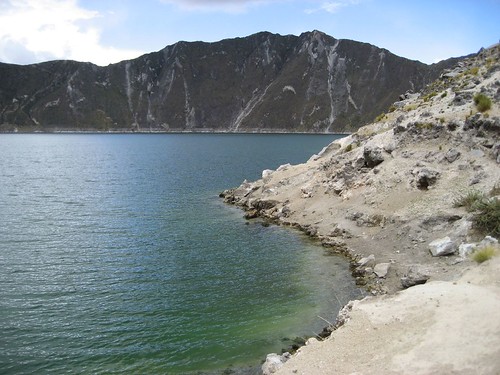 The lagoon, by its shores.

Sadly, we got rained on a fair bit while we were down at the bottom, as it suddenly decided to drizzle for a few minutes. The rain prompted us to make our way, slowly and tediously, back up to the top. It was a hard walk — made more so by the patches of deep, soft sand in many parts of the track — but we managed it without too much hassle.

Once back up and out of the crater, we attended to the task of finding another ride, this time from the lagoon over to Chugchilán. And once again, we had no choice but to pay a local to take us in the back of his pickup truck. This time, the locals tried to rip us off big-time — I guess they can get away with it, since they're taking you out of the lagoon, which is a big tourist attraction — they started by offering us a lift for $30. Managed to bargain this down to $16, but it was still a high price. Anyway, it was another quick and fun ride, and we got to Chugchilán in time to find some accommodation, and to settle in for the night.