When I realised that I'd gone the wrong way this morning — to the Pisco high camp, instead of to the famous Laguna 69 — I thought that I wouldn't be able to make it to the laguna today. But as it turned out, I was able to have my cake and eat it too: I made it to Laguna 69; and boy, was it worth it. Quite a stunning place indeed.

The guys at Refugio Peru pointed out to me that there's a path, which runs from the Pisco high camp over to the laguna. It's a very high path — over 5000m for most of the way, and much more difficult than the regular path to the laguna — but they said that I should be able to do it in two hours. 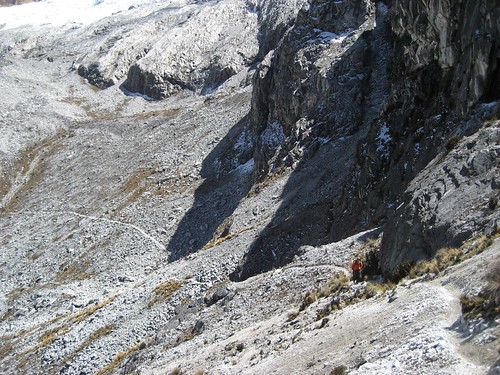 The high path to Laguna 69.

The path was really difficult to follow at first — just a maze running through a minefield of big rocks — but after the initial bad start, it turned out to be very clear, and not too much hard work. At the start of the path, I bumped into an American guy who was also on his way to the laguna: but since I was in a real hurry, and since he just wasn't going terribly fast, I had to leave him behind. Anyway, they said it would take me about 2 hours to reach the laguna, and I did it in 2½: not a bad effort. 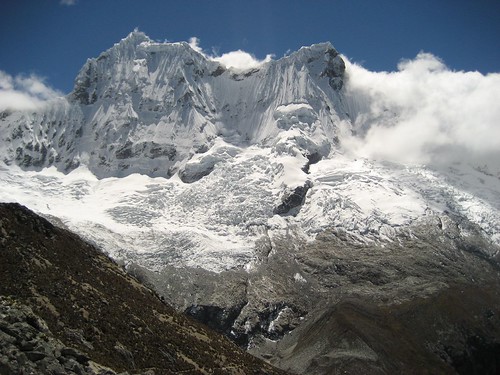 It was worth taking the high path, for the spectacular scenery.

Following the initial rocky maze, the path started out very steep, ascending well into a snow-prone altitude (although there was very little snow or ice on the path, the whole way), and getting up to the high ridges. Lucky I left my big backpack and my tent down the bottom, at Cebollapampa — this path would have really sucked, if I was schlepping all that stuff. After that, it was relatively flat for a long way, following the high mountain ridges, and offering great scenery of the snow-capped peaks all around.

The path went at high-altitude (i.e. 5000m+) for so long, that I began to wonder if it would ever start to descend. But it finally did descend, not long before the end (and quite steeply, too): and when Laguna 69 finally came into sight, I was taken away by this spectacular mountain lagoon, which I was fortunate enough to see from my special, high-up vantage point. 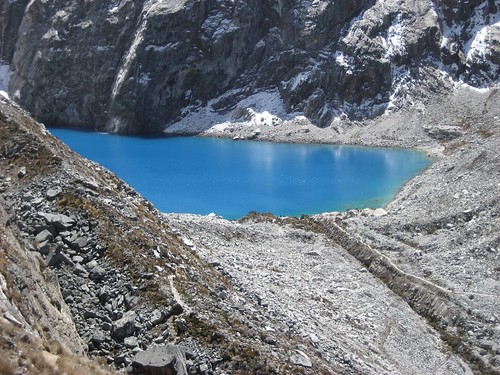 I made it down to the laguna by about 12:30pm. I gave myself ½ an hour to have a snack — not a proper lunch, as I left that back in my tent at Cebollapampa — and to relax and to bask in the serenity. There were a few other people at the laguna: but considering that it was Sunday lunchtime, and that it's the most popular day-hike in the Huaraz area, there weren't that many. Maybe they get more people during the week? Or maybe it was just quiet, because of this being 28 de Julio (Peru Independence Day) weekend. 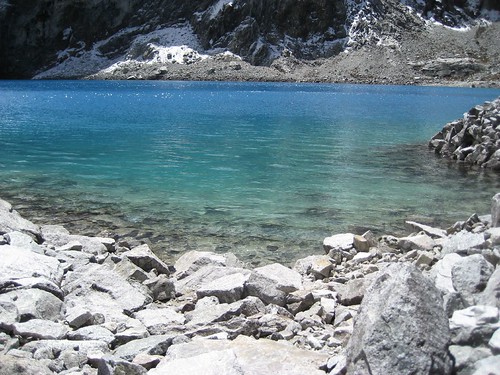 Waters of the lagoon, a bit more close-up. 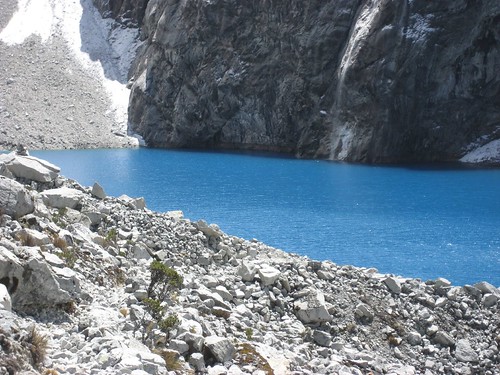 What do they do to this water, to make it so heavenly blue?

I walked back to Cebollapampa along the normal valley path (the one that I couldn't find this morning), which usually takes 2 hours or more, but which I did in just over 1½, due to my rushing to get back to camp. Probably rushed more than I needed to — but oh well, I thought that all my morning detouring had made me quite late. Plus, I wanted the rest of my lunch! More beautiful scenery, on the way back through the valley — which, additionally, was pleasantly downhill all the way. 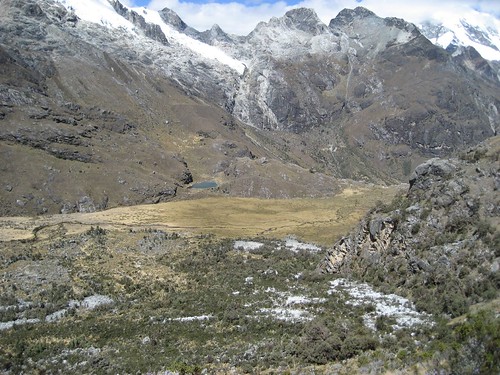 Scenic path down through the valley. 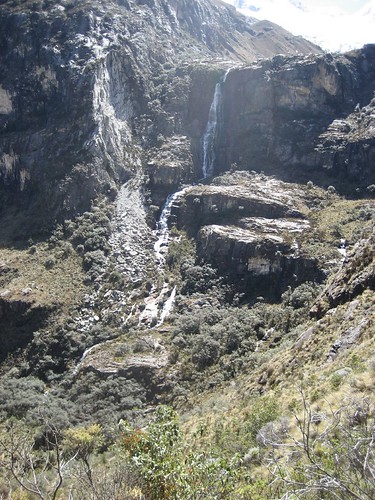 Nice waterfall in the valley. 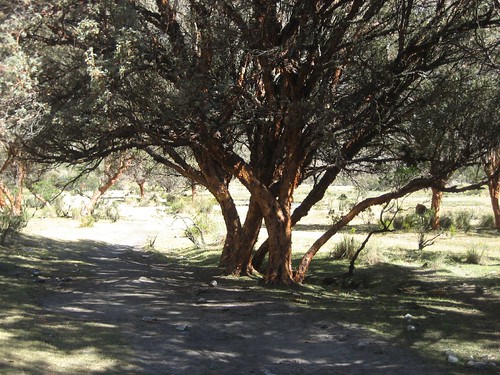 Lovely little redwood trees — they’re all over the place around here.

Dunno why, but it turned out to be Aussies all the way, hiking back from the laguna this afternoon. Met two Aussie girls, who I overtook on my hasty route back. Also met a very well-travelled old couple from Budgewoi — not far from Wyong, on the NSW Central Coast (just north of Sydney). They said that this is their sixth visit to South America, in 6 consecutive years, and that they just can't get enough of all the hiking and adventure to be had, especially here in Peru and Bolivia. Good on 'em, I say.

Once I got back to Cebollapampa, that was pretty much the end of my 5-day Santa Cruz-Llanganuco hike. I dove into my lunch (the rest of last night's rice and tuna — never tasted so good!), packed up the rest of my gear, and then walked the 5 minutes out of the campsite, and onto the main road. Managed to get an amazing deal, for my transport back to Huaraz: s/10, for a direct ride back in a private taxi!

Went with two French people in the taxi: they insisted on going back only to Yungay (from where you can get a cheap combi ride, the rest of the way back to Huaraz); but the taxi driver clearly needed to get back to Huaraz desperately, and to take as many people with him as possible; so he offered us s/10 each for the ride, when he was originally going to charge me alone s/20 for it. Not a bad deal: although considering how far the ride was, I felt a bit bad, as it was basically bordering on highway robbery.

Turned out to be a bigger day than I'd planned on — a lot of tough walking, when I thought it would be a very easy-going, final-day walk to Laguna 69 — but it was great fun, and a great end to an amazing hike.