This afternoon, for my first day here in Pucón, I decided to go on a bike ride over to the nearby Lago Caburgua ("Caburgua Lake"). I had wanted to leave a bit earlier, and to get some supplies (e.g. backpack, sunnies, water) — but since I couldn't get into my hostel, I couldn't get those things, and I got delayed and didn't set off until about 3pm. Despite those hiccups, however, it was a lovely ride, and I made it back in time to avoid the onset of night.

I hired the bike from Sierra Nevada, a tour agency right in the middle of town, that Peter (owner of the hostel) recommended to me. They were pretty good: although the bike wasn't the greatest I've ever ridden (gears played up a fair bit), the brakes worked well; and they gave me all the accessories to boot (helmet, spare pump / inner-tube, etc). Plus, they were nice enough to lend me a backpack, since I couldn't get into the hostel to get mine. And they provided me with a little map, of the route that I had to take to get to Lago Caburgua and back. 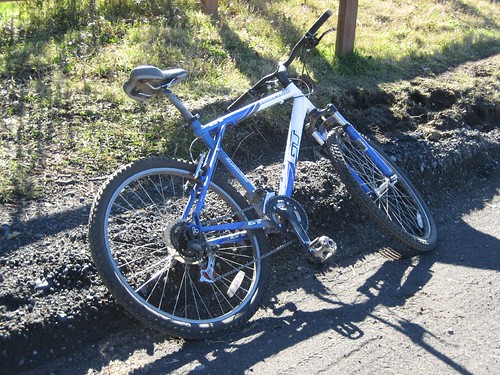 The first 15 minutes or so, I was just riding along the side of the main road, heading south out of town. They have a nice little sealed bike track, that hugs this road to the edge of town: seems to be quite heavily used by the locals, as well as by tourists. Very easy on this first bit: straight and flat the whole way — although there was a lot of pedestrian and fellow-bike traffic to look out for.

Just where the bike track ended, I saw the sign that the Sierra Nevada guys told me to look out for. The sign read "Aeropuerto", and an unsealed road forked off to the left, just where it was planted in the ground. I turned left onto this bumpy, country road, and the main part of the ride began.

Most of the time, this secondary road wound through the countryside around Pucón, providing access to little farms and holiday retreats. Not sure where the "aeropuerto" ("airport") was, that the sign on the main road pointed to — didn't notice one as I was riding. Anyway, quite early on during the ride down this road, I got to a rickety old suspension bridge, that arched over a lazy river below it. Was a good little challenge riding over this baby, with its rather large holes between the wooden floor planks in many places. It also had a lovely, welcoming big sign next to it, that said in big words: "Peligro!" (lit: "danger!") :P. 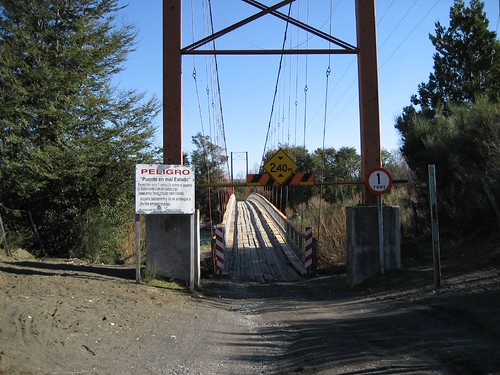 It was about 1½ hours of riding, all-up, along the unsealed-road section of the ride. Not particularly easy, most of the way: quite a few little uphill bits, and the terrain was a bit rough. But the road wasn't too bad, all things considered; and the scenery more than made up for it. Lovely temperate forest, meandering rivers, and stately country villas the whole way: very old-world European, and quite a treat for an Aussie like me.

Charming villas along the way.

The final stop on the unsealed section, before I hit the main road once more, was the spectacular site of "Ojos del Caburgua" (lit: "Eyes of Caburgua"), a set of twin waterfalls that are fed by further-up Lake Caburgua. When I arrived at the entrance to the falls, there was a sign saying that I had to pay, and listing the entrance fees for various different types of vehicles (including for bicycles). However, there didn't seem to be anyone there to collect the entrance fee. There was another tourist standing by the gate, and when I asked him if I had to pay, he said: "I don't think so, just go in". Well, that's a first for South America: a sign listing the fees, and nobody there to collect them! Usually, it's the opposite: there's almost always someone there to collect your money; but seldom a sign to confirm whether or not that person is telling you the right price (or, indeed, whether or not there's a fee at all). Chile really is a weird place!

So I went right in, and cycled down the little track to the waterfalls. There were a group of 4 German girls at the bottom, preparing to leave when I got there — also with bicycles — but otherwise, I had the place to myself. The waterfalls themselves are beautiful, as is the river that feeds them and that runs off from their base. And all around is a nice little picnic area, enclosed by light forest. 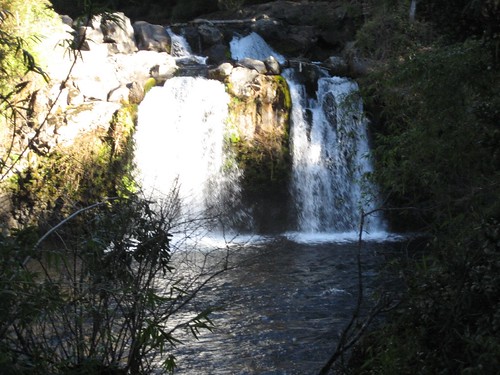 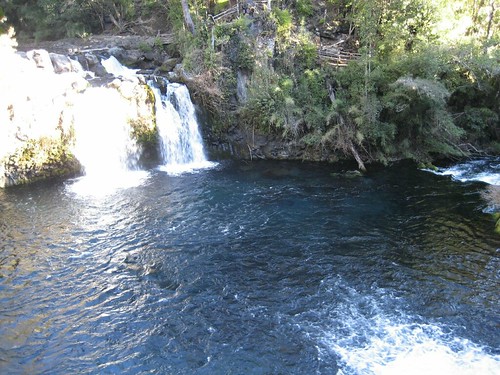 Waterfalls and the river. 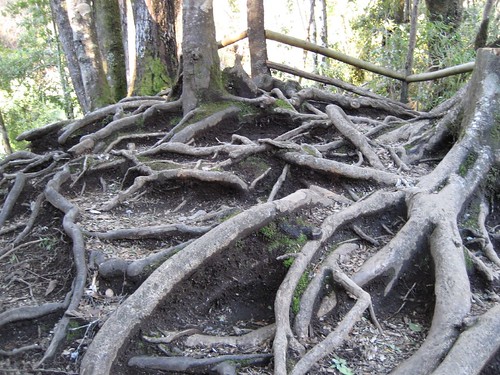 Massive tree roots on the lookout over the waterfalls. 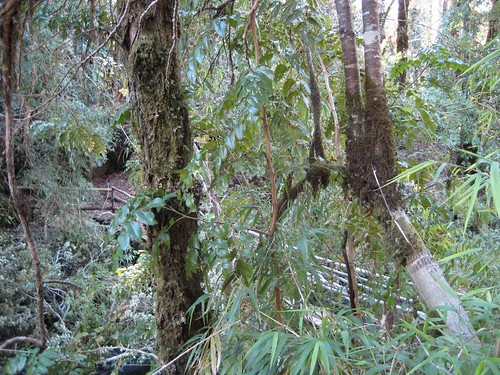 Nice trees around the falls.

From the falls, it was about another 15 minutes or so of riding, until I hit the paved road once again. By this time, it was about 5pm, and I remember the guy in the tour agency telling me that I might not have time to make it to Lago Caburgua itself. But despite this, I thought "what the hell, I'll give it a shot". So I turned left, and tackled the 5km or so that remained to reach the lake.

Wasn't the wisest decision I've ever made. It may have only been 5km, and it may have been sealed road; but it was still a fairly tough uphill slog, and I took it faster than I should have (since I was worried about the time). I also didn't have any water with me, and I really could have used some. When I finally reached the top of the hill, and was almost up at the lake, I stopped at the only shop on the road that was open. The man in the shop had some chocolate for me, but the daym fella only had agua con gas (i.e. "sparkling mineral water", or "soda water"). And I hate that stuff — couldn't drink it unless I was about to drop dead from thirst (and even then, only at gunpoint). And I wasn't quite that thirsty. So I soldiered on. 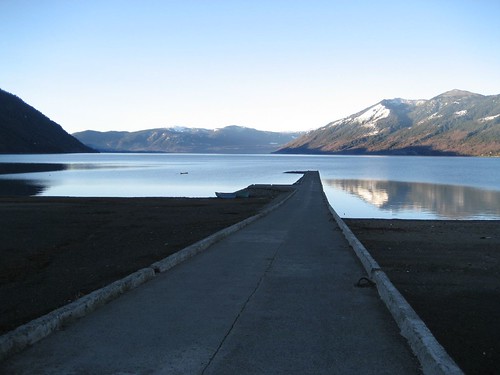 When I made it to the shores of the lake, I decided that it was well worth the final hurdles. It's a very beautiful lake indeed. And at the end of the day, in wintertime, it's also incredibly tranquil. Would love to have stayed, and to have spent some time basking in the serenity; but sadly, I had to immediately make my way back to Pucón, as the day was waning and I was almost out of time.

The good thing about a slow and difficult uphill, is that it makes for an easy and rapid downhill. And that's exactly what it was, from Lago Caburgua all the way down to the main road: downhill all the way. But this can be good and bad. It was very fast, but it was also very cold! Immediately after 5:30pm, the temperature in the area dropped rapidly; and I started to really notice that the trees around me were brushed with snow, and to understand why. Anyway, it was a bit warmer once I made it back to the main road; and from there, it was about another hour of straight, paved, and gently sloping downhill road, all the way back to Pucón. Had a great view of the sunset, about halfway through this ride back. 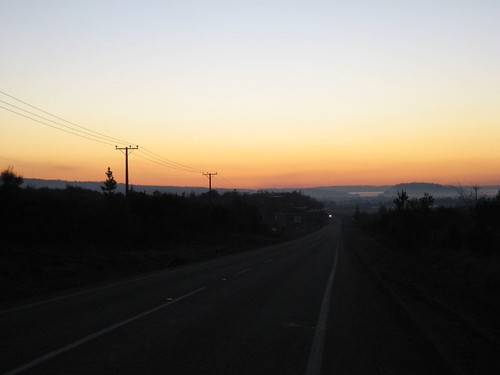 So, if that was the view when I was halfway back, you can imagine what a frantic ride it was, going the rest of the way back! Very much a race against the onset of darkness. Anyway, I made it back to the edge of town before the light had completely gone; and once I was in town and back on the side-of-the-road bike track, there were some streetlights to keep me company. There were also a lot of other cyclists at this time of night: and apparently, for the locals around here, it's perfectly normal to ride around just after sunset, without a light or a helmet, and to just make out the silhouettes of other bikes before you crash into them. Luckily, I made it through this landmine of a bike track, without hitting anything (i.e. anyone) too explosive.

I pulled in to the tour office by about 7pm, and I tell you, I wouldn't have wanted to make it much later than that. Anyway, it was a great afternoon's ride: Pucón is a lovely area to cycle around, and the scenery along the way was very memorable. Will have to do some more rides around here another time, if I get a chance.

‹ Locked out in Pucón Hot springs near Pucón ›
Filed in: Pucón • Cycling • Stunning • Just in time