Kwak... and I forget the others

Turnhout may be a small and insignificant town; but if you're there with the locals, and if you're willing to hit a few pubs, you'll find that it sure as hell ain't sleepy on a Saturday night. To my great surprise, tonight was one of the biggest nights I've had this year. I drank more beer, more types of beer, and a higher quality of beer than I've ever drunk before in my life; and hopefully (in the interests of my own health and sanity) more than I'll ever drink again. After our greasy local dinner, we returned to Turnhout; and while Annick and Karlijn retired back home for the evening, Stef and I began a long and sustained night of beverage-sampling, that spanned several pubs and numerous brews. After tonight, I haven't yet conquered all 500+ of Belgium's beers; but I believe I've made a solid dent in the landscape, and a promising start.

Here in Belgium, it's traditional for every different beer to have its own unique glass, and for each beer to always be served in that glass (hence, pubs that offer 100 different beers need to also possess 100 different sets of glasses). The glass is as much a part of the "brand image" for each beer, as is the beer itself — and according to the Belgians, each glass is also carefully designed to perfectly complement the beer with which it's marketed. The first pub that Stef brought me to was a "specialist in a wide variety of local brews" — and, accordingly, they advertised a whopping 300+ beers on the menu: that means that behind the counter, they must have 300+ corresponding sets of glasses! 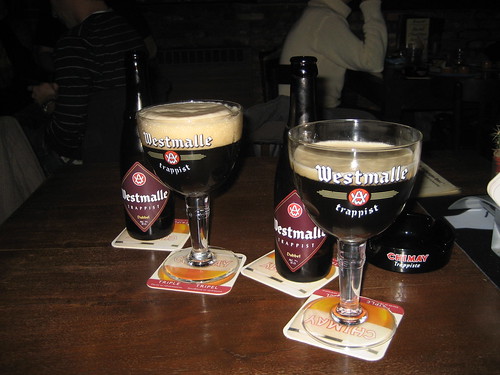 Westmalle: one of the beers that we sampled in the first pub, served in the proper Westmalle glasses.

Of all the beers that I tried tonight, Kwak is easily the most memorable. As well as tasting great, Kwak is also served in a very distinctive glass: it's round and bulbous at the bottom, and egg-timer-ish the rest of the way up; and it's fitted into a big wooden holder. Looks like some kind of bizarre experimental test-tube setup. The beer gets its name from the funny thing that happens when you drink it: once you're about halfway through your pint, a bubble of air is able to sneak into the vacuous space at the bottom — with the result being a loud and funny "kwak" noise. Of course, by the time you get to the kwak, you're so drunk that it seems triply hilarious — which I guess is the point of it after all. 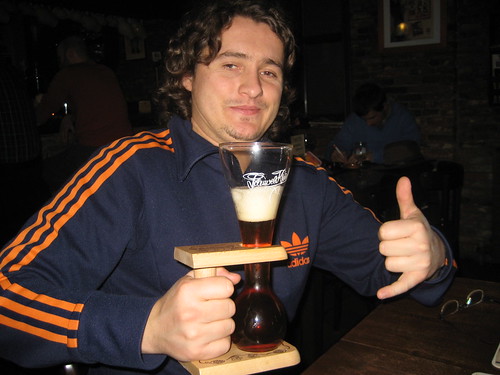 As the name of this post suggests, I seriously was too drunk to remember the name of every beer that I drank: but I do remember that in the first pub for the night, we at least drank a Westmalle, a Kwak and a Flodder each (apparently, new brews are being invented regularly in Belgium to this day, and Flodder is one that's only been around for a few years). It was in the second and final pub of the night that the beers continued, and that things started to get a bit messy. In the second pub, we had a few glasses of Duvel, which is one of Belgium's larger and more popular brands of beer. But it was the Hoegaardens that we really got into: Hoegaarden is among the largest Belgian brand of what they call "wheat beer" or "blonde beer" (due to its having a strong, almost gingery taste); and it's not only the best beer I've tried here in Belgium, but also easily the nicest-tasting beer I've encountered anywhere in the world. I have no idea just how many Hoegaardens we downed: but I assure you, it was Way Too Many™. 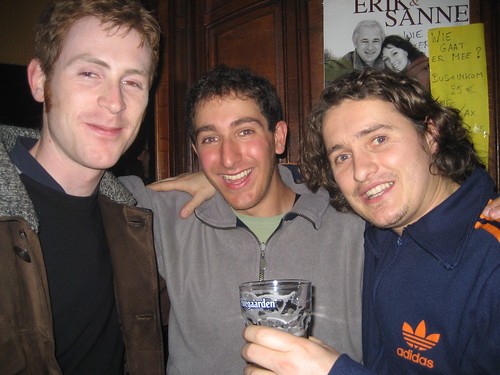 At pub no. 2: Stef’s friend, myself and Stef (left to right), and the ubiquitous Hoegaarden in the middle.

The first bar was a quiet, formal sit-down affair, with a small stool counter and with numerous cosy little tables. In contrast, the second bar was more like a mini-club: it was absolutely packed with patrons; apart from the stools at the bar and a few token sit-down tables, it was standing-room only; and the music was pumping through the very veins of the venue. Stef ran into numerous friends at this place, including some mates from his home-town hamlet further north. All up, it was a fun and very sociable affair. And since it turned out to be quite a big group of us here, everyone just kept buying everyone else beers (generally of the Hoegaarden variety), and we just kept on drinking 'em.

I was already well beyond hammered when we encountered the four blonde girls. I can't remember exactly what happened: but I do remember that whatever it was, it was Stef's idea. I wouldn't believe it had happened, had Stef not gotten hold of my camera and photographed the best bits of it, as later proof and testament of the night's craziness. But the fact was: I did score a pretty good kiss from one of these dashing local ladies! 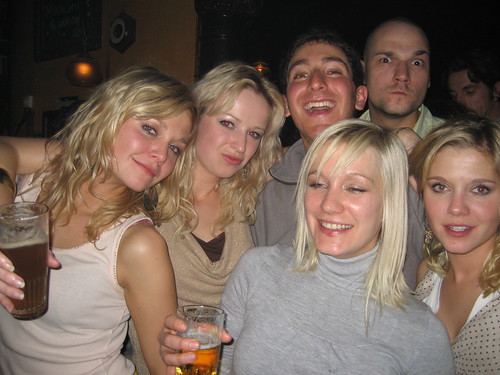 Four blonde Belgian girls: so it wasn’t just a dream! 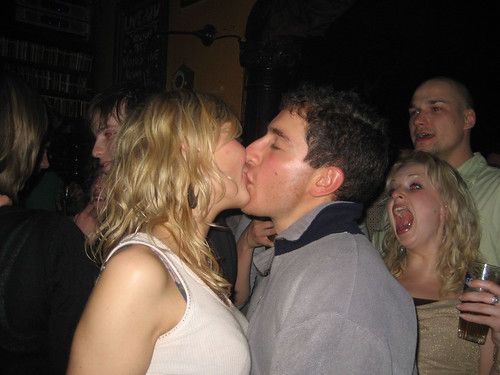 I don’t believe it either: but Stef took a photo, so it must have happened… right? :P

Anyway, let me just make it clear that: (a) it wasn't my idea; (b) it was totally random; and (c) nothing more than a kiss occurred. The girls were actually all there with their boyfriends, so there was no chance of anything eventuating with any of them. I was pretty hammered, but I wasn't so hammered that I didn't realise this — which is why I was extremely reluctant to even approach them at all. But Stef thought it would be a great laugh; and when Stef proposed the idea to them himself, the girls (to my surprise) were quite enthusiastic about performing a few innocent stunts for the camera. So in summary: we had a bit of quick fun for the paparazzi; but not as much happened as the photos insinuate. And my memory of it really is quite hazy: were it not for the photos, I'd swear on my late dog's grave that it was just a dream.

But here in Belgium (and, in many regions, also in Germany), I've discovered for the first time that beer can actually taste good. The trick is simply to get it from the best beer-making area in the world, and that area is right here. I don't know whether it's a good thing or a bad thing: but for the first time in my life, I'm actually finding the beer-drinking experience to be quite a pleasant one. I'll never enjoy American beer. I'll never enjoy Latin beer. And I sure as hell won't ever enjoy that putrid crap that we in Australia call "beer". But Belgian beer... now, that's a different story.