Kitzbühel skiing: up on the horn

Things were a little messy this morning, after last night's big crawl. I woke up rather hung-over, to find that (after 3 privileged nights) I'm now sharing my room with 4 new people (2 Aussie couples from Melbourne), who informed me upon arising that I was snoring my head off all night (hey, they should kiss my a$$ — I could have done worse). Plus, I went downstairs, to find my beanie randomly hanging on a hook in the kitchen (WTF?). Anyway, a good Snowbunnys breakfast cured me a bit, as well as giving me my voice back (must have been all the passive smoking at Flannigans that robbed me of it — gawdammit Austria, could you please enter the 21st century and pass some anti-smoking laws!). And heading up to the Kitzbühelerhorn, for another day of skiing, was more than enough to complete the curing process.

"The Horn" — as the Kitzbühelerhorn mountain is known — is the original part of the now-extensive Kitzbühel ski resort, and is still one of the resort's best areas. I hadn't visited the Horn until today, mainly because it's so far away: it's completely separate from the rest of the resort, and you have to walk to the other side of town, and then ride up the long Hornbahn gondola, in order to reach it. I got a bit lost while walking to the Hornbahn this morning, and I ended up taking the "scenic route" to reach it. Instead of cutting east straight through the town, I foolishly walked to the southern corner of the town, and then walked all the way around on the highway (yes, on the highway — there was no footpath), following the train line, until I reached the level crossing that leads to the Horn. Perhaps if I'd been a bit less hung-over, my geography skills would have been just a tad sharper.

Eventually, I made it to the bottom of the Hornbahn, and I caught the gondola up the mountain. The gondola has a halfway station: and, not realising that I wasn't yet at the top, I alighted at this stop by accident. However, the accident turned out to be fortuitous: from the halfway station, I caught the other "special" cable-car (the Horn Gipfelbahn), which only has a single car that runs every 15 minutes (I jumped on 30 seconds before it left), and which (unlike the upper half of the Hornbahn) takes you all the way to the top of the Horn. 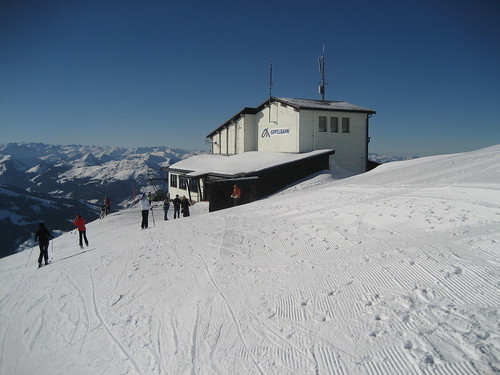 Top of the Horn Gipfelbahn: top of the world.

I then spent the rest of the day up on the horn, trying out all the runs that it has to offer (it's not that big — but it's big enough), and taking it fairly easy. The horn has some fun pistes: the main run from the summit down to the chairlift area is long and wide and steep; and the less-popular Raintal run is also a blast. There are several beginner runs down near the chairlift area — accessible by T-bar — and although they're ridiculously easy, carving them up is pleasant too (and hey, you can always play "dodge the n00b" if you get bored). I found the Horn to be an excellent cure from the side-effects of last night: the chilly fresh air and the abundance of snow will wake anyone up, and fast. 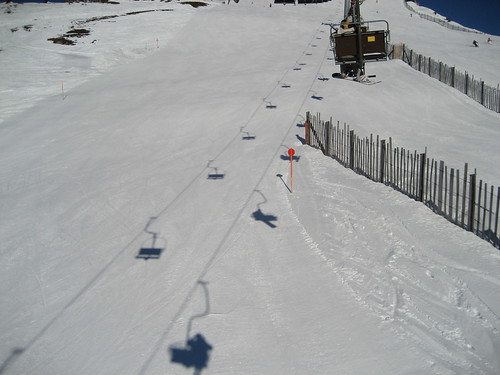 Main run down from the Horn summit. 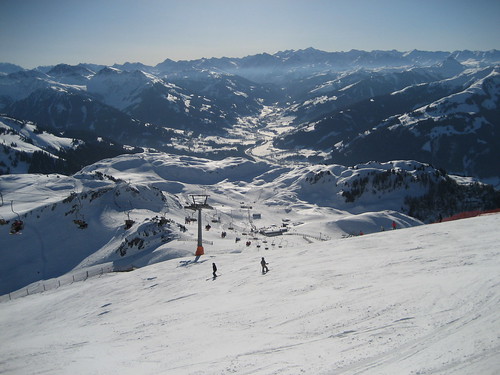 Looking down from the summit: steep and icy, but fun. 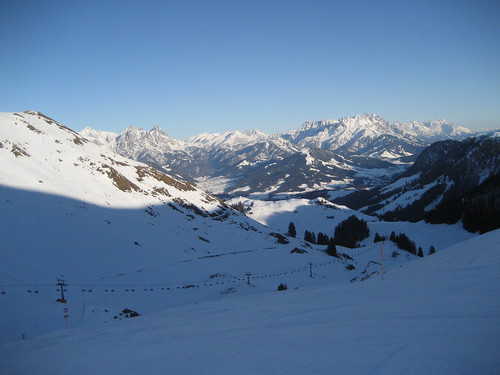 The Horn is easily the most scenic part of the resort: the panoramic views of Kitzbühel village below, and of the other mountains all around, are simply divine. Once again, we were both blessed and cursed with yet another fine and sunny day: the clear weather certainly made the scenery all the more stunning; but the condition of the snow continues to deteriorate. We were originally promised a fresh downpour of snow by Thursday — but hey, Thursday is here, and fresh snow she ain't a-fallen. 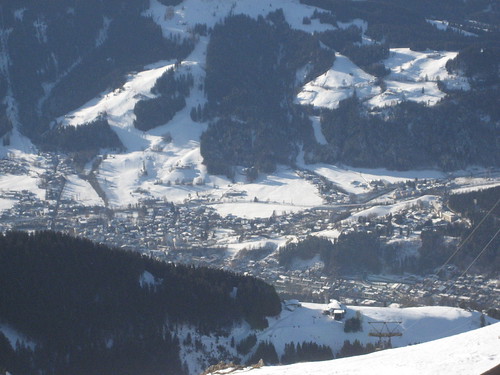 Kitzbühel village in the valley below. 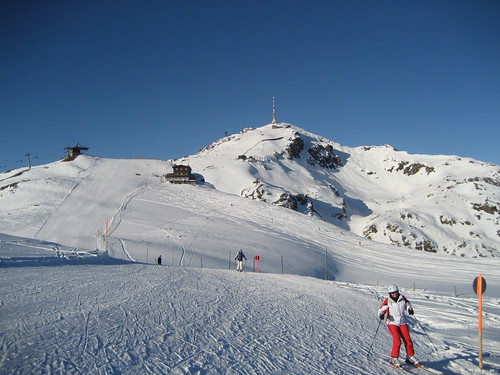 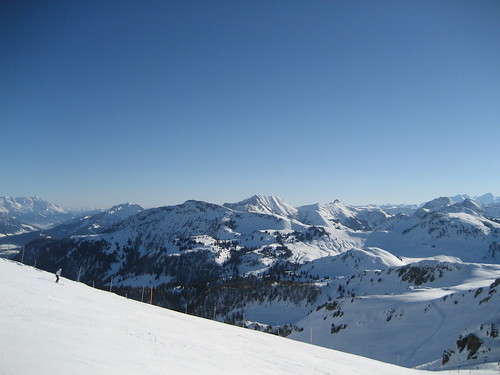 Mountains: there’s no escaping them in Austria. 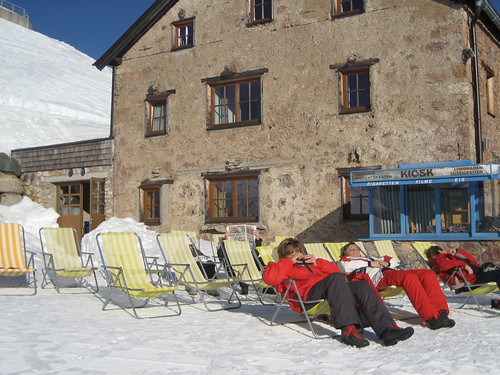 Ultimate sunbaking spot: deck chairs on the Horn summit. I tried eating lunch here, but the café staff kicked me off when they saw me (stingy pricks — they wouldn’t let me stay unless I paid €5, or ordered some food/drink).

I was meant to meet up with Jake and Mitch here today: I left before they were ready this morning, but they said they'd be up a bit later. I was on the lookout for them, but I didn't spot them while skiing (although they assured me this evening that they were around). The Horn is home to Kitzbühel's only snowboard terrain park: it's not much — just one token patch of jumps and rails on the main piste — but then again, this is quite a conservative resort, and they're not too fond of snowboarders in general. As such, most snowboarders tend to stick to the Horn — Jake and Mitch are no exception, they think it's the bee's knees. Viktor also said that he was up here today (Nikolas didn't ski today, as he injured his arm yesterday on a daring off-piste adventure), but I didn't run into him either. As we backpackers say, we were "all alone together", up there on the Horn.

I was feeling particularly lazy today: so rather than take the long and icy run down to the Hornbahn mid-station, I just hopped on the Hornbahn gondola from the top, and rode it direct, all the way down to the village. It was only 4pm by the time I reached the bottom — and yet already, it was starting to get noticeably dark. Stupid short European winter days: can't they keep their sun shining 'til 5pm year-round, like we do back in Oz? But then again, back in Oz we ain't got mountains like this.