Kill the pig, cut its throat

When we arrived at the Karen village today, *Cluck* announced to us excitedly: "tonight BBQ pig for dinner." Most of us accepted the news eagerly — almost everyone loves a good plate of roast pork — and even though I wasn't planning to eat any of it (I've had enough traife lately, thanks), I had no problem with them cooking up some pig on the campfire. But little did we realise just what was involved in "having BBQ pig" — had we comprehended the fact that out here in the jungle, you have to slaughter and butcher a pig before you eat it, perhaps we would have thought differently.

WARNING: the following blog post contains images that may disturb some readers. If you are uncomfortable with highly graphic depictions of dead or dissected animals, then please stop reading now, or disable image display in your browser.

This evening's butchering of the pig was the first time I've ever seen an animal being slaughtered and cut open, and it was one of the most gruesome sights I've ever beheld. First, they killed the pig: they did this by bashing in its head, and then by strangling it (I didn't watch this). Then, they laid the carcass down on a mat, they poured steaming-hot water over it, and they shaved all the hair off of it (the hot water helped in removing the hair). After that, they lightly roasted the carcass over the fire, in order to harden the skin to a crisp, and to make it easier to cut through. Next, they removed the carcass from the fire, and they cut the pig open by slicing its torso and stomach vertically; and they then proceeded to disembowel it, to rip its legs off, to extract its organs, and to drain the blood out of it by severing its head. Despite the whole thing being done very matter-of-factly, and despite the villagers clearly being accustomed to their work, it was still utter and revolting butchery. 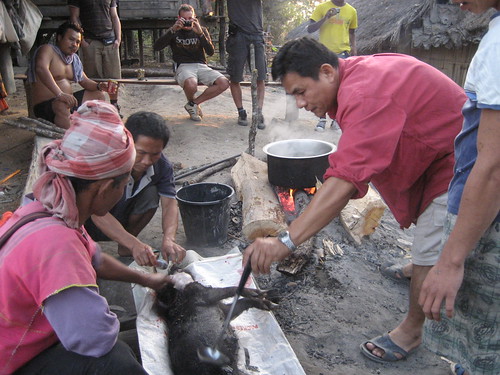 Starting to shave the carcass. 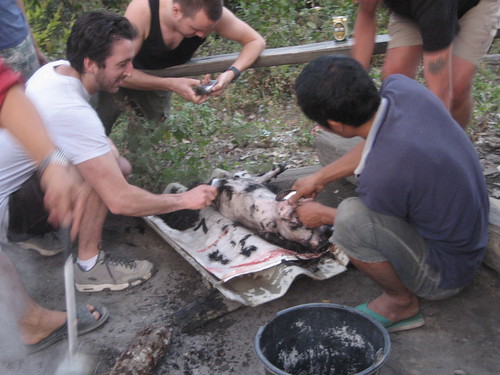 Some of the blokes helped out with the shaving. 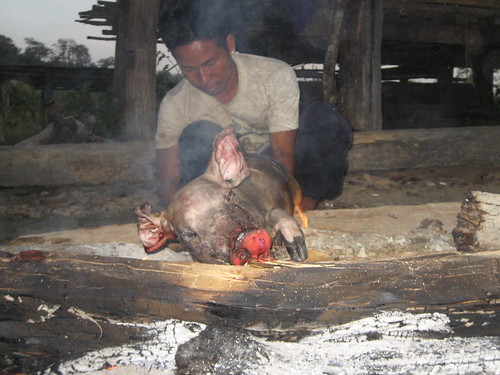 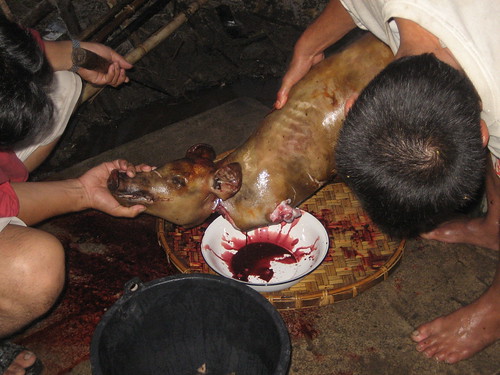 Slitting the throat and draining out the blood. 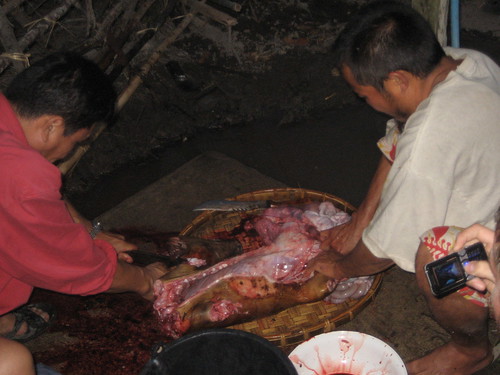 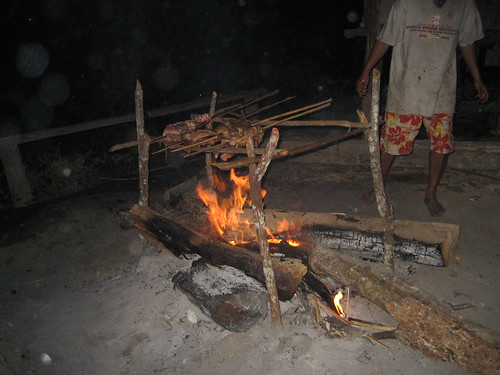 Roast pork on the campfire. I wanted to feel disgusted, but I couldn’t help but feel more hungry than horrified. I guess there’s no denying the fact that man is a carnivorous animal :P.

They charged 100B extra, for each person that wanted to share in the grand eating of the pig. They weren't stupid, either: we had to decide before they performed the butchery, whether or not we were each interested in eating it. Everyone save myself and one other person committed (and paid beforehand) to sharing in the feast. I don't eat pork at the best of times — and considering that this was definitely not the best of times, I'm very glad that I elected to go without for tonight. And it wasn't like we'd starve if we didn't eat it: there was a mountain of rice and stir-fry vegetables for dinner as well; the pork really was "just an extra", and quite an expensive one at that.

I'm really surprised at how much pork they eat, here in Thailand. Considering that the vast majority of the population is Buddhist, you'd think they'd all be vegetarian; but apparently, the age-old rise of Buddhism here failed to eradicate the older-still love of meat that the locals cherish. What's more, they're also surrounded on several sides by predominantly Muslim countries — and like us Jews, Muslims don't eat pig either — but this too has failed to affect the preferred diet in Thailand. Instead, they look to their neighbour further north — China — for their dietary inspiration, rather than looking to their own religion or to that of their immediate neighbours.

The pig slaughtering was a crazy event, and the night remained crazy after it had finished. We had several blind-drunk villagers come and sit down with us, and insist that we try some of their super-strong "rice whisky" — that stuff may smell mild, but I can personally vouch for its potent strength. We relaxed by the fire for a while, where we were subjected to some "traditional" singing from the village children, followed by the inevitable plea for tips (I haven't heard this since I was in the Andes, and I haven't missed it one little bit). As always with kids' singing, they were bored stiff and completely lacking soul when they "performed" for us; and they were forced to hand all their tip money over to their parents (who probably went and bought more whisky with it). Later on, I believe that some people in the group went and smoked opium in one of the villager's huts: as for me, my shot of rice whisky was more than enough crazy substance abuse for one night; I crashed into my bed before I could get in any more trouble. 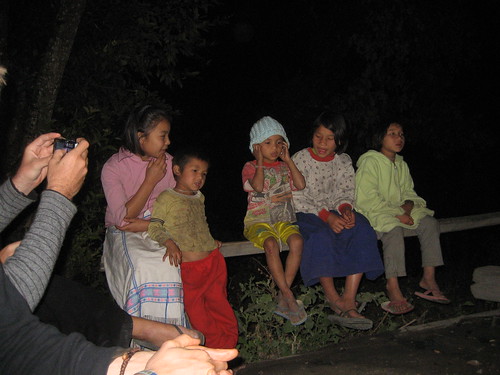 Singing by the fire.