This afternoon, I visited one of Europe's most renowned Jewish museums: the "Joods Historisch Museum" of Amsterdam. Amsterdam was home to one of the longest-thriving and best-treated Jewish communities in Europe, for at least 500 years; like everywhere else in Europe, though, it was all but decimated by the Nazis, during the Second World War. The museum is located inside what was once the long-time Jewish quarter of the city — it's built on the site of the old Great Synagogue, the restored version of which is part of the present-day complex — and it gives an extremely well-presented overview of the history of Amsterdam's Jews, from medieval times through to the present.

I didn't reach the museum until 4pm this afternoon: this was unfortunate, as it's only open until 5pm, and as there's significantly more an an hour's worth of exhibits inside. I was greeted by some rather rude local staff, who herded me through a formidable security gate at the entrance, insisted on me putting all my belongings into a locker, and herded me briskly into the first exhibition hall. Not sure if this was just my introduction to the infamous "Dutch rudeness", or what.

The first room of the museum is for special exhibits, and the current special exhibit is a collection of portrait artwork by Jewish Russian painters, who worked during the early Soviet era. The exhibit was nice, but not terribly interesting: the paintings themselves were faily average; and the information wasn't what I'd call riveting, unless perhaps you're a huge buff of Jewish Soviet history (or a serious buff of art history). 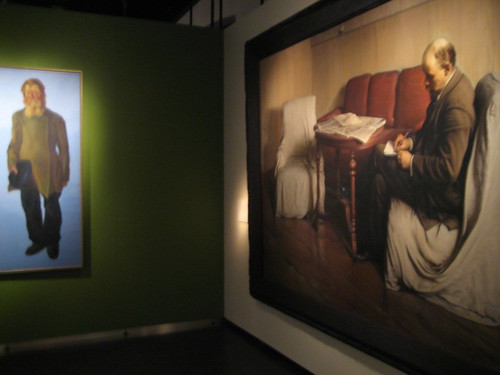 Painting of Lenin done by a Jewish Soviet.

The room that is the Great Synagogue of Amsterdam is an impressive work of restoration, and also serves to house the "Jewish life" permanent exhibit. The Great Synagogue was clearly once a very beautiful building: and although it was ransacked and badly burnt during the War, the restored central hall gives a good impression of what it must once have been like. The "Jewish life" exhibit is very detailed and well-done, but only really of interest to non-Jews who have little knowledge of Jewish customs and festivals. For a true-blue Yid such as meself, it's little more than a boring series of Sunday school revision lessons. 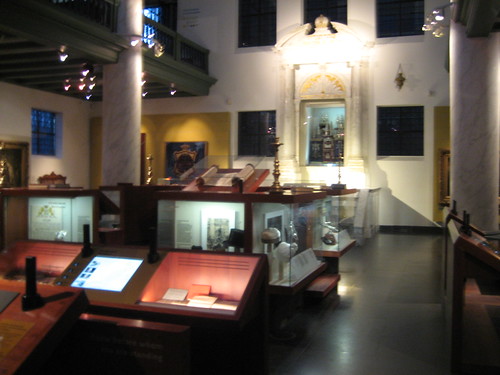 Great Synagogue of Amsterdam: now part of the modern museum.

The best part of the museum is upstairs from the synagogue, where they have two comprehensive permanent exhibits on the history of Amsterdam's Jewry: one covering the 1400s-1900s period; and a second covering the devastating events of the 20th century. Apparently, the first significant Jewish immigration to Amsterdam was of Sephardim fleeing the Spanish inquisition of the late 1400s: most of these were wealthy and well-educated people, and for centuries they established themselves within the elite upper-class echelon of Amsterdam society. Later immigrants were largely Ashkenazim fleeing the pogroms in eastern Europe: unlike their Sephardi brethren, they were mostly poor and ill-educated, and they came to depend heavily upon the Sephardim for economic and political support; it was also they who insulated themselves reclusively within the Jewish quarter, despite Amsterdam's government never imposing a formal ghetto on its Jews. 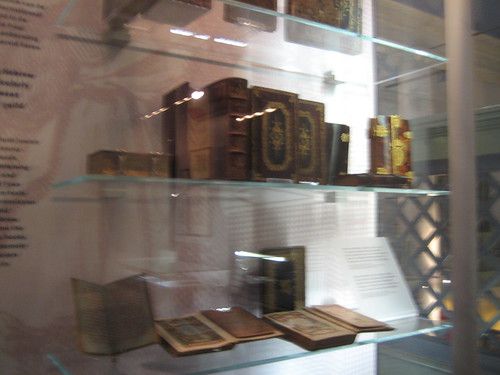 Part of the Jewish History exhibit, showing how Amsterdam was Europe’s centre of Hebrew book production (including complete Talmudim) for many centuries.

Unfortunately, I didn't get a chance to explore these exhibits in great detail: by the time I reached the 20th century exhibition hall, it was 5pm, and the rude staff punctually and mercilessly kicked me out. But what I did get a chance to see, I was very impressed with. Excellent and professionally-designed museum.

‹ Stir-fry in Amsterdam A friend in need ›
Filed in: Amsterdam • Museums • Judaism • Late