The Itaipu dam, built on the Paraná River (which forms the border between Brazil and Paraguay), is the biggest dam and the biggest hydroelectric power plant in the world. It's also one of the "seven wonders of the modern world". With 20 turbine generators, and a dam wall almost 8km long, the plant supplies a whopping 90% of Paraguay's electricity, as well as 25% of Brazil's. Thus, most ironically, Paraguay — otherwise one of the most backward s$%#-holes in South America — has virtually the greenest energy in the entire world. This afternoon, Annemie, Hendrik and I went on a tour of the dam, and we saw this monster feat of modern engineering in action. 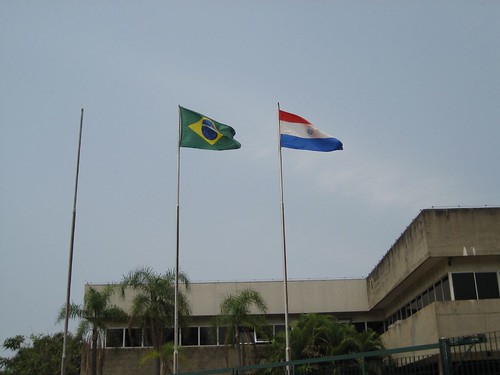 Itaipu: a binational project of Brazil and Paraguay.

The first thing that I noticed, when we arrived at the entrance to Itaipu, was the power lines. Daym, those things are massive! I've never seen so many power lines concentrated in one spot before. They fan out from the dam itself, and they march away into the depths of Brazil, all the way to the horizon. 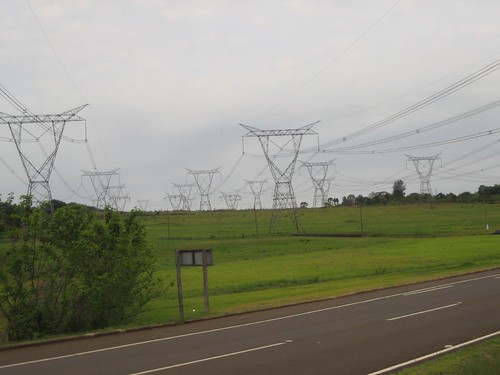 Power lines: “a reminder of man’s ability to generate electricity”.

The tour that we did is called the "special tourist circuit". With the basic tour, all they do is take you to a good lookout spot, and let you take photos of the dam and the reservoir — not very exciting or informative. However, with the STC tour, they take you right inside the power station, they show you the turbines and the control rooms, and they explain about how it all works.

Our group of about 6 people (plus our tourguide) set off, in a very nice air-conditioned minibus, to see the dam. Our first stop was a lookout in front of the dam, where we had a great view of the enormous pipes that feed the water down to the turbines, and of the Paraná River continuing on down from the wall. This was a great spot to really appreciate how big the dam is. Our tourguide (in answer to our questions) was very clear on the fact that the dam is the biggest in the world at the moment: but she did concede that yes, when it's finished, the Three Gorges Dam — which is currently being built on the Yangtze River in China — will be bigger. However, even then, China's dam will not match the power generation capacity of Itaipu. 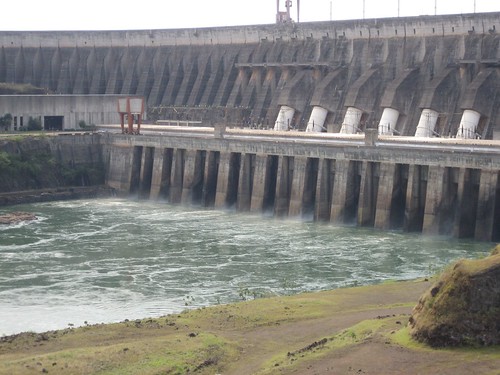 Main wall of the Itaipu dam.

Following this first panoramic lookout, we jumped back into the minibus, and drove up the road that leads onto the top of the dam wall. From here, we had a sweeping view of the entire (artificial) lake, which is held in by the dam, and which stretches virtually to the horizon. Oh yeah, and they also gave us free bottles of "Itaipu" spring water — apparently, the water comes from this very dam! 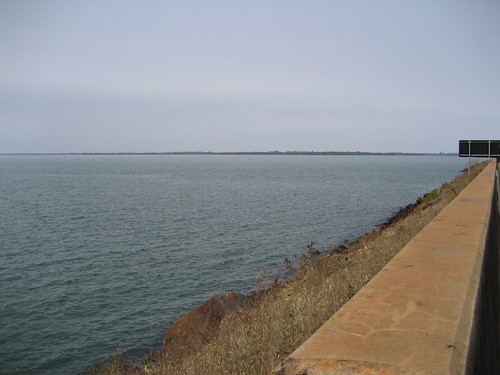 Next stop was back down to the main part of the dam, where the enormous pipes (feeding the turbines) loomed over us, and where the entrance to the power station (inside the wall) beckoned. At this point, they also made us all put on some funky hard-hats: I think they were more of a fashion accessory than a safety precaution (ostensibly, we needed them because we were in an "industrial work area"); but none of us minded wearing them, anyway. 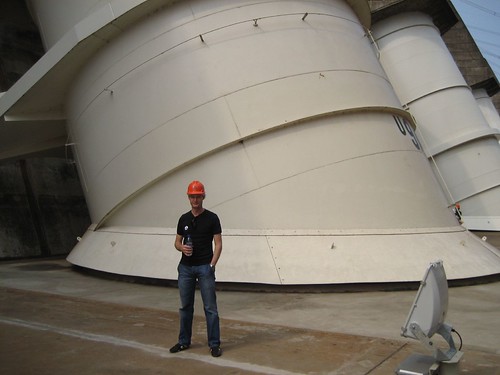 One of the guys in our group, standing next to a pipe.

From here was where all the real fun began. We started our tour of the inside of the power station itself! Mainly, the tour involved being told a lot of statistics — that would only really mean anything to an engineer — and being shown a lot of very big and powerful equipment. The architecture of the dam itself was also quite impressive. Anyway, I don't want to bore you with a big list of numbers, or to repeat information that's widely available on hundreds of other web sites — so here's some more photos :P. 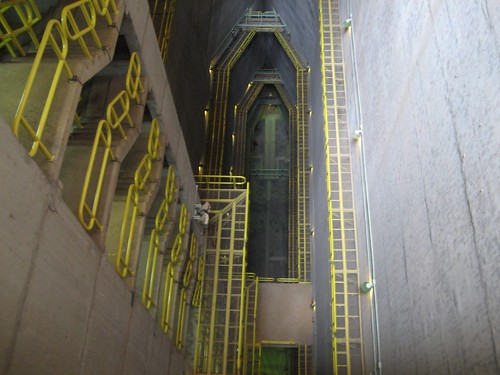 It’s a looong way down, to the bottom of the inner dam wall. 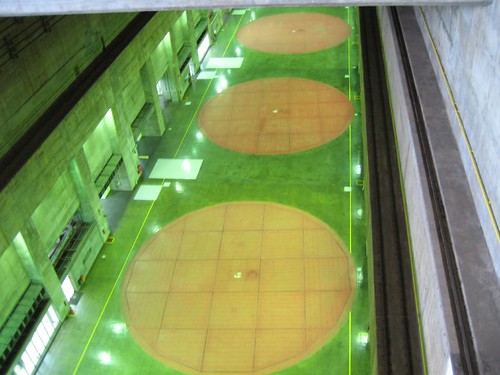 The big round floor covers for each of the 20 turbines in the station. 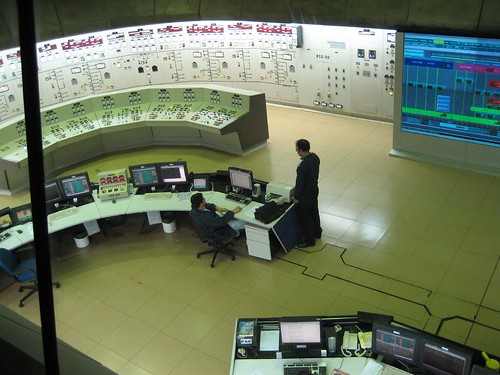 It's also a laugh, just because of the classic "control room" look of the place. When I saw it, I just couldn't help raising a pinkie to the corner of my lips, and saying: "gentlemen, welcome to my underground lair... bwahahahaha". I also couldn't help but think that the people working here have the classic "Homer Simpson job", sitting in front of a massive set of panels, an enormous amount of power and responsibility within reach of their greasy hands, feet up on top of the buttons, munching down donuts. Heeheeheeheehee... D'oh! 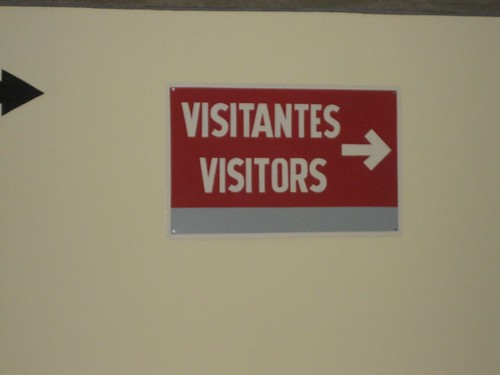 Big red sign telling visitors to go THIS WAY. Hmmm… I wonder what happens if you don’t do what big bad Itaipu Corporation tells you to do, and you go THAT WAY instead? I didn’t dare to find out :P. 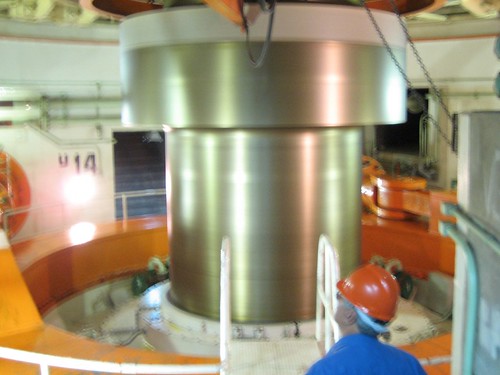 The highlight of the trip: going right down to the bottom level, and seeing one of the turbines spinning. Check out the video. 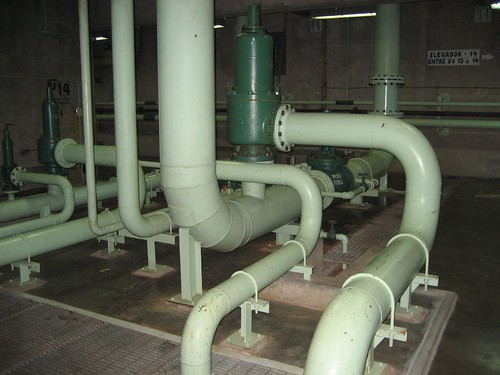 Don’t know what all these pipes are for, but they look very important. 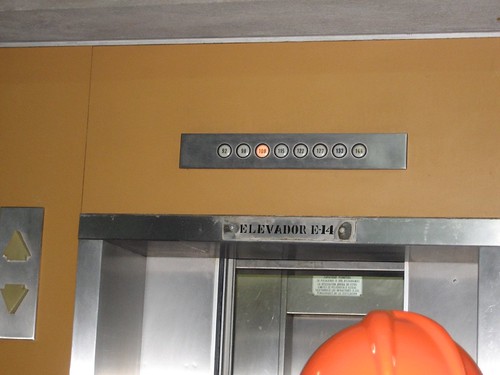 Useless trivia fact #347: the floor numbers in the Itaipu dam are not in consecutive order — instead, the number of each floor indicates its height above sea level.

After seeing the dam inside and out, and the turbines from top to bottom, that was about it for our guided tour of Itaipu. We continued by going back to the main tourist centre, and watching the promotional video about the dam, which was produced by Itaipu Corporation. As I'd been warned, this video was indeed such ridiculously blatant super-propaganda, it was a struggle not to crack up at its lameness. "Itaipu: beauty, innovation, harmony". Err... is this a promotion for a POWER PLANT, guys, or an advertisement to make me take up YOGA CLASSES? Please — c'mon! The video consisted of lots of very pretty, very carefully faded-in-and-out shots of the dam (and a few shots of very pretty women, too — which was fine with me), and virtually no information about the engineering behind the dam, about criticisms of the dam, or about the environmental impacts of the dam (of which, according to the video, there are none).

We also had a quick look inside the "eco-museum", which turned out to be great, for those people who hadn't gotten enough propaganda from watching the promo video. The museums displays were incredibly light on details, and incredibly positive about the fact that no species have become endangered from building the dam, that Lake Itaipu is "a recreational and marine wildlife paradise", and that the impact on nearby communities has been "minimal". Ahh... yes, and all of that would be utter BULLSHIT, of course!

Anyway, apart from the brainwashing at the end, the tour of the Itaipu dam was quite impressive, as well as quite informative. Once we were done there, it was only three bus rides on the local urban system (with one of these buses going round the back streets of suburban Foz for about an hour, before eventually deciding to actually take us into town), to get back to the hostel, for dinner and a few light drinks at the bar.