Into the Cañon del Colca

This morning, we began our three-day hike into the Colca Canyon (Cañon del Colca). Our group of six — myself, Chris, Sarah, Dan, Jean-Claude, and Marie, plus our guide Roy — left Arequipa in the wee hours of the morning by bus; and then it was downhill, all the way to lunch.

Tour groups to the canyon usually leave Arequipa at about 6am. However, due to the current problems in Arequipa, the only bus that we were able to get this morning, was the one that left at 1:30am! Which meant that we were up at 12:30am (was it even worth going to bed, I wonder?), and that we got picked up by a taxi at 1am. Had we left any later, the protesters would have already begun blockading the roads out of the city, and we would have been stuck. Which was why this morning, there were no buses leaving later, anyway; so we really had no choice.

Hence, we stumbled onto the bus at the insane hour of 1:30am; and most of us slept all the way (I, for one, did a pretty good job of that), until we arrived in the village of Cabanaconde, at 6:30am. Cabanaconde is on the northern edge of the canyon, and it's both the starting and the finishing point for most people who hike into the canyon itself. Nice little place: typical mountain village, with plenty of local women out selling their wares (even very early in the morning), and with kids and animals running around everywhere. Reminded me of the village of Mollepata, near Cusco, where I started the Salkantay hike back in April. 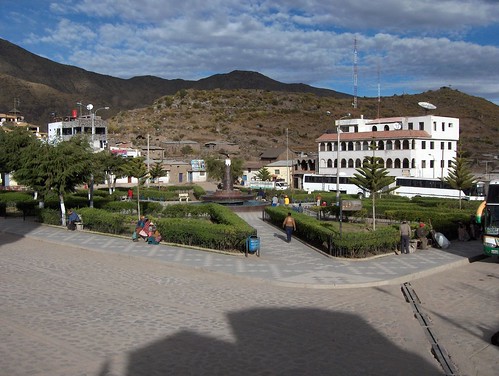 Normally, groups arrive in Cabanaconde at about midday, and then have some lunch, before starting the four-hour hike to the bottom of the canyon. However, for our special group on a special day, we started with a spot of breakfast in the village, and then began the hike down at about 9am. Even before we reached the canyon itself — there was a bit of walking to get to its edge — we were treated to some spectacular scenery of the countryside around here. Amazing mountains, amazing farmland, and amazingly clear blue skies. 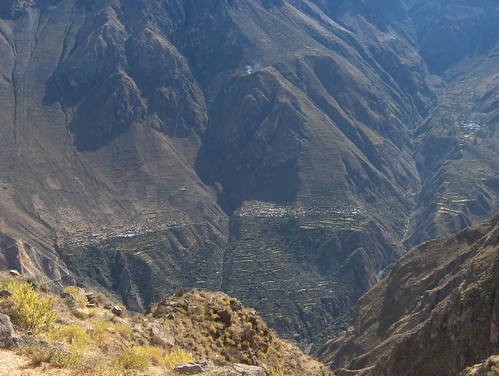 View down into the canyon from the top.

This morning's hike was not too demanding, and really quite pleasant. We followed a winding mountain path (one of Peru's several million) down through the cliffs that make up the northern wall of the canyon. The path itself was dry and very dusty; but all around us, there was light foliage in the way of shrubs, herb bushes, and cacti. We were getting a bit sore and tired towards the end — going downhill for a long time can give you jelly legs, and in this case we were going down about 900m — but we all made it fine. 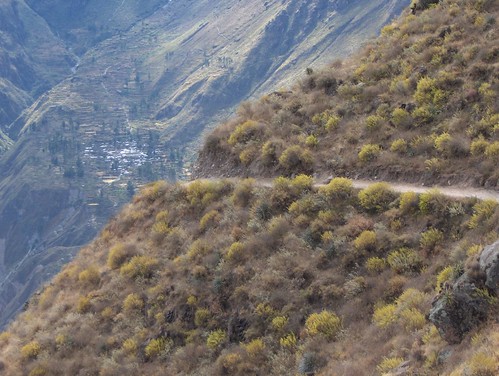 Following the winding path down. 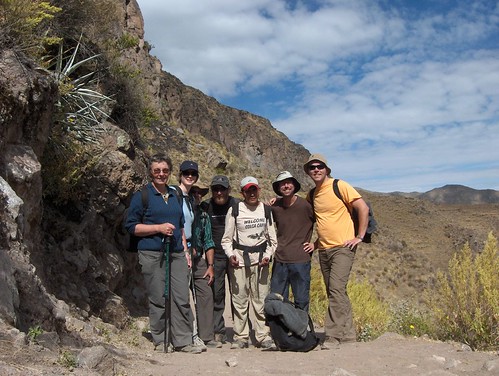 The group, on the path down. 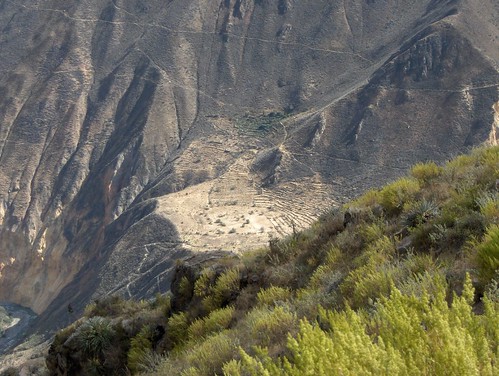 View of the southern cliffs. 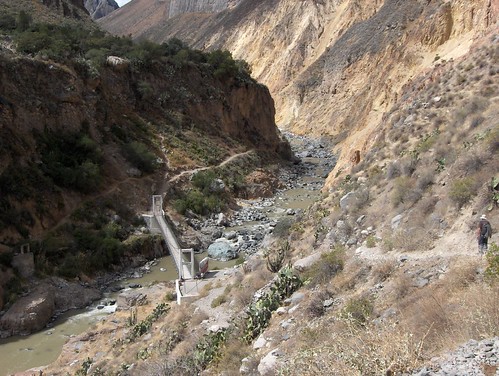 Bridge over the river at the bottom of the canyon.

When we reached the bottom of the canyon, and arrived at the bridge, we found a guy there waiting to sell us "tourist tickets" for the canyon (which we had to buy, in order to hike further in), and a few women offering fruits, drinks, and chocolates (at roughly four times what they cost at the top of the canyon, in Cabanaconde). We all bought a ticket, and we stopped for a little while to rest and to enjoy the scenery. Then we crossed the bridge, and continued for a little while more on the southern side of the canyon.

It wasn't too much further, until we reached a teeny canyon village (most people living in the canyon only speak Quechua, by the way), which had quite a few very rudimentary hospedajes (guest houses). Since it's such a big and well-established tourist attraction, the canyon villages are all filled with accommodation for the many tourists that come here: most consist of a few little huts with beds, as well as a shower or two, a toilet, and some benches to eat at. No need to bring tents or to set up camp around here: not anymore, at least (I guess you had to, once upon a time).

One of these hospedajes was our lodging for tonight. And so, at the very civilised hour of 1:30pm, we finished our hiking for the day, settled into our huts, and had some traditional Andean lunch. Then, it was sleep, card-playing, and chatting for the rest of the afternoon.