With Cath and Gaz gone today, and with Abimael working, and with my bus out to Cusco not leaving until the evening, I had one day on my own to spend here in Ayacucho. I decided to spend the day visiting the village of Quinua — a tiny place about 45 minutes from Ayacucho, reachable by regular combis — where I unexpectedly found myself horseriding through a beautiful, jungle-enshrouded cataract. 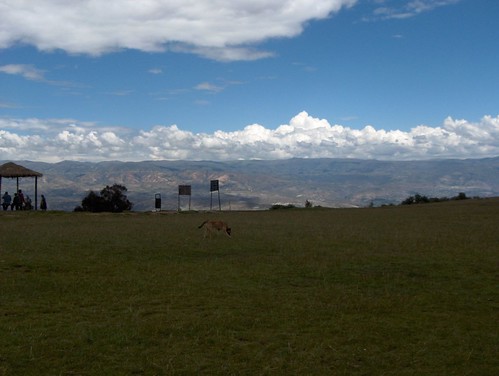 View from the top of Quinua.

Quinua itself hasn't got much to see: there isn't much there for tourists, except for a small market and some restaurants. But above the village, there's a grassy, flat hilltop, where they have a bunch of horses tethered up, ready to go into the jungly mountains that lie behind. It was lucky I found the horseriding, because otherwise I would have been pretty bored in Quinua. 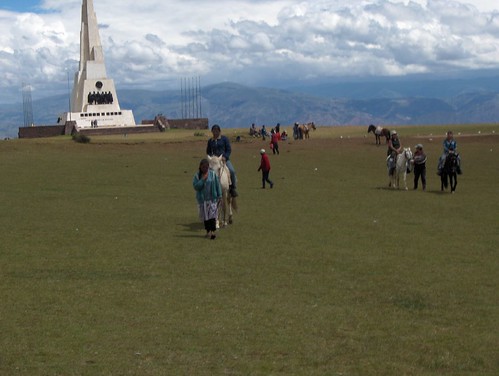 Horses on the hilltop.

I stumbled across it, because on the bus to Quinua, I was sitting next to some tourists from Lima (just visiting in their Easter break), and they said that they were going to do it. So I continued past the village with them, to the lookout area, and then I went riding with them.

I haven't done any horseriding for about 5 years, and I'd forgotten just how fun it can be. Our horses were a little bit small, but they were nimble and sure-footed, and they liked to have a bit of fun. Sometimes they randomly decided to start cantering and racing each other; and when they did that, I had to hold on pretty tight.

We rode along a narrow, winding dirt path through the light jungle, sometimes passing treacherously close to cliff edges — but the horses seemed to know what they were doing. Once we reached the end of the horse-riding path, we dismounted and tied them up to the shelter there. Then it was a short walk down to the lookout over the cataract. 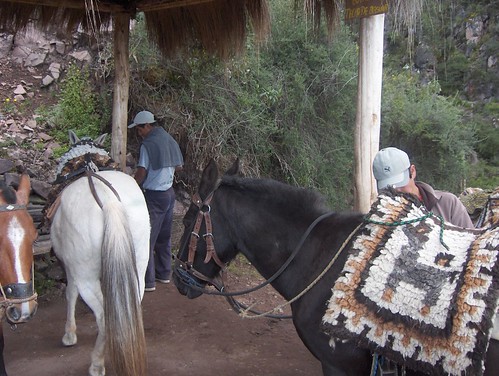 Horses at the end of the trail.

There's a beautiful waterfall that cascades down and into the cataract, and that's quite mystical with its foggy, forested, hilly surrounding. Very scenic: I guess that's why when we got there, we ran into a camera crew that was filming a video clip. 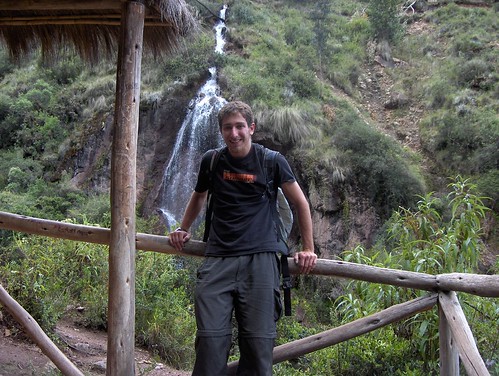 Waterfall in the cataract.

The return ride wasn't quite as fun, because it started raining about halfway back. But luckily, I had my waterproof cover over my backpack, and I was wearing fairly fast-drying clothes. And the horses didn't seem to mind the rain at all.