Went on a long horse ride through the jungle of Pilcopata today, after we were done playing with the animals, and checking out abandoned planes on the farm. Definitely the longest and the most fun horse ride that I've done on this trip, and possibly in my whole life. In the morning, we started at the farm, and rode out to a local village a bit deeper in the rain forest; and then we rode back in the afternoon, through (what eventually grew into) pouring rain. 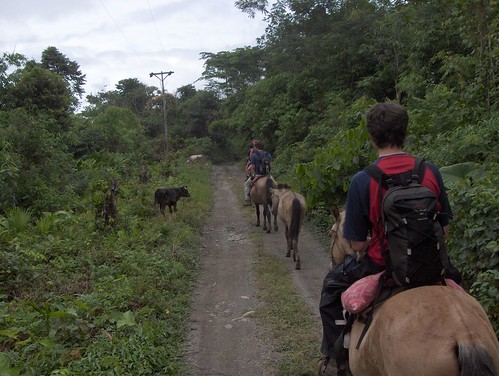 Riding through the jungle.

Our horses were all unique characters, and they all had various little amusing traits that sometimes annoyed us, and sometimes entertained us. For my horse, the trait was that he was an absolute garbage guts. The damn thing simply never stopped eating! He trotted along at a pretty fast pace, and usually managed to keep near the front of the group: but then every five minutes or so, he'd stop and have a little gorge on the foliage flanking the trail. Then, he'd have to catch up to the front of the group, by which time he was hungry again, and had to stop to eat more. Even straight after lunch, when he'd had over an hour to stand around and devour the greenery, he was still stopping for snacks at extremely regular intervals.

At one point, we passed a little field of coca plants: and my horse jumped up off the path and into the field, and started eating the coca! So not only is he a guts, he's also a coke junkie. :P

The other horses were funny or stupid in their own various ways. Wil's horse went wild and tried ramming the other horses, if any of them tried to overtake it (hence Wil ended up at the front most of the time). Stefan's horse must have had something strong for breakfast, because it dumped out quite a few massive stinkers along the way. And Chris's horse was just damn slow: it stayed at the back almost the entire time; and it was really out of breath on the few occasions that it sped up a bit. 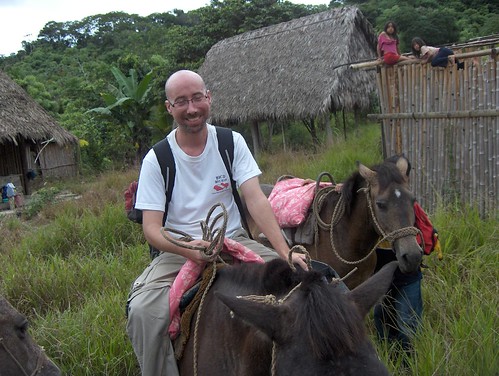 Chris on the slow horse.

When we got to the village in the jungle, we were greeted by a very friendly gaggle of little kids, who were all eager to talk with us and to play with us. Also eager for a bit of food: we gave them some cookies and some chocolate, which made their day in a big way. 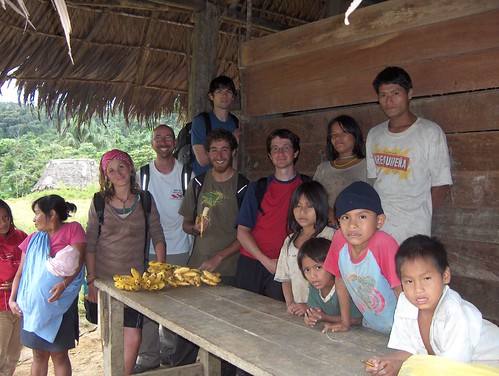 With the kids in the village.

We had some lunch at a little shelter in the forest, about a 10-minute walk from this village — looked nice and traditional, with a thatched roof and little log benches — but the working toilets were a dead giveaway that the place was built especially for tourists.

A number of non-profit groups — including the World Wildlife Fund — have been doing some great work in this village, to improve the lives of the impoverished indigenous locals living there. They've provided some sanitation and water collection systems; and they've built impressive new things, such as a beautiful stone water fountain, and even a lovely big school. 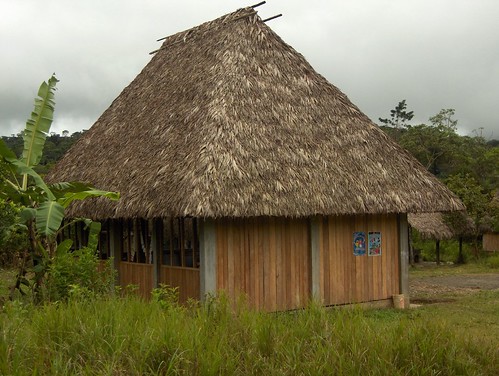 Cool new school in the village.

Our backsides were still thoroughly sore from the ride of about 2½ hours that we took to get to the village; but then, after lunch, we had to ride all the way back (to the farm that we started at). The ride back was harder, but also more fun. The hard and not-so-fun thing was that it started raining: just lightly at first, but thoroughly pouring towards the end. Some people had ponchos with them; but for me, I just got very wet (although my backpack does have a waterproof cover, which I put over it).

The really fun thing, though, was that for the last 15 minutes or so of riding, the horses were galloping at break-neck speed almost the entire way! This was absolutely terrifying — we were all holding on for dear life, as they sprinted along the dirt track, through river crossings, and over little jumps — but it was also one of the most fun and exhilirating things I've ever done. I can really see why some people love horseriding so much: when they're just trotting away, it's nothing but a sore a$$; but when they're galloping, it's an experience like no other.

Once we got back to the farm, we all sat around the fire-stove and got dry as best we could; then it was back in the taxis, and back to Pilcopata for dinner and sleep.