Perched high atop a hill, the Hohensalzburg fortress has — for well over 1,000 years — watched over the city of Salzburg below it, both visually and militarily. The Hohensalzburg is one of the highlights of the town, and at least ½ a day is required to do it justice. After our morning stroll through Salzburg, today Thierry and I embarked on the trek up the mountain, and went to see this grand edifice both inside and out.

There's a funicular car that runs up and down the mountain: but you have to pay extra to ascend in it; and anyway, taking the funicular means that you miss out on a nice (and not particularly difficult) walk. Thierry and I elected to walk: from the Salzburg cemetery, we found the path that leads up; and within about 10 minutes, we were already amongst the impressive outer walls of the fortress. Once there, we paid the entrance fee — which isn't too bad, considering how much it includes — and continued into the fortress proper. 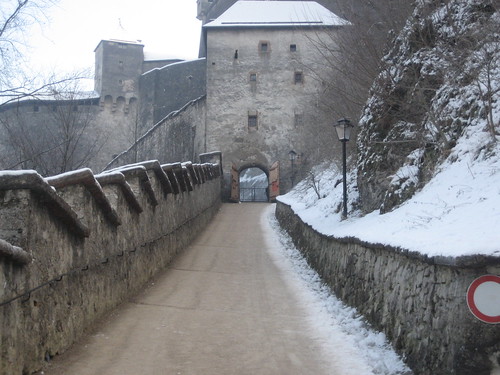 Lower ramparts of the Hohensalzburg.

The hill of the Hohensalzburg isn't that big: but the road up is fairly steep, and in some places it's only just wide enough for a car to drive through. As I ascended, I couldn't help but think what a difficult journey it must have been for all those horse-drawn cart drivers, that would have travelled this path over the centuries. And I couldn't help but feel pity for the various marauders who've attempted to attack this place from time to time — the road and the walls alone are testament to the futility of such an effort.

Thierry and I were a bit naughty once we reached the top of the fortifications: we found another funicular, which runs down the rear side of the mountain, and which doesn't seem to be used. There was a path running right up to the edge of the track, and there was also a steel maintenance stairway embedded into the track itself. Plus, there was no sign or cordon indicating that access to the funicular was closed. So we thought "what the hell": we jumped onto the track itself, and ascended the steel maintenance stairs. When we reached the top, we were greeted by an angry member of the fortress staff, who started screaming at us in German: "get out, is closed, is not allowed!" So we scurried back down, and instead reached the inner fortress the way you're meant to. Luckily, we didn't get in any trouble. 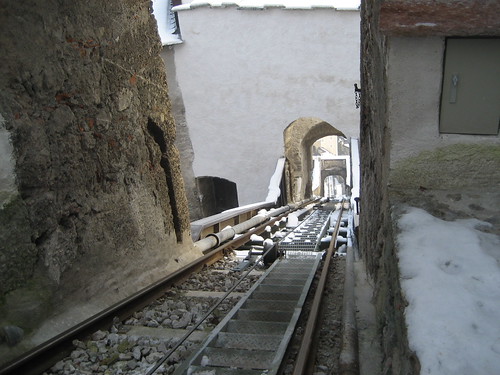 Stairs on the funicular: closed to tourists.

The inner fortress — the "keep", I guess — has a lovely central square; and the first thing we checked out once inside was the gorgeous little church in one of its corners. The church is tiny: but at various points in history, it's been able to service the entire population of Salzburg; and it really is one of the more ornate and lavish Catholic affairs I've seen around here. 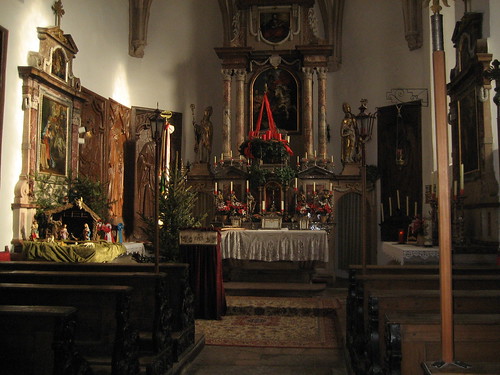 Church in the fortress.

We then went out onto the main front-facing ramparts of the fortress, from where we had a ravishing view of the entire city. We also met Wilson here — by sheer co-incidence, he'd also decided to wander up here today. The view, as well as all the snow and the frost, was pretty hard to tear ourselves away from: we spent a while soaking it all in, oblivious to the biting cold of the Austrian highlands. 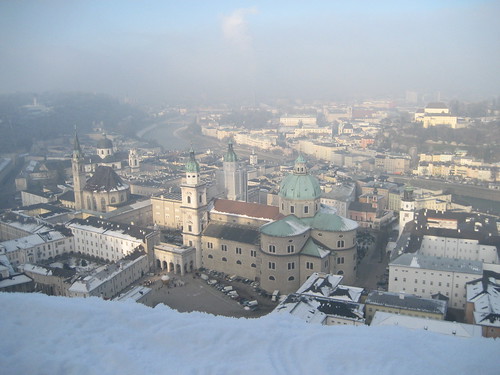 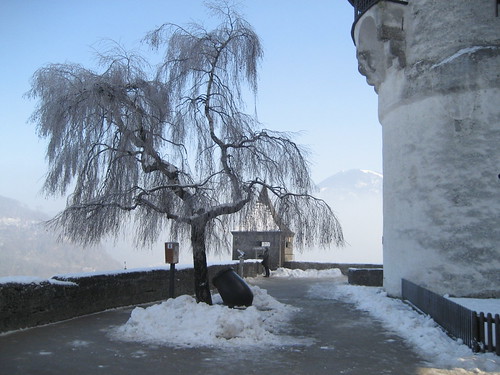 Snowy tree on the ramparts.

The lookout ramparts (complete with the usual insert-coin-to-see telescopes) do kinda steal the show; but the central fortress square itself is also charming. There's a little market in the square, which was (sadly) closed this morning — it only opens in the afternoon — but whose cosy wooden stalls still looked very nice. The cobbled ground, the spreading trees and the stalls are also all covered in snow at the moment: Thierry (being Canadian) didn't think this was such a big deal; but Wilson and I thought it looked pretty daym special. 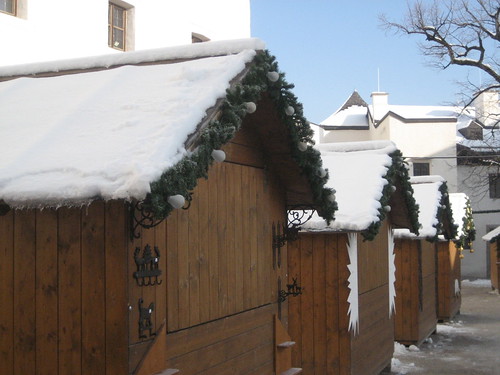 Winter wonderland in the fortress square. 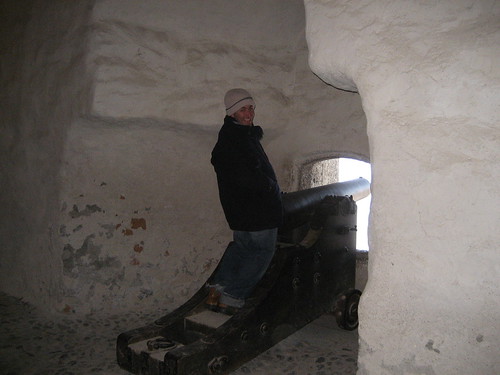 As well as giving us entrance into the fortress, the tickets that we purchased at the gate also included a free audio tour of the Hohensalzburg. I'm generally not a big fan of audio tours: but this one actually wasn't too bad. The three of us joined in on the tour, which runs every half-hour, and which also lasts about ½ an hour. Wilson was very happy that the audio was available in Chinese; not sure if Thierry listened to the commentary in English or in French.

The first thing that we saw in the tour was a series of models, representing the state of the fortress over the centuries. The Hohensalzburg was, for much of Salzburg's history, the most important structure in the city: for many years, the city was ruled by Catholic bishops; and it was they who made the fortress the seat of government, as well as subjecting it to continuous and ever-more ambitious renovation projects. The various models showed the design of the fortress from its earliest stages — as a modest little keep in the dark ages — through to the reign of the most powerful bishops between the 1400s and the 1800s, when the structure expanded exponentially. 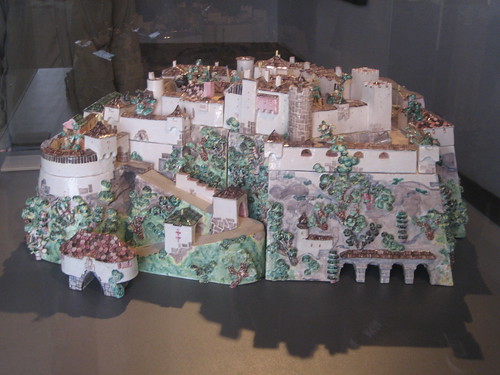 Model of the fortress.

The people of Salzburg are extremely proud of their fortress, and rightly so: it holds the impressive claim of being the only fortress (of its age or older) in Europe, that has never in all its history been successfully taken by force. It's been attacked on numerous occasions, but never to any avail. It was taken over by Napoleon in the early 1800s; but in that special case, it was surrendered without a fight. It was only ever besieged once, in 1525, when most of the population of Salzburg took refuge inside the fortress for several months, while under threat from nearby angry peasants. The people very nearly starved to death; however (as legend has it) they tricked their enemies into believing that they still had ample supplies, by thoroughly washing down the last poor bull that they possessed in the fortress (in order to make it look healthier), and by parading this bull triumphantly along the ramparts. The attackers, awed by the apparently endless food supplies of the fortress, promptly lifted the siege and retreated. A wooden statue of a black bull stands in the fortress square today, to commemorate this famous bluff that saved Salzburg.

Another interesting thing that we saw on the audio tour was the "torture room": a room filled with all manner of unpleasant devices, from hot irons and pincers, to iron-studded flails and whips, to stocks and body-crushers. Apparently, despite its name, the room was seldom actually used for purposes of torture: it was primarily little more than a holding cell for prisoners. In case the cruel instruments in the room don't conjure up enough horrible imagery in your head, they also have several illustrations on the wall, that depict in vivid detail the execution of torture methods such as hand-crushing, flailing, limb-removal and hanging.

Finally, the audio tour took us up to the lookout platform at the very top of the fortress, from where we had yet another divine view of Salzburg, as well as of the landscape leading off from the rear side of the hill. It was a bit misty at the top, so the view wasn't perfect: but it was still one heck of a panorama. Once we descended back down from the platform, and got popped into the fortress museum, that marked the conclusion of the audio tour. 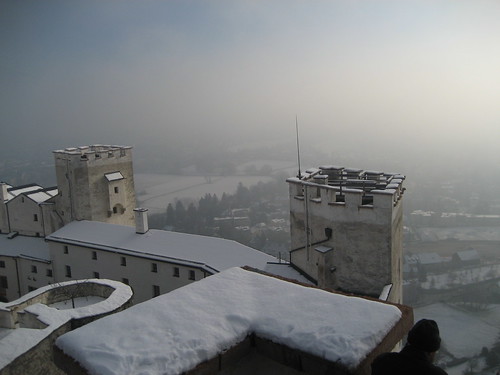 Looking down on the main fortress, and on the landscape to the rear. 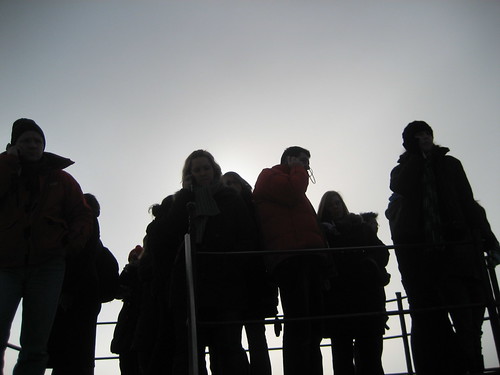 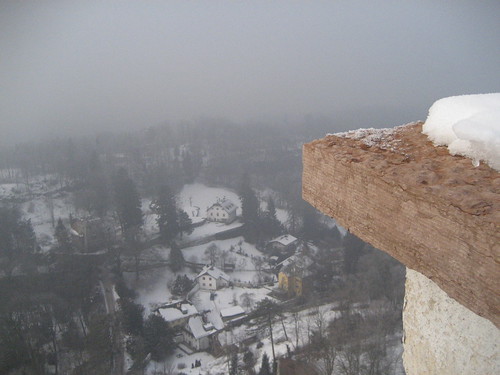 Misty view of one of the hills surrounding Salzburg.

The fortress museum is quite extensive, and has a broad variety of interesting exhibits. The exhibit of WWI relics is quite extensive: there are an abundance of regal old Austro-Hungarian uniforms, quaint old-fashioned firearms, and wooden models of foot and cavalry soldiers. It seems that Salzburg was involved in some fairly sustained fighting during WWI, particularly on the Italian front: there's a wealth of information describing the role of Salzburg in this campaign; although almost none of it's translated into English (almost all in German, with some also in Italian). 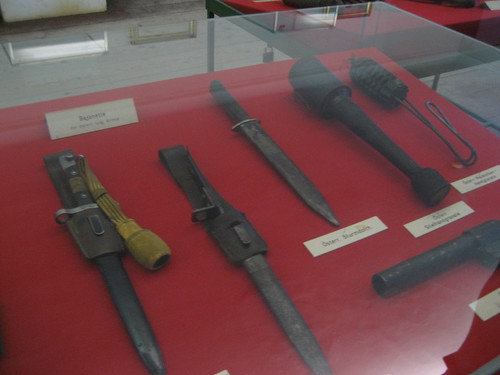 Knives and grenades used by the Austrians in WWI. 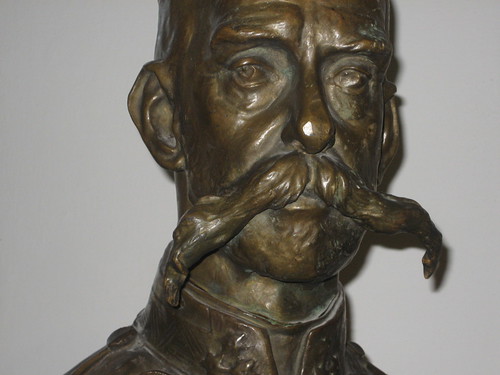 Statue of an Austrian WWI general with the most kick-a$$ “handlebars” moustache I’ve ever seen.

More relevant to the fortress, however, was the exhibit containing all the medieval relics. The collection of medieval musical instruments was particularly intriguing: they really did craft some ingenious devices in order to hit the chords, back in those days. Plus, there's one glass cabinet in which you can see a collection of some 50+ centuries-old coins, all made out of pure 24-carat gold, and only discovered (here inside the fortress) as recently as 10 years ago. The lavish king's residence — adjacent to the medieval exhibit — is also quite bedazzling. 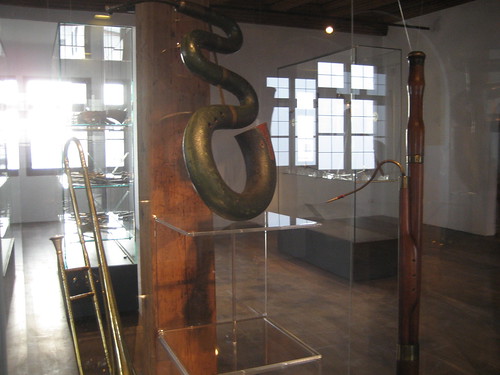 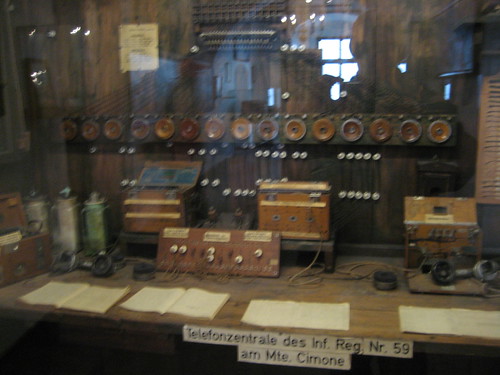 Hand-operated telephone switchboard, used around the turn of the 20th century. 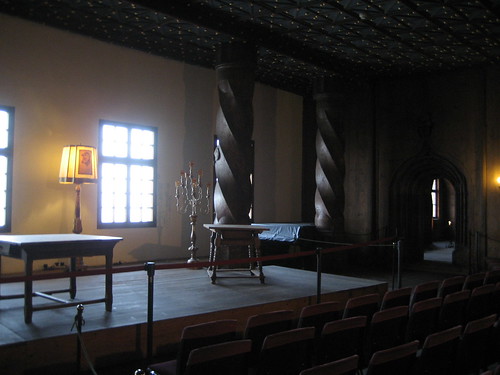 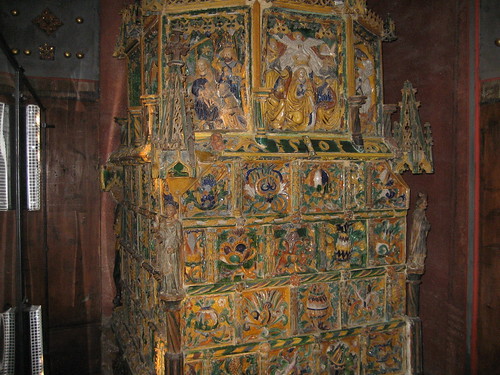 Lavishly carved and painted wooden decoration in the King’s bedroom. 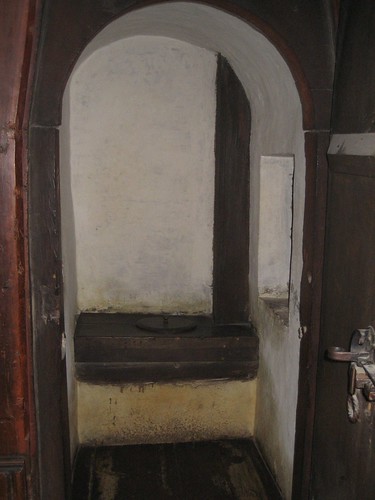 “The king’s dunny”. This is just a hole in the floor — but it would have been considered sheer luxury, back in the day. The next day, I was very amused when I saw the dunny from the exterior: it’s a little recess that sticks out a ½m from the fortress, with a sheer 50m drop below!

That pretty much covered our exploration of the Hohensalzburg fortress. Thierry, Wilson and myself made our way out of the museums, and caught the funicular back down to the town — much to our glee, our entry tickets included a free descent on it! Once back in Salzburg, we found ourselves feeling positively ravenous: so we did what any good three backpacker blokes do when hungry in Europe. We found the nearest cheap, dodgy-looking lunch venue, and we gorged ourselves on some meaty doner kebab.