When I rode into the seaside town of Milazzo — at 3pm on this Sunday afternoon — I wasn't expecting much to be open. But miraculously, a fabulous caffe and gelateria was in business, just by the docks. Naturally, I couldn't resist a big cone's worth. Italian gelato is without compare: nothing else in the world comes close. If Sicily continues to offer ice-cream like this, it's gonna be one hell of an amazing time down here.

I reached Milazzo after a very pleasant, mostly flat day's riding along the coast, headed west from Capo Peloro. Milazzo's a nice little place, although it's very quiet at this off-season time of year: the abundance of accommodation and trendy eateries indicates that it's geared for tourists; but today, I saw hardly any. The town itself is nestled in a big bay, which is formed by Capo di Milazzo (situated just north) curving around and protecting it. Most of the town is waterfront, and the extensive docks are filled with boats of all shapes and sizes. 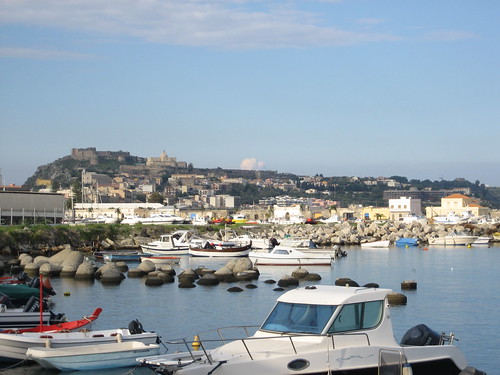 Town and docks of Milazzo. 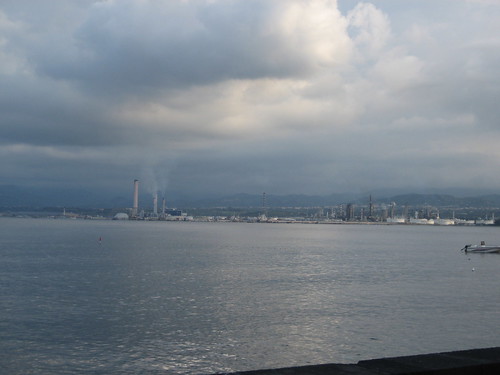 Pity that just south of the town, they decided to build a massive petrochemical processing plant right on the bay. Anyway, once you get onto the cape, it’s quite nice.

Milazzo's main draw for tourists, is that it's the gateway to the Isole Eolie, the famous volcano-based islands located north of the cape. Of these islands, Stromboli is the most popular, as it has (or should I say, it is) a spectacular, constantly-erupting volcano that's very popular to hike up. I heard that boats run regularly from Milazzo to the islands and back — and I wouldn't mind checking them out, as they're one of the famous attractions of Sicily — so this afternoon, I enquired about departures to Stromboli. Sadly, there are no more boats leaving today; and the only boat to Stromboli tomorrow morning, is one that leaves at 6am!

There don't seem to be that many boats coming back to Milazzo, either — so there'd be some waiting involved in returning to Sicily as well. So, considering the difficulties in getting a boat to them and back — and considering that my time is limited, and that I intend to spend as much of it as possible on my bike — it looks like I'll be giving the Isole Eolie a miss for this trip. Maybe I'll get to visit them another time.