Fun on the rocks

For something completely different, this afternoon I continued doing what I started this morning: more fun climbing! We were a group of four this afternoon (plus Let as our instructor): Martina, a crazy Korean guy and his wife, and myself; and instead of the "1-2-3" wall, this time we headed over to the "Diamond Cave" cliffs, up on the northern side of Railay East bay. The climbing continued to be extremely fun, and to pose few real technical challenges. It also, however, continued to be utterly exhausting — by the time we were done for the day, I was wasted. 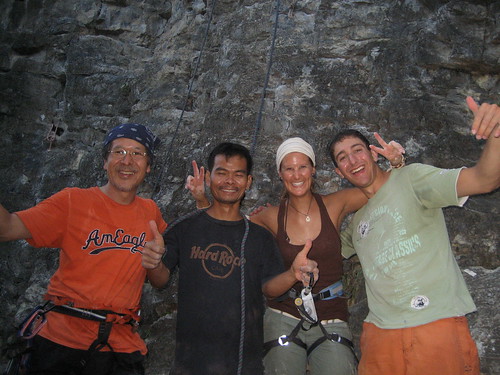 Afternoon crew: crazy Korean (his wife hurt herself earlier, and didn’t climb in this session), Let, Martina and myself (left-to-right).

Before we began the afternoon session, I enjoyed a leisurely 1-hour lunch break, where I was treated to a meal of spicy chicken and rice (on the house — lunch is included in the 3-day course). I was offered a hammock in which to nap, and I gladly accepted it: the hammock was slung up inside the mangrove swamp that covers parts of Railay East beach, and it's lovely and shady inside. I had a nearly-disastrous incident in the hammock: when my nap time was over, and I jumped out of it, my driver's license fell out of my pocket, and (unnoticed by me) made its way to the muddy, sandy floor of the beach swamp! Miraculously, disaster was averted, as the restaurant lady found the license shortly after I left, and returned it to me when I passed by again later in the afternoon — she explained that she was lucky to have found it when she did, as the license would otherwise have been washed away with the arrival of high-tide.

Like the "1-2-3" wall, "Diamond Cave" is an easy beginner wall; and as such, it too is crowded with climbers all day long. We had plenty of company; but nevertheless, we still got in plenty of climbing, and it was once again both fun and rewarding. The crazy Korean guy turned out to be a real character: he claims to have been climbing for about 35 years (although he hasn't done much in the past 10 years); and as if to prove it, he pulled out a belay device dating back to the 1970s (Let didn't even recognise it), which he still maintains in good condition, and which he actually used when climbing today. 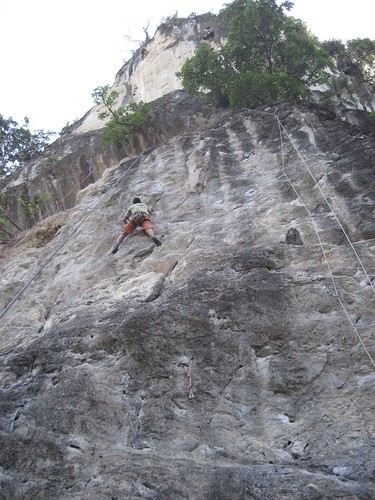 I made it up almost all the walls at "Diamond Cave". All, that is, except for one difficult and exasperating wall, that mocked and ridiculed me despite my best efforts. This wall was a piece of cake for the first half of the ascent; but the second half was seemingly insurmountable. Both myself and the crazy old Korean failed it (and the Korean guy can usually manage anything). And then Martina blew all of us (including herself) away, by amazingly getting past the tricky section of this wall, and by reaching the top victoriously! None of us knows how she did it — and she herself was stoked at her own achievement — but she did it.

Once we were thoroughly through with our afternoon at "Diamond Cave", it was time to head back to Ton Sai. And since late afternoon is the bottom-point of low tide around here, this was also my introduction to the treacherous "path" joining Railay West and Ton Sai. This path consists of scrambling over the minefield of sharp, slippery rocks that separate the two beaches at low tide (and which are largely submerged at high tide). Stupidly, I was wearing my boots today: and for this path, sandals really are the only sensible option. I managed to traverse a fair way in my shoes, without getting them wet; but eventually, too many of the rocks were flooded or submerged, and so I had to precariously carry my shoes (along with pack, ropes, etc), while walking barefoot through the unpleasant minefield. Next time, I'll come better prepared footwear-wise. Anyway, we did at least get to witness a gorgeous sunset over the water at Railay West. 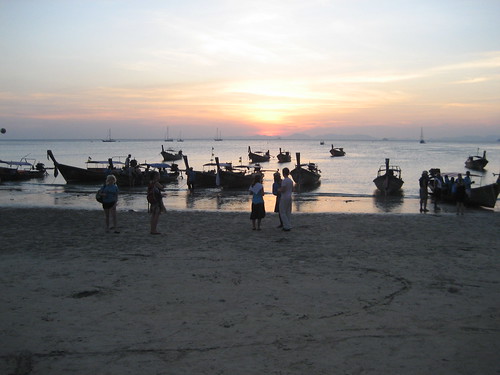 On account of my extreme buggered-ness, this evening was not a terribly big one at all. I caught up with Martina later for dinner; and in the restaurant, we ended up sitting down with a young American couple from Atlanta (not an item, just "very good friends", is what they tell people), who Martina met a few nights previously. These two are the quintessential "Ton Sai junkies": they originally planned to spend about a week here; and now, they've been here almost a month. "We live here", they explained :P. All I managed after dinner was a paltry drink or two, and then it was time to crash like it was 1929.