I've been to cities that never close down — but I haven't yet found a town (anywhere in the world) without an Irish pub. Congratulations, Ireland: us Aussies only have ourselves everywhere on the planet; you guys have taken world conquest that one step further. Flannigans just goes to show that Kitzbühel (and the Austrian Alps) is no exception. Flannigans is loud, it's smoky, and it's packed every night of the week. This evening — after our enchiladas — Jake and Mitch continued their après-ski tour of the town, by bringing the gang over here. These two Aussie brothers are incredible: they walk into Flannigans, and half the pub is rushing up to talk to them — seems that they're best mates with everyone! Flannigans has a fairly large contingent of "regulars": and if you hang around, you soon get to know most of them. This really is a very gemütliche place, after all. 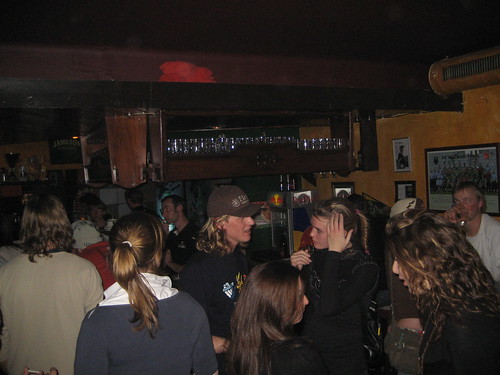 Flannigans prides itself on possessing one of only two public pool tables in all of Kitzbühel. On some nights they have (reasonably good) live bands playing; but tonight, it was just your standard selection of chirpy stereo rock music. Of the many people that I met here this evening, two in particular stand out: two very good-looking blonde sisters, who claim to be Aussies (from Wagga Wagga, no less — doesn't get more Aussie than that), but who look like the most German-complexion young lasses I've ever seen. Their accents didn't sound particularly Aussie, either — I have my doubts. 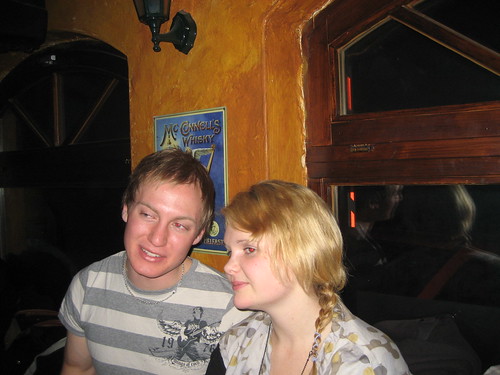 Viktor attempts to chat up the allegedly Aussie girl (don’t you agree that she looks like her name’s Helga, and like she’s a Bavarian farm girl?).

Tonight ended up being a biiig night: one of the biggest I've had so far in Europe. As far as drinking goes: first there were the free Hammerschlagen Jägers; then there were some beers over dinner; then some more Jägers at Snowbunnys; then more Jäger and more beer at Flannigans; and then we went to a club called Highways, where there was lots of dancing, and where the drinking still continued. By the time we were done at Highways, I was completely wasted; the dancing there, and the walk back home, are a little hazy in my mind. But it was all jolly good fun — Kitzbühel really does know how to après-ski.