I've never had any burning desire to jump on a motorbike. I've always thought of motorbike riding as a dangerous, punked-up, reckless activity — not really my cuppa tea. And if I ever was to ride a motorbike, I sure as hell never imagined that I'd do it for the first time here in Thailand — surely, the craziest place on Earth in which to try it without prior experience! But motorbike riding is a very popular pastime in Thailand — not to mention the cheapest and quickest way to get around — and so, due to peer pressure from my friends Marie and Claire, today I threw all my fear and common-sense to the wind, and gave it a try. It was a terrifying and nerve-racking adventure, but there's no denying that it was absolutely wicked good fun. 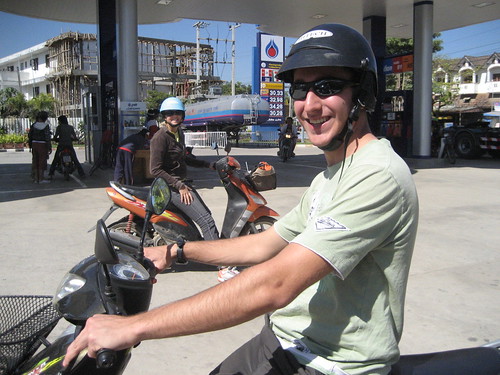 Revving up in Pai (Claire just behind me).

As far as motorbike riding in Thailand goes, I'd say that Pai is one of the better places to try it — particularly for first-timers like myself. The motorbikes here are very cheap to rent: the ones that we found were a mere 120B/day (app. US$4). Most of them are automatic "scooters" (or "mopeds"): no gear-changing or clutch-pressing required (good for me, since I never learned how drive a manual car, either) — just rev and ride. And, most importantly of all, there's very little traffic around here (light traffic in the town, and next-to-none in the surrounding countryside), and most of the roads are sealed and are reasonably smooth. 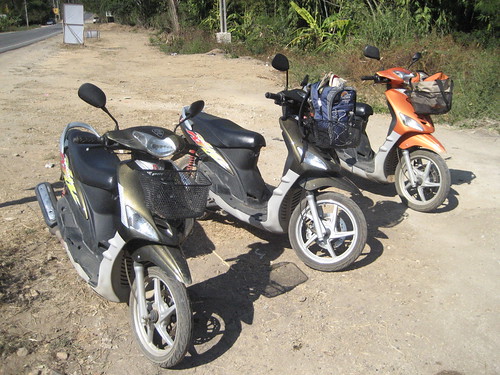 Motorbike riding is unlike anything I've ever tried before: and since I never expected I'd ever try it, I've never really tried to imagine what it would be like — so I had no prior expectations to go by. It's a bit like driving a car, and a bit like riding a bicycle: as its name and its nature suggests, it's somewhere in between; although also not quite like either. It's extremely easy to learn (especially with automatics): you just hop on, and start riding. It's far too easy, in fact: after just 30 seconds on the bike, it's tempting to be deceived into thinking that you're confident at the wheel, and that you can safely manage anything that comes your way. Which is of course completely untrue — feelings aside, the fact is that you know almost nothing when you hop on for the first time. Anyway, at least I had a helmet to keep me safe.

When we rocked up at the rental shop this morning, the lady behind the desk asked me: "you know how to ride motorbike?" I answered: "yes" — it didn't sound too convincing; and I was certain that she didn't believe me. But she didn't particularly care: I'm sure she hears the same faltering lie a hundred times every day; and anyway, she could see that I was with Marie and Claire, and that they actually did know how to ride. Plus, she took my passport as a security deposit — and if I crashed and wrecked the bike, she would simply refuse to hand back said passport until I managed to pay for the bike's repair costs. They're meant to at least ask to see your driver's license, before renting you a motorbike: but the lady at this shop didn't even do that. She just took our money, took our passports, and off we went.

After filling up on petrol, the three of us did the standard little circuit through the countryside around Pai. We began by riding down to the memorial bridge, which spans the river about 5km's south of town, and which was built in commemoration of Thailand's involvement in a war about a century ago. We decided to skip the detour ride over to the Pai Canyon, as the road there was a dirt track that looked rather dodgy. We rode over to the hot springs near Pai: but as it's a bit of a ripoff to go swimming in the baths there, we refrained from entering the place. We rode past several elephant camps, where Claire enquired as to the possibility of elephant riding with them (she hasn't yet ridden one). And finally, before returning to Pai, we stopped at a small wat (temple) that overlooks the valley, and where a friendly monk was happy for us to wander around and to explore for a while. 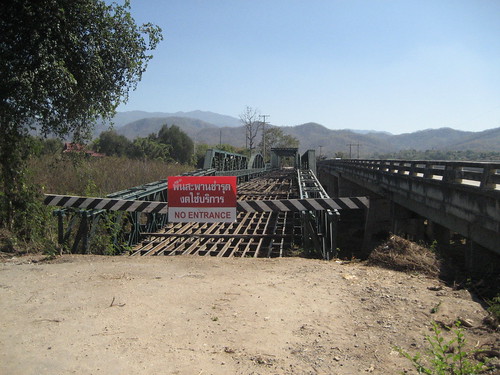 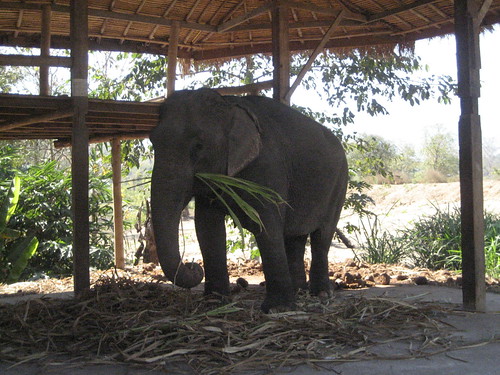 Hungry elephant on the roadside. 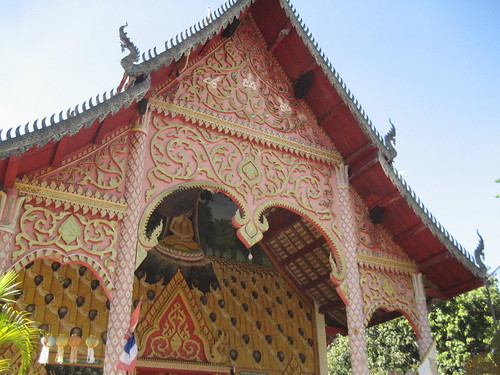