Once I finished my three-legged train journey to the southern tip of Italy today, all that was left was to catch a ferry, across the small channel that separates Sicily from the mainland. The ferry goes from Villa San Giovanni — a small coastal village in Calabria — across to Messina, one of the larger cities of Sicily. I don't know why they've never built a bridge or a tunnel over to Sicily: but anyway, the ferry is quite cool; not only do pedestrians ride on it, not only do cars and trucks drive onto it, but they even take the trains straight across on it! As for me, it was just my crazy self and my crazy bike that made the journey. 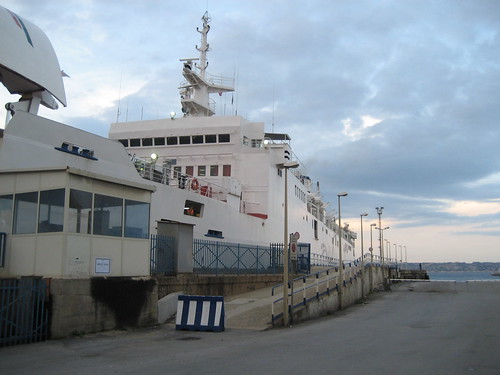 The ferry that goes from Villa San Giovanni to Messina.

Although the ferry dock is right next to the train station, we had to wait a little while, as I think we'd just missed the previous ferry to Messina. Anyway, we boarded the ferry by about 4:15pm — people walked on, cars drove on, an I think that a train got placed on as well (they connect the tracks up, very cool system) — and then we were off. Since nobody asked me to pay the fare, it was also a free ride! Maybe pedestrians go free? Not sure: but anyway, it was a lovely, scenic trip across the channel, and it afforded plenty of great first views of the island of Sicily. A little cold and windy: but nothing more than a stout sea breeze. 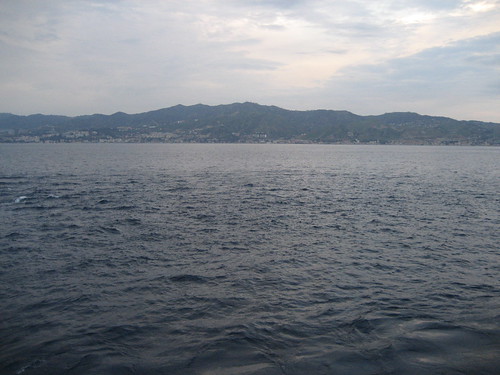 View of Italian mainland behind us.

View of Italian mainland behind us. 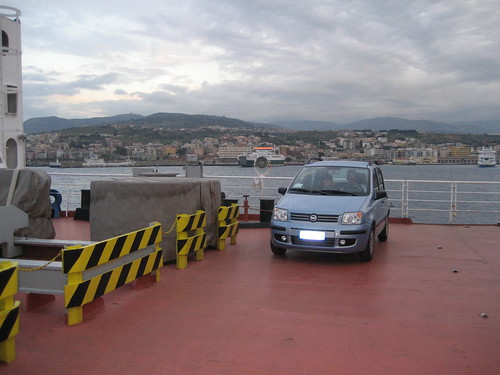 The highlight of the trip was when they turned the whole ferry around: only one end of it can do the docking; so they have to spin the whole thing 180°, halfway across the channel. Must be a lot of funny propellor action going on when they do that: the water sure churns up! Anyway, it's such a short distance over the water to Sicily, that it was over before we knew it: couldn't have been more than ½ an hour, including docking at each end, loading and unloading, everything. A short ride, but a sweet one — and a great way to land in Sicily.