So I'm walking down 2nd Ave in New York, looking for a place to eat. And what do I see, but a store that claims (in bold letters) to sell "New York's best egg cream". So what do I do? Of course, I go into the store, and I say to the (Pakistani) guy behind the counter: "give me an egg cream please". No — actually, I'm not a bald 50-year-old Jewish man, I'm an Aussie backpacker; so I say "I'll grab an egg cream thanks, mate". And I must say, it did taste pretty good. You don't have to be Jewish to understand this — but as they say, it wouldn't hoyt. :P 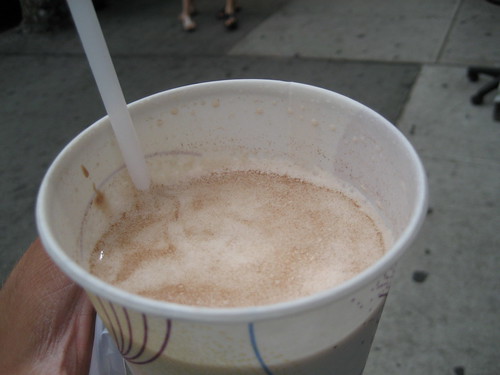 An egg cream, for those of you who've never been to the Lower East Side of New York, is a delicious sort of milkshake drink. Not very thick, and a bit fizzy (I guess they put some kind of soda substance in it) — but it has plenty of milk, and it's usually mixed in with a generous serving of chocolate. But you can get other flavours of egg cream, such as banana, if you so desire. 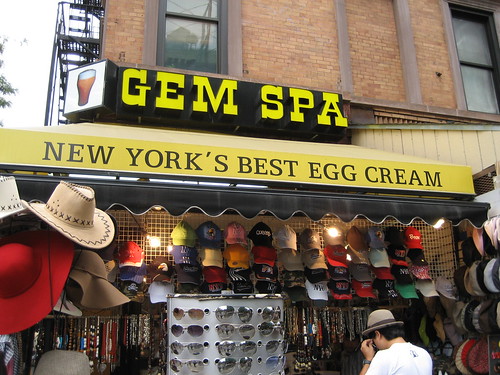 The store that makes the big claim.

I was actually walking down this part of New York not just because I was looking for "somewhere" to eat — I was looking for somewhere in particular. When I last visited New York (during my USA trip with my parents, seven years ago), we ate at the 2nd Avenue Deli — considered by many to be "New York's best kosher eatery" — and back then, I had the best matzah ball soup I've ever encountered in my life. Sadly, I was unable to find the deli, as it closed down about two years ago, and as there's now a bank where it used to be (cnr 2nd Ave and 10th St). Anyway, I managed to find myself a nice pastrami sandwich at another deli instead — as well as finding the egg cream — so despite the disappointment of the missing cannonball-sized kneidlach, I can hardly say that I missed out on "the Jewish New York eating experience".