Once I'd finished finding my way north-west out of Catania today, I continued straight up north, into the eastern foothills of the ever-looming Mt. Etna, which watches over the city of Catania and over much of the Sicilian east coast, from its lofty peak of 3,326m asl. While this morning's riding was flat and easy, the afternoon ride through the towns east of Etna was uphill virtually all the way. Nevertheless, the ascent was reasonably gradual, and it was worth it for the rewarding and diverse scenic views. The steepest uphill was actually at the edge of Catania itself; once I was past the town of Sant' Agata li Battiati, I was basically through the worst of it, and also through the extent of Greater Catania. While the immediate landscape did change throughout the afternoon — the populous mountain towns eventually gave way to farmlands, and eventually to forest — the presence of Etna to the west was constant, and the view of it just kept getting better and better. 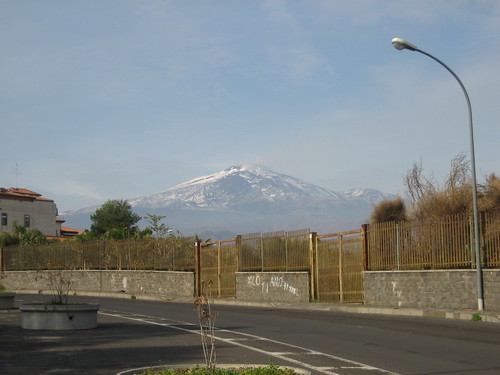 Etna at her finest: smoke rises from the top as usual, and snow can be seen on many of the upper slopes.

The towns on the eastern edge of Etna — the ones that I rode through, at least — are quite touristy: all of them sport a generous collection of B&Bs, restaurants, and tour activities. Despite this, though, they're still very quaint, and they retain plenty of character and charm. The nature of the towns also changed a fair bit, as I continued riding north, away from Catania, and into ever higher-altitude slopes. From Sant' Agata, I went on to San Giovanni, and then up to Viagrande. From Viagrande onward, the heavily-populated township area that I'd seen thus far gave way to farmland estates, smaller villages, and nature reserves. After I passed the town of Zafferana, further north still, even the farms started to fade into the background, and all that remained was untouched, pristine mountainside forest. 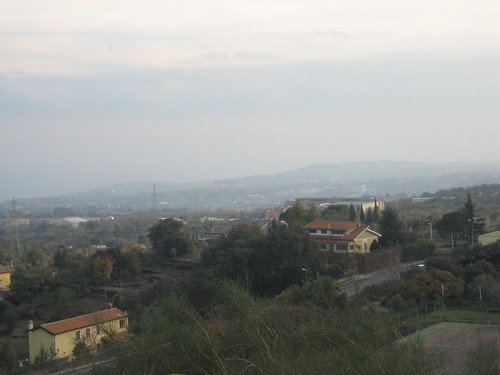 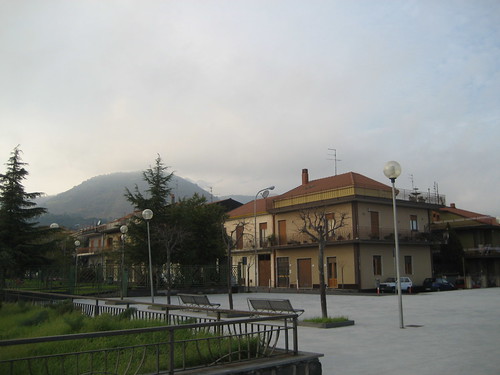 Lookout area in one of the mountain towns. 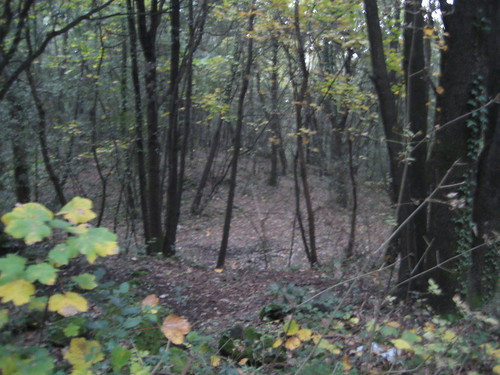