My mate Yuri was keen to do another hike today — this time to the bay of Dos Rios, about 2 hours' walk from the main Ilha Grande town of Abraão. Unlike the last hike that he organised, however, this one wasn't quite so crazy, as we were doing it during the day. Our group for today was six: Yuri; Kerry (Larissa couldn't make it — still not feeling well); Sophie; two Italian guys; and myself. It was a bit of a slow start getting out the door this morning; but once we finally set off, we had a good 'ol walk there and back — plus, we got to see an abandoned prison.

Yuri had told me last night that he wanted to do a hike today, and that it would be good if we could leave early — "by about 9:30am". Well, I was up and ready to go by this hour — but as it turned out, nobody else was! All the other participants for the day were either tired, hungover, not ready, or some combination of the above. Plus, it took us a while to work out where we were actually going, as we had several options for the day. Anyway, we all managed to drag ourselves out of the hostel by about 11:30am, and — after stopping in town for some supplies — we were on the track by midday. Slow start, but what can you do? This is, after all, a tropical island in South America — hardly the most punctual place on Earth.

As with the hike to Palmas two nights ago — and as with virtually every hike on the island, I assume — today's hike was all uphill for the first half, and all downhill for the second half. If you think logically about the geography of your average island, then it kind of makes sense that any hike taking you from one part of the shore to another is going to follow this pattern, right? Since all the edges of the island are its lowest spots, it's fairly predictable at what points you'll have to ascend, and at what points you'll have to descend. On the way up, therefore, it was reasonably hard work — but we were rewarded with some lovely views of Abraão below and behind us, along the way. 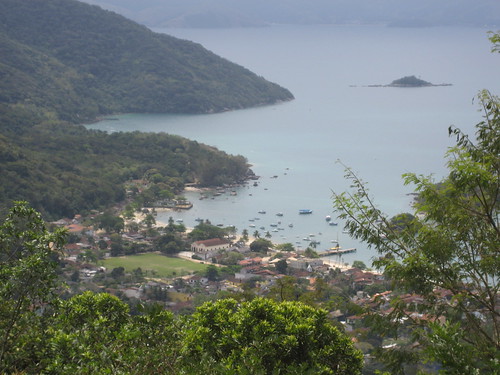 We were just slogging and panting our way along for the first (uphill) half of the journey; but for the second half, we had a bit of fun along the way. We found a little stream on the side of the path, where we had a break and a bit of a splash around. Plus, we decided to randomly race each other down a few bits, sprinting as fast as we could. 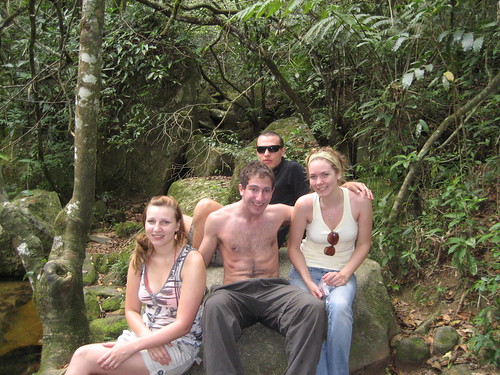 Sophie’s the chick on the right.

After about 2 hours, we made it to the bay of Dos Rios. As its name suggests, the bay does indeed have two little rivers, which wind their way down from the hills further inside the island, and which come out at the beach that lines the bay's shore. The beach here is quite nice: the water was a bit nippy today; but it's got good little bodysurfing waves, and it was blissfully quiet and serene. 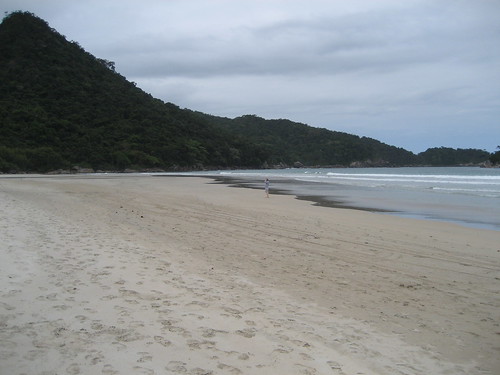 The beach at Dos Rios.

Myself and Yuri went for a swim in the beach, as well as for a little wade in the river estuaries. The Italian fellas and the girls just dropped down on the sand, and relaxed for a while — although I doubt that they got a suntan today, as it was very overcast. We also bumped into the three Argentinean chicks, with whom I went on the boat tour yesterday — they'd hiked over separately, a bit earlier than us.

By the time we were done splashing around at the beach, we were getting quite peckish — so we found a little somebody's-house-slash-restaurant joint, in the tiny bayside town, and grabbed some good Brazilian tucker there. Bit of chicken, bit of beef, bit of beans, and lots of farofa. Lucky we had Yuri with us, because the owners spoke barely a word of English, and the rest of us were up s$#% creek as far as Portuguese went.

Following lunch came the main attraction of Dos Rios, and the reason that we decided to come here in the first place: the prison. Dos Rios had a fully-functioning prison for many years, which housed a variety of Brazilian criminals — although mainly drug offenders — and which only closed down as recently as 1994. The prison is now abandoned, and largely demolished — however, the remains of it are open to the public, as a tourist site of mild interest. We explored the prison a little bit: but really, there isn't that much to see here, just a few virtually-destroyed buildings, and a big wall around a lot of overgrown boulders. As if I haven't seen enough ruins on this trip, eh? :P 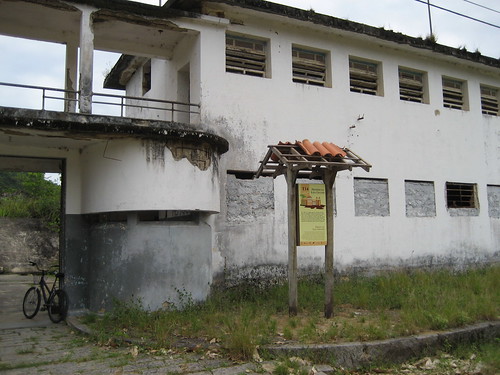 Main entrance to the prison. 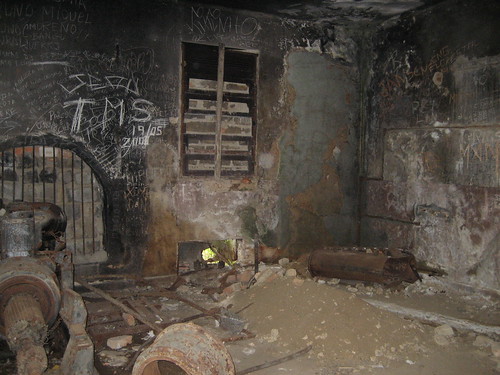 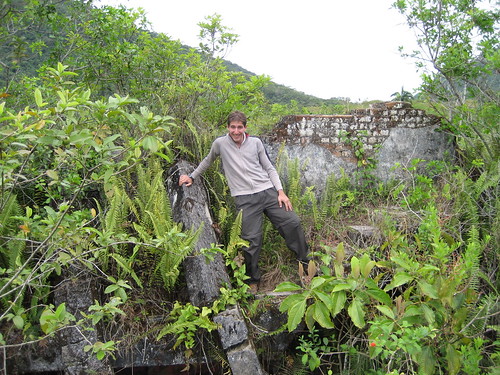 Myself amidst the overgrown prison ruins.

It didn't take that long to explore the prison, since — like I said — there's really not much left of it. So after we were done checking out the resting-in-peace Brazilian penitentiary, we made our way back. And as with the way there, it was a hard slog for the first uphill half, and a pleasant cruise for the second downhill half. It was getting a bit dark towards the end — we had to pull out a flashlight or two during the last 15 minutes — but we made it back to Abraão without problems. Good day of hiking — I wasn't expecting so much hard work, on an island retreat! — and some interesting sights at our destination.