The second day of our Doi Inthanon trek was easy-going — much like yesterday — but it did involve a fair bit more walking. From last night's campsite, we embarked on a big romp through the jungle, with a fair bit of uphill along the way. Our ascent came to a close in the afternoon, when we reached the famous Karen hill-tribe village that became our abode for this evening. 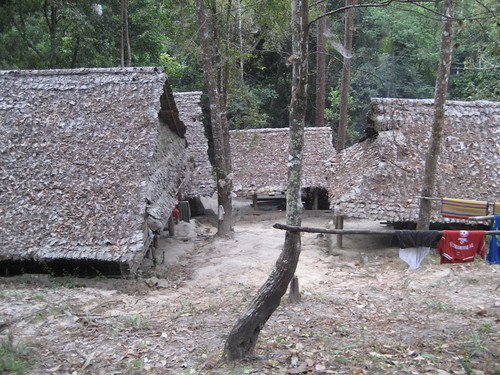 Camp by the falls: morning view.

I remarked yesterday about how I signed up (in Chiang Mai) for the 2-day Doi Inthanon trek, and about how everyone else in the group seems to be doing the 3-day trek; and about how this doesn't make any sense to me. This morning, the dilemna was solved — although not in a very pleasant way. Last night, *Cluck* told me that everyone else in the group was doing the 3-day trek, and that I'd have to stay for 3 days as well, since there was nobody to take me back. That was fine with me: I have no rush; and if everyone else is booked for 3 days, then I'd rather stay with the group than split off.

He told me that last night. But then this morning, he had fresh news for me: "you go back today, we find someone to take you back."

"But I don't want to go back by myself," I protested. "I'd rather stay with the group — and last night, you told me that that's what I have to do."

Hey, screw that: I wanted to stay 3 days, and I wanted to keep with the group, and I wasn't going to pay extra for it. I was getting quite angry at this point — the lies, the surprises and the changes of story were all getting a bit much for me. Anyway, *Cluck* resolved the situation by taking me for a walk — and although I was pi$$ed off, I couldn't help but be amused when he explained to me: "we climb to top of hill, then get mobile reception, call tour agency and talk to them." So he called the agency, and they finally agreed to let me stay for an extra day, without paying anything extra. I think they were scared that if they tried to charge me more, then I'd get really mad and report them to TAT — and nobody wants that to happen to them.

The agency people really screwed me around: I never expect things to be exactly as advertised in developing countries; but this was taking it a bit far. First, they said that there were other people also doing a 2-day trek, and that I'd be put with them — bull$#%t, I was alone in signing up for the 2-day option. And second, I paid 400B extra in order to be driven to the top of Doi Inthanon mountain — also bull$#%t, nobody else was doing this, and *Cluck* said that he never took people up the mountain. So in the end, I get a 3-day trek without a mountain ascent, for the price of a 2-day trek with a mountain ascent: not a bad deal, really. But they still f$#%ed things up badly, and I wasn't impressed with that at all.

Other than that kerfuffle, it was quite a slow and lethargic morning: we had a late brekkie (where *Cluck* treated us to some sticky rice cooked inside a bamboo stick), and we were hanging around and waiting to go for quite a while. The morning hike was harder than yesterday's walking — there was quite a lot of uphill, as the Karen village is at a high altitude — but it was still child's play, compared with the standard of trekking that I've grown accustomed to during my trip. The old Danish guy in the group (the worst of the group's many chain-smokers) turned out to be particularly unfit: he gave up about halfway through the morning walk, and jumped on a motorbike with *Cluck* to reach the lunch spot. 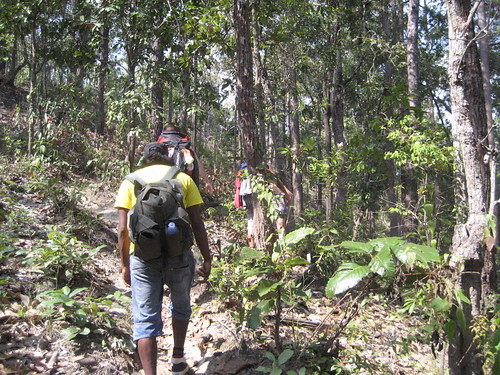 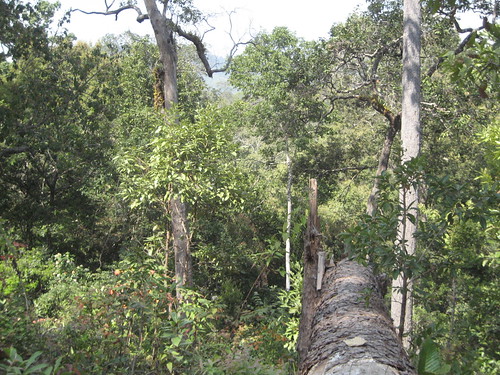 We stopped for lunch by a bubbling little stream, where we relaxed and had a nice, long siesta in some open-air huts. After that, it was just a short afternoon's walk up the hill, and through a bit more jungly path, before we reached the Karen hill-tribe village. 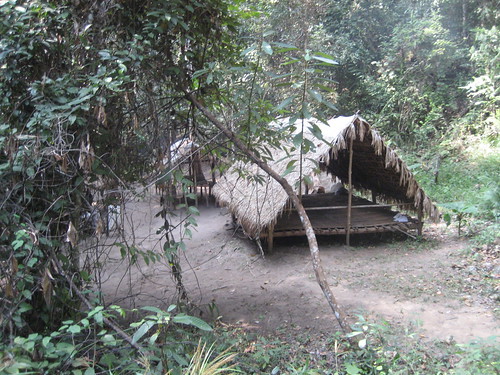 Siesta huts at the lunch stop.