Nobody ever found out his real name; but when asked, the loud and comical leader of our Doi Inthanon trek make a loud *cluck* noise with his tongue. Hence, he became known to us as *cluck*. *Cluck* is a real character. He enjoys introducing his tour groups to the wonders of bamboo bongs, of rock-sliding on waterfalls, and of fresh BBQ pig. He's a bit chubby, and he takes great pride in being able to make the rolls of fat on his chest "oscillate" in a way that most likely measures on the richter scale. Plus, he claims to own the largest house in the village where we had lunch today. None of us will be forgetting this bloke in a hurry. 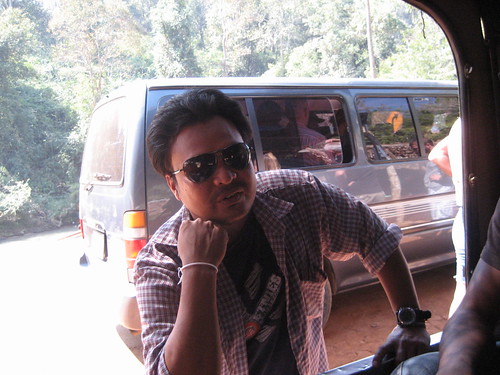 The great cluck himself.

‹ Dutch of Doi Inthanon To the camp by the falls ›
Filed in: Doi Inthanon • Tourguides • Eccentric encounters • Locals