Yesterday, I made it to the high camp on the way to Huayna Potosí. This morning, I actually went and climbed the mountain. It was very, very hard work. It damn near killed me. But, with a bit of good luck, and a lot of persistence, I made it to the top! Nothing in the world quite compares with making that last step to the top of a 6088m mountain peak, and taking in the dazzling view around you.

Our day started really early this morning, at about 1am. Apparently, it's necessary to begin the hike / climb of Huayna Potosí at this time, so that you get to the top of the mountain just after sunrise. This lets you avoid most of the searing heat of the day; it reduces the risk of getting caught in an avalanche by melting ice; and it means that you get the awesome view of the sun rising over the top of the world. Issac and Super Mario woke me and Guillaum up, and prepared a very quick "breakfast" for us.

Unfortunatly, Guillaum wasn't feeling too good — he threw up his dinner during the night — and neither Guillaum nor myself got (barely) any sleep, what with the extreme cold, the lack of air, and the tent being pitched on a pile of rocks (plus it was a small tent for the two of us). So we both had the odds against us, as we began the day of the real action.

After a quick bite to eat, and thoroughly rugging up in everything we had, we went out onto the start of the ice, to begin the trek. We put the crampons on the bottom of our boots — giving us spiky soles to walk on the icy ground with — and held our ice axes at the ready. We also wore harnesses, and attached ourselves to each of our guides by means of a safety rope. At about 2am (a bit of a late start, apparently), we were ready to go.

We hiked through the mountains for about 2 hours, walking along the ice-covered but relatively shallow uphill ascent, in the dark of night, with head torches to help us light the way. We were lucky with the weather: there was a storm brewing to the north; but where we were, it was clear as could be, and we had a beautiful view of the stars overhead. It took a little while to get used to walking with the crampons, as I've never used them before; but after about ½ an hour, I barely noticed them.

Just before we reached the first cliff-wall, Guillaum decided that he'd had enough, and he decided to head back to the high camp with Super Mario. Fair enough: the poor guy had vomited during the night, and he was feeling very weak. That left Issac and myself to go on. The first cliff-wall was my first time using the ice-axe, and it was the first proper mountain-climbing that I did on this trip, and in my whole life. It was only a short wall — maybe about 10m high — and it was pretty damn fun climbing up it; but even 10m was hard work, and it made my hands and feet quite cold indeed.

We kept hiking along the icy ground (after the first wall); and it wasn't long before the sky started getting lighter, and the first glimpse of daylight appeared on the horizon. Soon enough, we saw the sun rise above the clouds, and I was able to take in the beautiful, snow-covered, cloud-defying landscape around me. Quite a sight to behold. 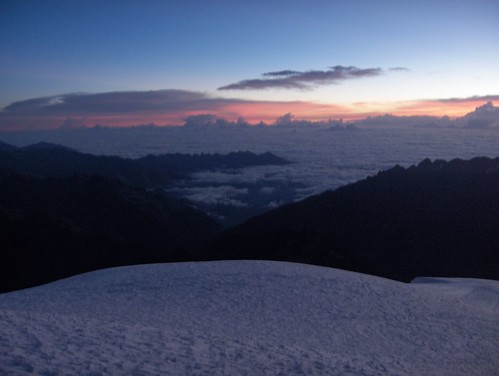 Sunrise over the clouds and ice.

The final, near-impossible challenge of the mountain was the final ascent: the second and last cliff-wall, that needed to be tackled in order to reach the topmost peak of Huayna Potosí. It was harder than anything I ever imagined it being: a sheer wall of about 200m, near-vertial in slope, that you had to basically climb all in one go, since there was no place to rest along the way. Ice-axe swinging and crampon-kicking was required at every step. Issac was above me the whole time, acting as a human safety net in case I fell (but there was nobody above him, if he fell), which thank G-d I didn't do. I got through this wall; but I swear, it was the hardest, the most draining, and the most freezing thing I've ever done in my life. 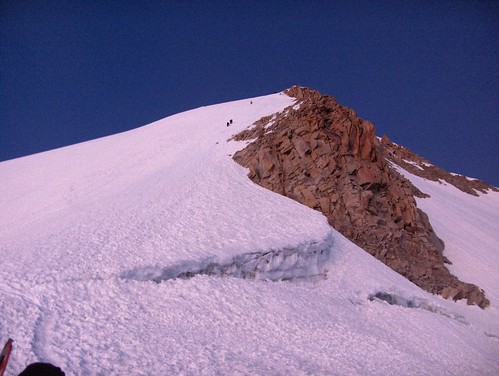 View of the final ascent from the bottom.

And then, finally, I was at the top! So much effort, so much persistence; and it was all worth it in the end, because despite being so tired I could barely think, I was still able to appreciate what an awesome thing I'd just done, and to take in the breathtaking beauty around me. 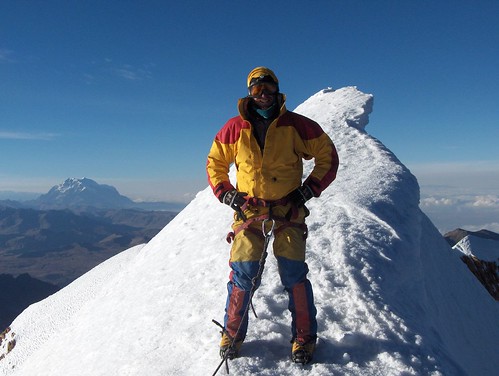 That’s me at the top.

The view from the top of Huayna Potosí is something else. To the north, you can see the mountains of the Cordillera Real continuing into the distance. To the east, the city of El Alto (the twin city of La Paz — basically the part of La Paz that spilled out of the valley, and onto the altiplano) is sprawled out for miles; to the south, the Yungas mountains (the mountains of the death road) go down to Coroico; and to the west, you can see a fair bit of Lake Titicaca, sparkling in the morning sun. And of course, there are also ice-covered peaks and beds of clouds resting all around you.

When we reached the top, we had about ½ an hour to rest, to take in the view, to grab some snaps, and to have a bite to eat and drink. Then, the part that I really didn't enjoy had to be completed: hiking all the way back.