When you backpack around the world for a year, you become introduced to quite a few card games. Also to quite a few drinking games. Sometimes — as in the case of Circle of Death, which I learned this evening — you get introduced to both at once. Circle of Death is a simple enough game: a deck of cards is fanned out in a circle on the surface of a table; and each player in turn pulls a card out of the circle. Each number (or royal) in the deck has a certain action — failure to achieve the requirements of the various actions results in the loser(s) drinking. Very fun game, and a great way to turn a group of sensible, amiable friends into a bunch of loud-mouthed, hammered knobheads. But, hopefully, still friends. 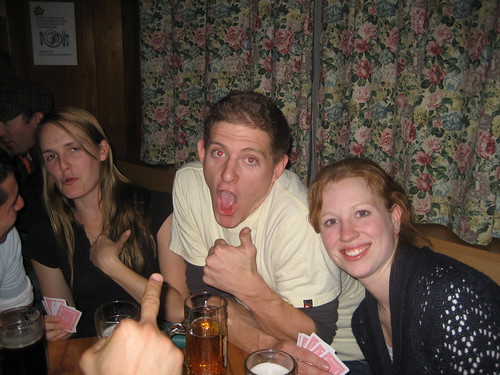 At the Circle of Death table.

Circle of Death (also known as "Kings") has many rules — with some being dubiously "official" — and after playing it this first time, I've since been exposed to yet more variations on the game. Nevertheless, this evening at the bar at Yoho, Craig and Sarah taught us their rules; and as far as I'm concerned, they'll always be the rules that I (prefer to) follow. So, these are the "Craig and Sarah" rules of Circle of Death. When you pick up one of these cards, the following actions occur (note — in this list, "a drink" refers to "one mouthful", not "one glass"): 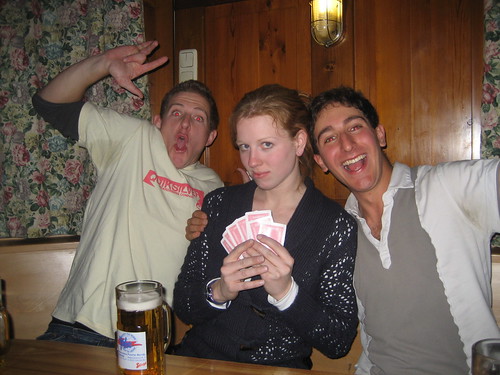 Additionally, Craig and Sarah also follow the standard rule that the first person to "break the circle" has to immediately finish their drink. The game ends when all the cards in the circle have been picked up and added to the deck. We spent quite a while (and got through quite a few drinks) playing Circle of Death this evening: and we ended up getting through quite a few bizarre made-up rules (e.g. "no pointing — everybody point with your elbows"), crazy scattergories (e.g. "dirty words in a foreign language"), and ridiculous rhymes.