Chocco is a small and impoverished town, that lies about 20 mins out of Cusco (by taxi). This afternoon, my friend Wil invited me to come with him and a group of his friends from Hampy, to go to Chocco for an informal tour of the town, of the kids there, and of the volunteer work that's being done there to help them. It ended up being a fun, social, and intriguing afternoon. It also resulted in me (most likely) becoming a part of the volunteer effort that is Hampy, for at least some of the time that I have left here in Cusco.

Hampy is a volunteer organisation that recruits people who are travelling to Cusco, and who are interested in volunteer work; and that puts those people to work in Chocco, to help out the locals there in various ways. Some of the volunteers are teaching English to the kids there. Others are helping with construction of infrastructure, such as drainage systems, sanitary systems, and housing. Still more are helping to guide the youth towards potential positive career paths, and away from crime and unemployment. The focus is on helping the kids; and from what I saw, they're doing a great job of accomplishing just that.

On the (very informal semi-) tour this afternoon, I met a number of the Hampy volunteers. There was Ashleigh, a marketing student from Canada. There was Sarah, an English nurse who's been living and working in Sydney (in Manly) for the past several years. There was Terese and Melina, the crazy Irish and Dutch (respectively) girls, that I met at Loki during my first week in Cusco (and yes, they're both still there, and still partying every night). And there was Wil, the New Yorker from Amigos. 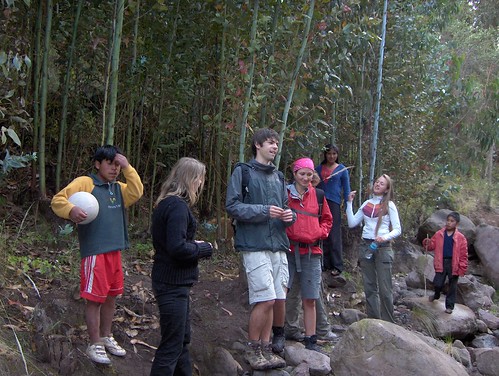 When we got to Chocco (in a convoy of 2 full taxis), we started by being introduced to a bunch of the local kids, who were very happy to see us, and very eager to show off their rudimentary English to us. Terese is their English teacher, and she was coaxing them all to tell us their names, ask how we were, ask about our ages, etc, all in English. It was very cute, and their knowledge and their enthusiasm was impressive and heart-warming. 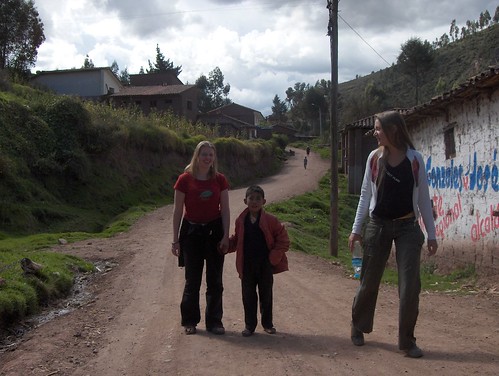 Terese and Melina encouraging one of the kids to show off his English.

After a bit of mingling, we strolled down to the local fútbol field, for a game with the kids. As with last week's experience of playing fútbol with local kids, the gringos got positively ass-kicked once again. However, thankfully I wasn't hung over for the game — like I was last week — so I didn't nearly hospitalise myself on the field this week. 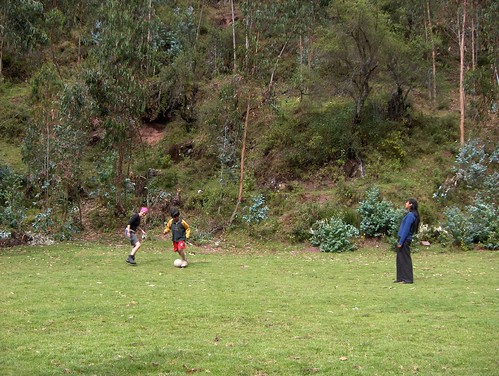 A gringo tries to oust an artful dodger on the field.

The fútbol was great fun, but after a little while it started raining, and so we kicked our final goals, and then took refuge inside a tiny little shelter on the side of the field, made from branches and leaves. There were about 15 of us huddled inside this little affair, which looked like (and, AFAICT, halachically conformed with) a sukkah, and which afforded us reasonable protection from la lluvia (lit: "the rain"). 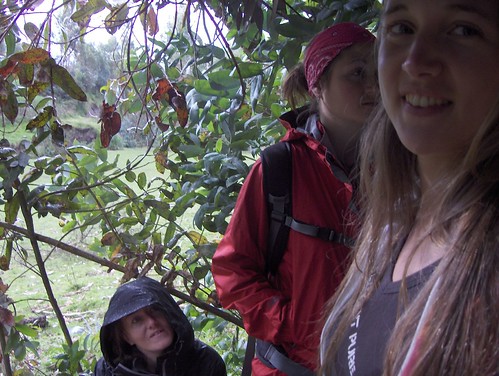 Huddled inside the Peruvian sukkah.

The rain was heavy while it lasted, but thankfully, it only lasted about 15 minutes. Once the sunshine returned, we emptied out of the shelter, and commenced a small hike through the mountainous countryside around Chocco. We basically followed a little stream uphill, crossing over it now and then, and trekking up the surrounding hills from time to time as well.

When we went up the hillside, we walked past a dazzling array of different wild flowers and herbs, and the kids started telling us the names of these plants, and explaining their various properties and uses (in Spanish — their English ain't that good!). They have a lot of beautiful wild flowers around Cusco, and all of them have a story and a cultural link to the peoples' Quechuan heritage. 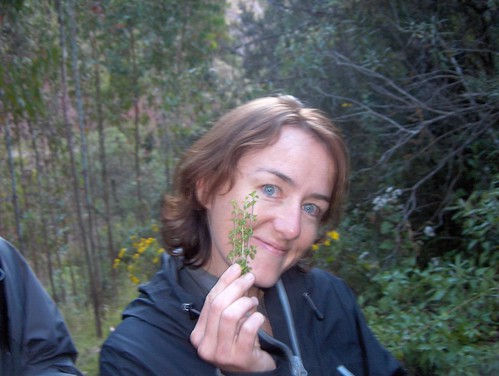 Sarah with a herb. Flowers in abundance behind her.

Soon enough, the day was waning, and so we had to make our way back to Chocco, which we did via a dirt road, up on the ridges of the hills. By the time we got back, it was almost dark. Along the way, the kids picked up a stash of stalks, of a plant that I think is a type of sugarcane. They shared the stalks with all of us, and demonstrated how to peel off the leaves and the hard outer layers, and to eat the inside. It wasn't as sweet as sugar, but it was quite tasty nonetheless.

The final activity in Chocco was participating in the evening's English class, which was led by Terese. She's a great teacher, and the kids are great learners, although they're also a bit rowdy and inattentive at times. Terese handles the kids by making everything a game. For example, we started by playing a game where the numbers 1-20 were written on a sheet of butcher's paper on the wall, and where two people (in each round — one from each of two teams) stood up, and had to race each other to the number that got called out in English. 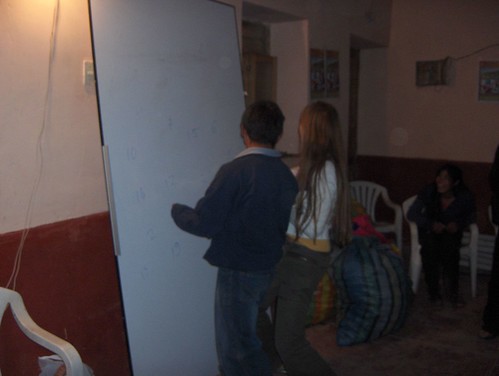 Racing to the numbers.

We played another fun game (yes, we — us gringos played as well), where each person received a card with an English word on it. Terese then put on the famous Beatles song "Hello, Goodbye"; and each person had to jump up and shout their word, when they heard it in the song. Very chaotic, but very entertaining to watch and to be a part of. And copious amounts of sweets and junk food were given out and consumed at the end. 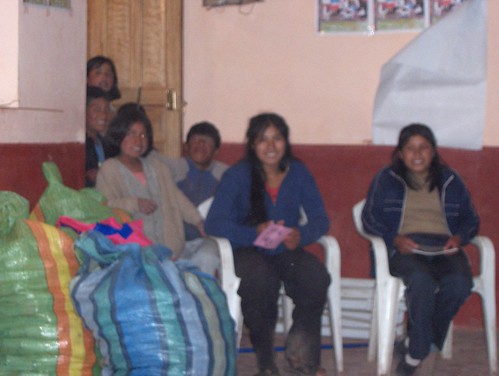 Kids listening to the song, and waiting to jump up.

Before we left Chocco and returned to Cusco (about 8 of us in one taxi — story of my life lately in Cusco), I met Jorge, the director of Hampy, and a guy who needs someone to help him out a bit with the organisation's website. So guess who got sucked into agreeing to volunteer for this? Yeah, that's right: the guy who promised himself that he'd avoid any and all offers of work, for the duration of his trip. But hey, it's not a big job (*cough* *cough* — yeah right, I've heard that one before), and it's strictly for while I'm still in Cusco (2 more weeks, 3 max), and for when I have spare time.

And I gotta admit, I'm starting to suffer withdrawal symptoms, from prolonged lack of programming; and I need a fix before I continue my travels. Aaand... Jorge has an office, which means I'll get some free PC and Internet access! (*cough* *cough* ulterior motive).

So all up, it was a really great experience, coming out and seeing how the volunteers are helping the less advantaged local kids here. And I'm feeling very positive and excited about being able to volunteer my own skills to Hampy, for whatever short time I can.

I am very proud of you. It's a wonderful thing to be a volunteer and give back to these people. You have amazing skills that would otherwise cost them money they don't have.