This morning, we finished our tour of the Salar de Uyuni and of south-west Bolivia. We stepped out of our dusty Land Cruiser 4WD, we transferred into a minibus, and we made our way to the Chilean frontier (having already technically left Bolivia two days ago). Our first of many introductions to the differences between these two countries, upon crossing the border: the first sealed, properly signposted road that we'd seen in a month! Chile really is a very, very different place to Bolivia. It's like stepping into another dimension. 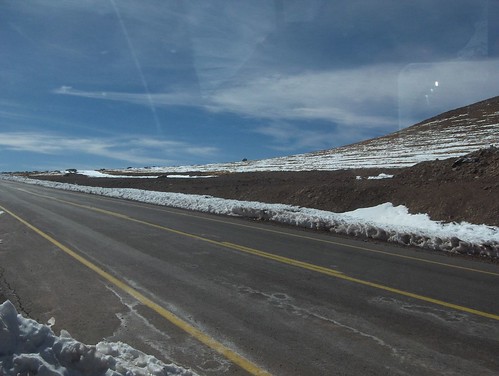 Woahhh… a real road… I almost forgot what they look like.

After about 20 minutes of travelling literally across country in the minibus, along a path of dirt that barely passed as a road, we suddenly hit this amazing tarmac route. It was, as the driver explained, not a Bolivian road ("ahhh... finally, it all makes sense!" :P); it was the highway between San Pedro de Atacama (in Chile), and Salta (in Argentina). There isn't a "road", as such, between San Pedro and Bolivia; not by "non-Bolivian road" standards, anyway. Well, after that, it was smooth sailing along the road, all the rest of the way to San Pedro in Chile.

Even after just one day here in Chile — and only in the north of Chile, mind you, where things are apparently "fairly primitive" compared to the south — I've noticed some huge differences between the two countries that I've been in today. Here are just some of them:

I'm sure I'll discover more, similar, differences between these two countries, as I continue in my travels. Like I said, it's like stepping into another dimension.