After a short gelato break, this afternoon I continued cycling up past the port town of Milazzo, to the Capo di Milazzo itself. Capo di Milazzo is a long, thin, steeply-rising cape, that sticks out into the sea from the north coast of Sicily. Getting to the tip of the cape proved harder than expected — I didn't realise how high-up the cliffs at the tip are, so it was uphill all the way — but once I made it, I was well-rewarded for my efforts. The views from the tip are stunning: as well as the gorgeous cape itself, you can also see the resort coast curving back into Sicily behind you, and the sea and the Isole Eolie in front of you. Lovely spot, especially with the sun waning at the end of the day. 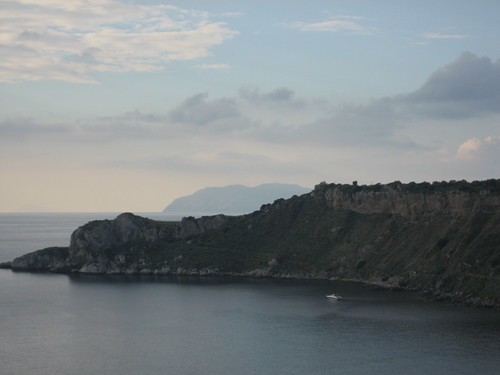 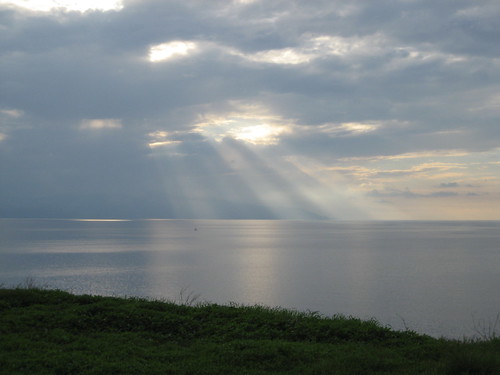 Sun going down over the cape. 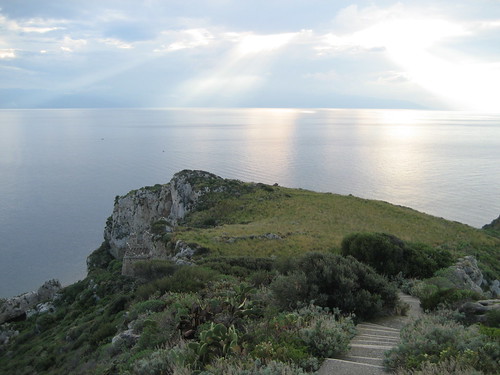 Park and walking trail, on the tip of the cape. 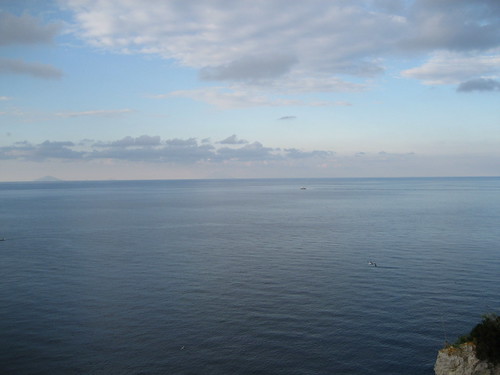 Isole Eolie in the distance.

I rode up to the tip of the cape, by way of the road that hugs its eastern edge. This was a difficult road: but I doubt that it would have made much difference which road I took, as it's steep getting to the end, and there's no way around that. When I was almost at the end, I stumbled across a campsite — however, I didn't enquire about spending the night there, as I planned to get beyond the cape today — I just asked them how to continue to the tip. This turned out to be (arguably) a mistake: but hey, I had yet to learn just how lucky it is to find an open campsite in Sicily in November :P.

Once you get past the big houses and the resorts, the tip of the cape is all protected parkland, with a lovely boulevard running down its spine, and with some sort of lighthouse at the end. You can't go to the lighthouse — but there's a park and a walking trail just past it, and that's open to the public. I decided to risk leaving my bike at the start of this trail for 10 minutes, and to walk down it for a bit: the views on the trail were stunning; and luckily, nothing happened to the bike. But I was a bit worried about doing this.

Thankfully, the hard work of reaching the cape was repaid at the end of the day: getting back off it was downhill all the way! So it was a quick, easy ride back to Milazzo, and virtually flat riding for the rest of the day, around the coast that continues west of the cape, and over towards Tindari.