It was already getting dark by the time I was done with Capo di Milazzo this afternoon — so I knew I didn't have much time — but my map had a campsite marked along the coast towards Tindari, and I was determined to reach it for the night. As it turned out, I really didn't have enough time: it was quite thoroughly dark by about 5:15pm; and I was still on the highway (with nothing but my little headlamp to light up myself and the road ahead) at 6pm! Riding in the dark was no fun at all: but as I saw it, I really had no choice. Anyway, I finally saw a turnoff with some "camping" signs marked on it (thank G-d the "tent" symbol is universal); and at around 6:15pm, I reached "Camping Bazia". Only to find that the site was shut — only open in peak season, it seems.

The place was locked up. Completely barren. No way of getting in, either. Great introduction, for my first night on the road in Sicily, eh? Anyway, the campsite did have one saving grace: there was plenty of flat, grassy-ish space out the front, free for anyone to squat on; and so with little other options (I couldn't go any further — already way too dark for that), I set up camp right then and there. It turned out to be a fairly OK spot to camp: the ground was too hard to stick pegs into, and the bathrooms were inaccessible (as they were inside the locked site); but there was ample space, and it was a quiet street off the highway as well.

All up, my first night of camping went pretty well. I managed to set up my brand-new tent for the first time, and I did it in the dark and without being able to use pegs. The single, three-spoked pole on the tent is very cool: it just kinda springs itself together when you pull it out; and it's quick and easy to put through the canvas. I also inaugurally used my gas cooker and camping saucepan, and cooked up some tasty tomato pasta (the first of many) for dinner. I got a good night's sleep — despite it raining for half the night (didn't get wet at all) — my Kathmandu birthday sleeping bag is keeping me snug as a bug in a rug, and my new air mattress is nice 'n' comfy too. 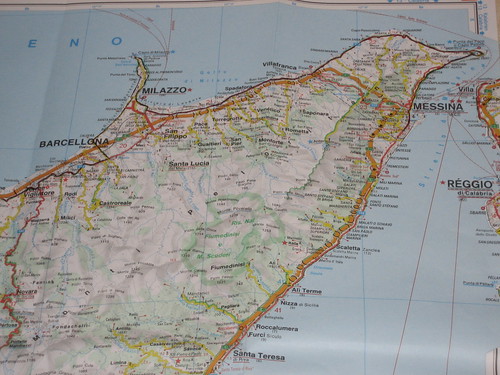 "Camping Bazia" was quiet all night; however, there were some suspicious goings-on when I woke up the next morning. While I was having breakfast and packing away, I noticed quite a few tough-looking guys in dark cars, passing in and out of the locked-up site all morning (apparently, they had the keys to the entrance gate). Anyway, they didn't bother me, and I didn't bother them — we said "good morning" to each other, and that was about it. But I wonder what they could be doing, going to a closed campsite at this time of year? Perhaps when the site is closed to tourists, it's open for secret Mafia gatherings. Who knows — I didn't dare enquire further :P.