Ask any German, and he/she will tell you that food doesn't get more Deutsch than Bratwurst. But ask my uncle Mark, and he'll tell you that the Swiss variety of the famous European sausage is even bigger and even better. I can't yet compare; but so far, the Swiss one has been pretty good. At the famous Berghaus-Keller restaurant in central Zürich, they cook up a mean veal bratwurst, served hot and fresh with a delicious helping of kartoffel-rösti on the side (baked mash potato). Also goes well with a nice big Swiss beer (my first ever). 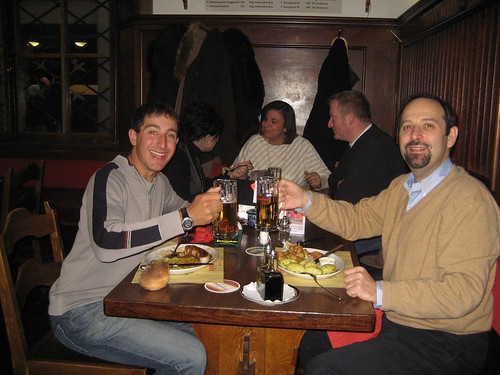 Uncle Mark treats me to a veal bratwurst at the Berghaus-Keller.

As well as the bratwurst, the rösti and the beer, today's visit to the Keller was also a first for trying one of Switzerland's finest hallmark salads. I forget what it's called, but (among other ingredients) it consists of egg, tomato, onion, and a beautiful chewy lettuce leaf that I've never tasted before.

The Berghaus-Keller restaurant building is also a very cool place. The building itself is over 500 years old, and had great significance at various points in Zürich's history, being used occasionally as a community meeting-point, as a storage facility, and even as a fort of defence and a refuge for the entire towns' citizens. This medieval (and more modern) heritage is fabulously well-preserved: the building retains its original architectural style, and much of its original interior; and the walls and corners are decorated with Swiss Army relics such as swords, lances, suits of armour and cannons. Plus, they give you a sheet (in English or German) explaining the significance of the building and of everything inside it.