For my first day here in Berlin, my mate John and I embarked upon an epic exploratory tour of the city. We began in the city's east, and gradually worked our way west, towards the old wall. Berlin is a fascinating city to walk around in — especially if you're aware of the troubled history behind its sparkling new façades.

We began by wandering around the Mitte district — the area where our hostel is — and then by continuing east along random thoroughfares. East Berlin took me completely by surprise: I've read and heard many things about it, and I found none of them present in the place today. For over 40 years, East Berlin was cut off from the rest of the city (for much of that time, cut off quite literally by the infamous Berlin Wall), due to it falling under the curse of Soviet rule. It suffered from poverty, a "Big Brother"-like secret police presence, and nauseating Soviet architecture. Today, the East is being rapidly rebuilt: most of the structures in sight are modern and attractive; and the few ugly Soviet legacies remaining are in the process of demolition. It's really quite incredible, the extent to which they've managed to transform the place and to integrate it with the Western half of the city, in a mere 17 years. 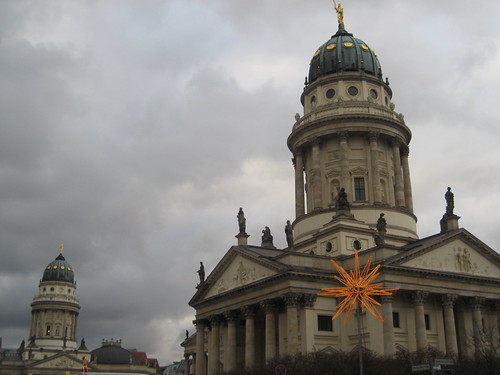 In the afternoon, we made our way over to the Brandenburg Gate, the famous symbol that — alone amidst the rubble — has withstood all the trials and tribulations of modern Germany. The gate was behind the Berlin Wall while the wall stood, and thus was closed for the better half of the latter 20th century. It's recently undergone an expensive refurbishment and restoration project, which actually was only just completed last year. It's a very impressive sight: especially since it's so historic (built in 1791), and since so much of Berlin today is über-modern and lacking in symbolism. 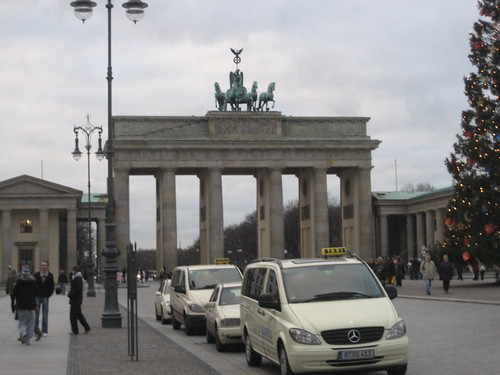 Brandenburg Gate, from the Under Den Linden approach. 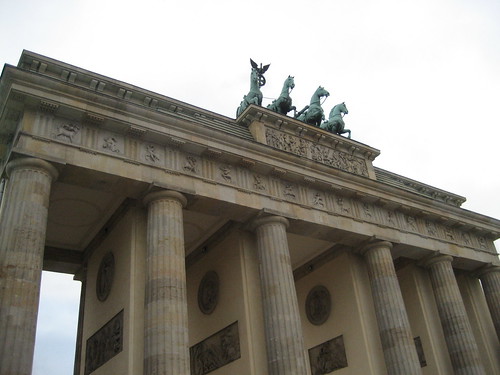 Chariot statue atop the gate.

There's a strange but kinda cool little place, just next to the Gate, called the "Room of Silence". John and I went inside to see what all the fuss was about: as its name suggests, it really is simply an empty room with chairs, where you can sit down and enjoy a bit of quiet time (and warm time! :P). According to the blurb that they give you at the door, it's a "non-denominational space where anyone can escape from the noise outside, and relax and meditate for as long as they desire" (or something like that). Not sure exactly who it's sponsored by: although I believe the Baha'i community supports it the most.

The remainder of the afternoon was taken up by our visit to the Bundestag (German Parliament) building. This is a super-modern edifice, with a stylish design that includes a dome-shaped glass roof. It's free to go inside and to walk to the top of the roof's conical interior (an elevator takes you up to the base of the cone): and as such, the building is extremely popular with tourists. John and I joined the long queue at the entrance — and while waiting in line, we met and started talking to another American backpacker dude, who's staying at a hostel nearby to ours.

Once through the security checkpoint and up the elevator, we were free to stroll up the spiralling ramps inside the dome, and to enjoy the marvellous views of the city to be seen through its transparent walls. It was getting dark (and cloudy) by the time we made it up — so photo opportunities weren't optimal — but we still had good enough conditions to capture the essence of the panorama. It's also very cool how you can see the inside of the main Reichstag parliament floor, through the circular plate of glass that separates the parliament from the dome-shaped roof. I would have thought that this would be something of a security risk: but I guess that the glass is sufficiently thick as to be relatively impervious to gunshots. 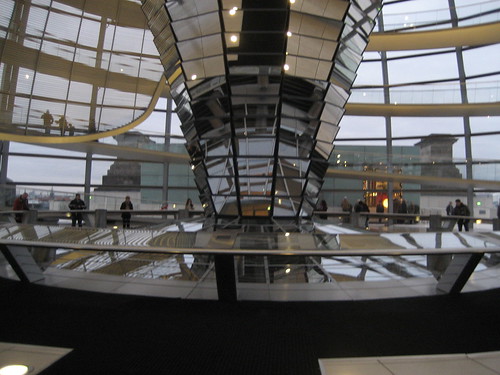 Glass dome roof of the Bundestag, with conical set of mirrors forming its central pillar. 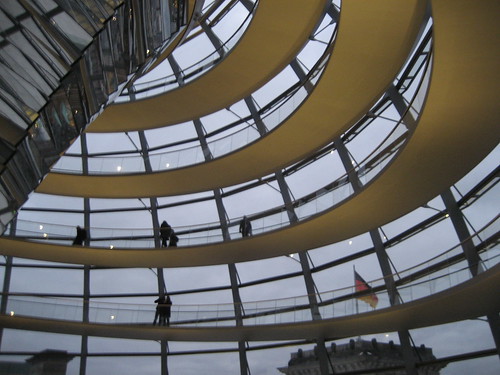 Spiral ramps leading up inside the dome. 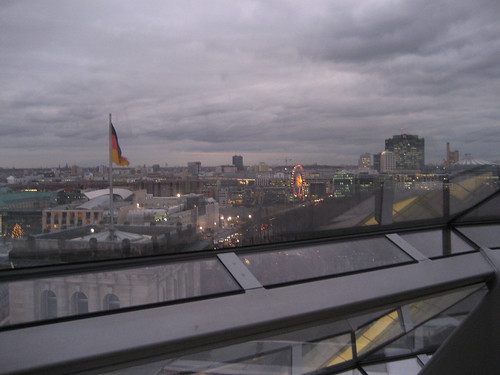 View of Berlin from the top of the Bundestag. 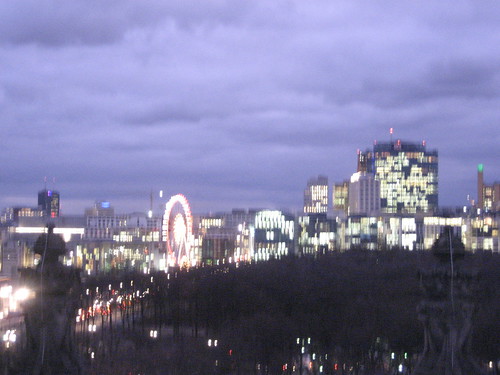 Berlin at night: view from the top.

That was about it for our tour of Berlin. It was a refreshing (but also rather startling) change to see such a new and modern city, here in the heart of Europe. Every other city I've visited so far on this continent has been centuries-old, and has taken great pains to preserve its medieval (or older) architecture in every nook and cranny. Berlin has none of that. On the one hand, it's very sad to reflect upon how much was lost, when the city was (virtually) razed to the ground during the Nazi defeat of 1945. Germany paid for its sins during the Third Reich era, and it paid for them not just in blood, but also in the stone of the nation's heart: its glorious capital, once-historic Imperial Berlin. But on the other hand, it's also uplifting to observe just how successfully the people of Berlin have managed to rebuild their city; and how Berlin's scars from the worst tragedy in world history have been all but wiped away, making it a proud and beautiful cornerstone of 21st-century civilisation.