One of the things I've been looking forward to doing, here in England, is the famous Bath-to-Bristol bike ride. Well... maybe it's not that famous — several of my English mates from South America, including Oly (who lived and studied in Bristol for several years), recommended it to me (so that makes it famous enough for me). Anyway, today I gave the ride a try, and I'd be lying if I didn't say it was a blast. Lovely route, following an abandoned railway track and a peaceful countryside valley; well-done track, wide and sealed almost the whole way; and reasonable weather for it as well. I don't think too many tourists are aware of the ride, but whoever stops by here and doesn't do it is missing out.

The ride was great fun, but this morning's efforts to find a bike were not so fun. Since the track to Bristol is so well-done and so popular, I assumed that hiring a bike in Bath for the day would be no problem. Wrong! There are about 5 different bike shops in Bath: but not one of them has bikes for hire. One shop — the one just behind the train station — used to rent bikes, but they stopped doing this about 5 years ago, claiming that "it wasn't proving to be profitable". Anyway, this place was able to recommend another store — in Limpley Stoke, a tiny place about 5 miles out of Bath (in the opposite direction from Bristol) — that does rent bikes.

I managed to get a bus to Limpley Stoke (the X4 or X5 from the Bath terminal); and once there, hiring a bike for the rest of the day was no problem. The place in Limpley Stoke is right next to a canal, and they rent out canoes and boats, as well as bikes. It's all very quiet here in autumn, but it seems like it would be a busy place in the summertime. So once I had my hired bike from this place, I was able to finally start the ride, and to go and see Bristol for the first time. 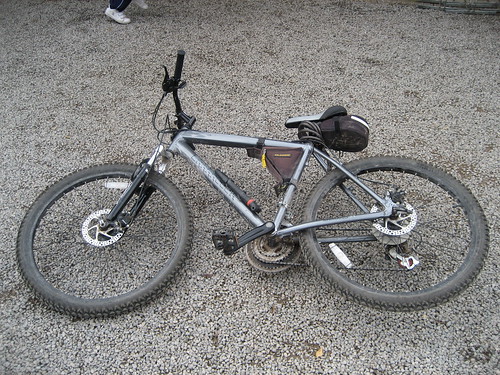 The ride from Bath to Bristol is about 15 miles; but Limpley Stoke to Bath is an extra 5 miles. All up, that's 20 miles each way — which is roughly 35km's each way. 70km's all up: and less than 6 hours in which to do it. But I managed it alright in the end. 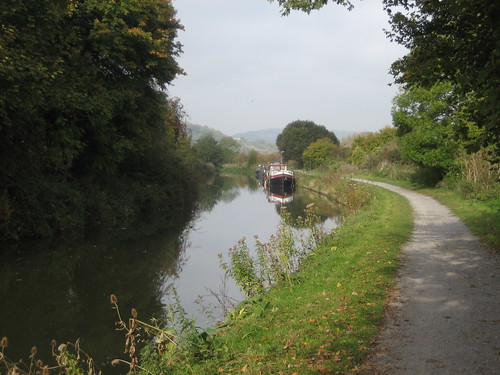 Riding out of Limpley Stoke. 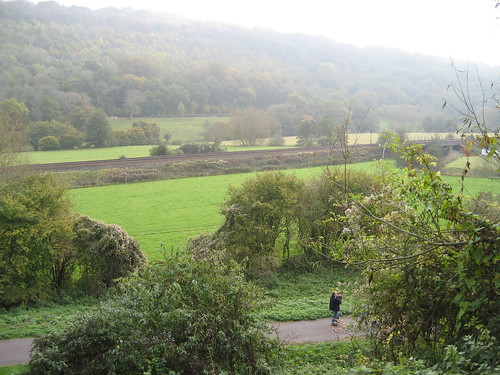 Countryside valley and the train track near the canal.

Fortunately, the Bath-to-Bristol track actually continues on from Bath to Limpley Stoke (and beyond), so I was able to take a single route right from the start. For the first 5 miles, most of the way the track goes alongside an artificial canal. The canal was constructed back in the 1800s, as a means of transporting wood and coal into Bath by ship. However, by the early 1900s, it was no longer being used for this purpose; and from the 70s onward, it started to be used for recreational purposes. Today, the canal is chockers full of quirky little longboats, many of which people appear to live on, and others that seem to be deserted except in the summer. There's also a lovely countryside valley that goes alongside the canal, and an old train track that meanders its way through the farms. 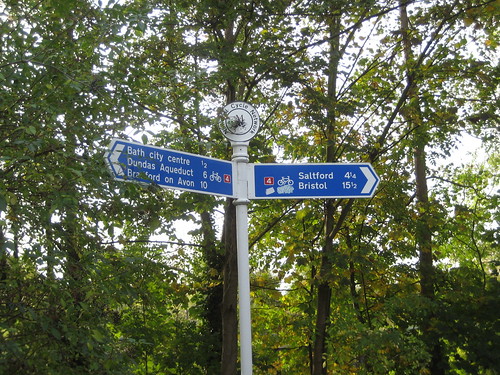 On the Bath-to-Bristol track proper. 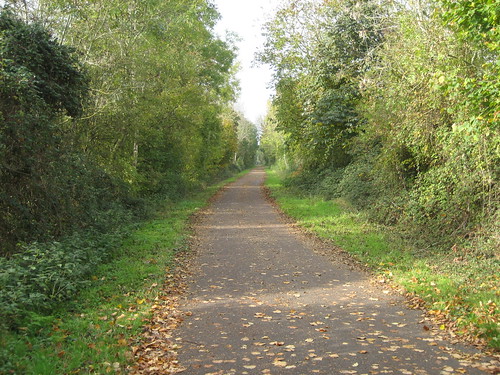 Track through the woody countryside. 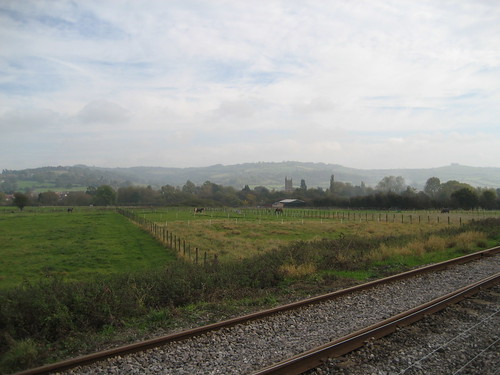 The 15 miles between Bath and Bristol — i.e. the ride proper — were a pleasure. The route is well-sealed, virtually dead flat, and very scenic for most of the way. It starts out by following the river that goes through Bath; then it gets into the countryside, and it follows the old railway line for quite a distance. Finally, it gets into the outer suburbs of Bristol, which take a fair bit of time to get through (as Bristol's a biggish place). The route is also very popular: there were a tonne of other people riding on it; most of them looked like locals, and a lot were families with kids (I guess the commuter cyclists can be seen more in the mornings and the evenings).

I made it to Bristol by 2pm, which gave me about ½ an hour for lunch. I can't say I was that impressed with Bristol: maybe the bike track just popped me out into a bad part of town; but what I saw there was not pretty. Lots of poor, migrant workers; lots of run-down buildings and council houses; and lots of kids roaming the streets. Seems like a pretty dodgy place to me. I grabbed a chicken meal, at a halal fast-food joint on the main street, and tied up the bike behind a church (just to be safe).

Not much to say about the ride back: except that it was pretty similar to the ride there, only I was in more of a hurry. I wasn't exactly short of time — I'd made it to Bristol in 2½ hours, and I had roughly 2½ hours to get back — but then again, if I'd dawdled I would have been late getting back. I took it pretty solid, with barely a stop, and I was back in Limpley Stoke by 5pm. A very scenic and refreshing day, but also quite a tiring one.