Cusco is a great place to learn Spanish, and it has about 20 schools for the aspiring student to choose from. Today was my first day of classes at the Amigos Spanish school, where I'll be having classes from 8am-12pm, Monday to Friday, for the next four weeks. After today's lessons, I'm really looking forward to the rest. 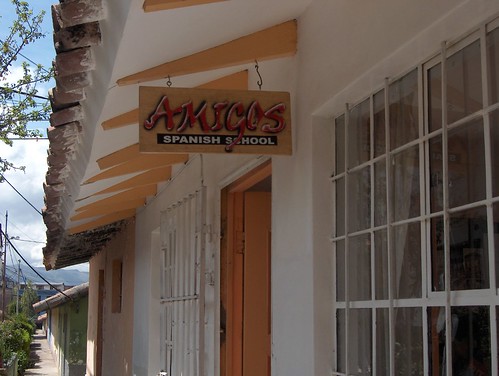 This week, I'm in a class of three, with two older American women. Chrystal is in her 50s, is travelling alone for a bit on her work vacation (she's a nurse), and is from a small town in Oregon. Ann is in her 60s, is travelling with one of her daughters (Amy, who's also studying here, in a different class), and is from San José, California (just near Sunnyvale, where the OSCMS Summit 2007 was!). Chrystal and Ann are both roughly on my level, in terms of Spanish skill, although they haven't had that much practice.

We have two teachers, who take us for 2 hours each. Ursula has us from 8am-10am, and Merly has us from 10am-12pm. Quick break in between. Tea and lollies provided, on the house.

It's a bit early to say for sure, but it seems that I made a good choice in enrolling here. Great people. Great environment. And great teaching.