For today's main activity, my friends Stef and Annick took myself (and little Karlijn) on a drive out of their home town of Turnhout, and over to the big city of Antwerp. Antwerp is only 50km's away from Turnhout, so it was a quick drive of less than an hour to get there. Antwerp is the heart of Flemish Belgium, and I soaked in as much of it as I could, as Stef dragged me around in the dreary December weather to see the sights and sounds. Annick and Karlijn, however, had better things to do than get soaking wet while wandering the streets: they stayed warm and dry in Antwerp's central mall, where they embarked on that greatest of all female pastimes: window shopping.

When we drove into Antwerp and reached the historic centre, I learned my first lesson about the city: it hasn't got much parking. Most of the public parking in the centre is on the edge of the river, where they've paved several large flat areas with cobblestones. We ended up cruising through these carparks for over ½ an hour, searching for a spot; by the time we found one, we'd spent almost as much time in the carpark, as we did driving on the highway! Anyway, once we were parked and unloaded, we found ourselves conveniently across the road from the edge of the old town. 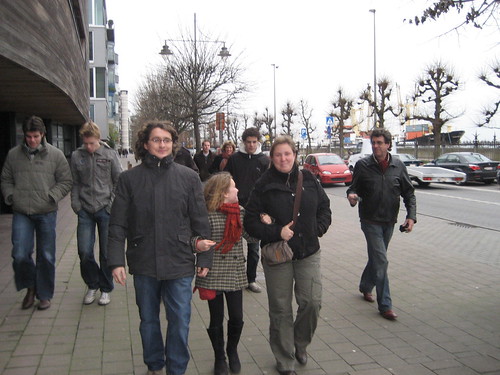 Stef, Karlijn and Annick (left to right) walking in Antwerp.

The old town of Antwerp dates back at least to medieval times, and it's gorgeously well-preserved. As well as being architecturally colourful, the place was also buzzing with life this afternoon: despite the weather being downright miserable, locals and tourists alike were nonetheless thronging the streets, keen to join in on the Christmas spirit; and to shop and eat and be merry. And on a Saturday in December, all three of the above are perfectly possible in Antwerp. For shopping, the city's many upmarket clothing stores are all open (and their "on sale" signs are nowhere to be seen), as are most of the famous diamond shops. For eating, there's everything Belgian — from waffles to chocolates, and from fries to crépes — as well as (seriously) everything from everywhere. And as for being merry: well, here in Belgium, that involves lots of warmth and even more beer; and Antwerp's tanker-load of pubs should keep even the Irish among us satisfied. 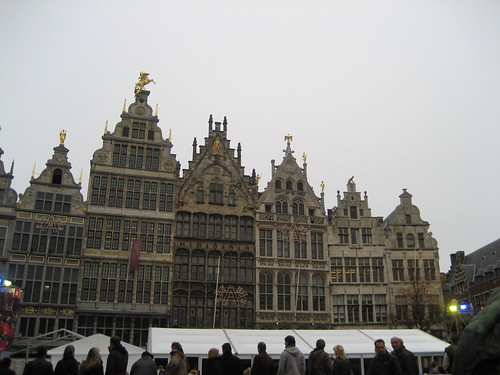 When we reached the central square of Antwerp, I was rewarded with a very special sight indeed. More special than yet another Christmas market. It was the first time ever, in my whole life, that I've seen an outdoor ice rink! Of course, all the Belgians thought nothing of it — here in Europe, outdoor ice skating is simply What You Do™ in winter — but for an Aussie such as meself, it was instead Really Frikking Cool™. I would have whacked some skates on and had a go (I've skated since I were a wee lad, albeit only indoors), if not for the fact that I just couldn't stop staring and gaping in awe on the sidelines. 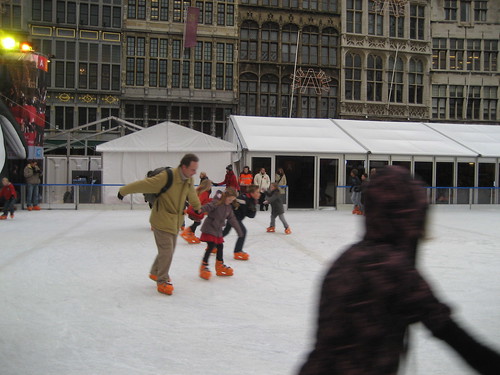 The four of us wandered around the central square for a little while, being spectators by the ice rink, and perusing the offerings of the Christmas market. There may also have been a dash of Glühwein drinking, in amongst it all :P. From the square, Annick and Karlijn split off from us to embark on their lengthy window-shopping spree; and Stef led me off to see a somewhat different side of the town. Different, yet very famous. The red light district.

I wasn't expecting to see a "full-on" red light district here in Europe, until I reached Amsterdam (which I won't be doing for another two days). I didn't realise that Antwerp has a red light district much like Amsterdam's (if smaller), and it really did take me by surprise. Although even if I'd have known about it, I believe I still would have been shocked at what I encountered. For about three whole streets, in an area a few blocks from the central square (and still inside the old town), the shops are lined with lit-up windows; and behind the windows, scantily-clad women sit and beckon to passers-by for up to 12 hours every day. I really can't say it did anything for me: most of the girls are quite average-looking (with a few being downright ugly); and I found it more depressing than erotic to see them there, bored and destitute, looking like they could hardly be more demeaned and humiliated if they wore a red price tag around their necks. Thankfully, they at least refrain from going that far.

According to Stef, most of the whores in Antwerp are immigrant women — mainly from eastern Europe — who are at the bottom of the food chain, and who are forced to earn a living in whatever desperate way they can. Anyway, it didn't turn me on; but walking along those streets certainly was an eye-opener, as well as something that everyone needs to see, just to be confronted with the in-your-face truth of it all.

The weather really was a shocker this arvo: intermittent drizzles of rain, and freezing temperatures to complement it. As such, Stef and I felt it prudent to adjourn our wanderings for a brief interval, and to take refuge in one of Antwerp's many bar/café establishments. We chose a big yet cosy place on the corner of the main square, where (for a change) we ordered hot choc instead of beer, and where we had ample opportunity to rehydrate, to recharge, and (most importantly) to warm up.

After the café break, Stef continued his little tour of Antwerp, by taking me over to the city's famous "diamond district". For centuries, Antwerp has been a key point in the international diamond trade network; and for most of that time, the majority of the city's diamond merchants have been orthodox Jews. That tradition continues today: as with "diamond row" over in New York (which is another key point in the network), the many humble shops (with their not-so-humble merchandise) are presided over by coat-wearing, big-bearded chassidim. Today being Saturday, we didn't actually see any orthodox Jews on the streets (let alone working in the shops); but we passed by a tonne of the polished windows with their glittering wares, and more than a couple of the owners' names in those windows sounded Yid to me. 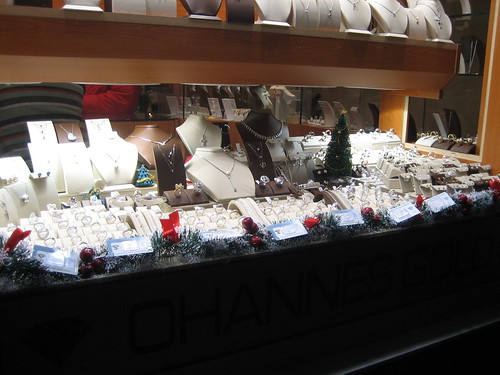 By the time we were done exploring the diamonds, it was getting dark (and the weather was only growing colder and wetter), and it was time for us to rendezvous with Annick and Karlijn. To our great shock, we returned to the main square to find them bereft of purchases: they actually had managed to only window shop, and to refrain from splurging out and buying anything. Is this possible? Anyway, after our additional bout of walking in the cold, it was time to stop and warm ourselves up again. On the way back to the car, we stopped at a funky little bar — and this time, we went straight for the beer (and it was the girls' turn to go hot choc). There was no problem bringing Karlijn inside, and sipping beer at the table with her: apparently, here in Belgium kids and beer can mix together just fine; no doubt, they would have gone ahead and served her a pint as well, had we requested it. Once done with the beverages, it was time to hop back into the warm car, and to drive back to Turnhout.