After we said hello to all the animals on the farm in Pilcopata this morning, we went on a little walk through the fields at the back of the property. In one of the (many) pineapple fields that we passed through, we were shown the "old airport". This consisted of a single abandoned, overgrown Cessna plane, which apparently hasn't moved from its resting place for about 15 years, and which is totally covered in vines and bushes. Would have been good fun landing one of those around here, once upon a time. 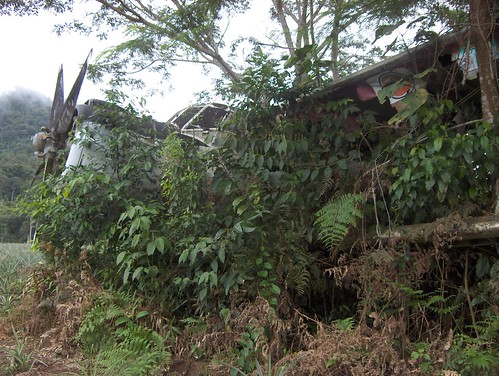 Bit of plane, lots of bush.

The plane looked very forlorn but also quite in-character, sitting there amongst the pineapples, weathering away its years in pasture. We managed to get through the scrub, and to climb into the rusty old cabin within it. Everything's falling apart and being eaten away — there's a massive termite nest in one corner, and insects are creeping around in all the dark places — but it's still reasonably intact. The cockpit's still got all its bits and pieces, such as steering yokes, seats, thrusters, and information panels. Much more fun than just looking at an old plane behind a red cordon, in an air-conditioned museum.