A field near Corleone

After meeting the locals in Prizzi, I continued my tour of Sicily's mountainous Mafia heartland this afternoon, by riding through the town of Corleone. Despite the fact that the town's name is infamously recognised worldwide — thanks to the classic Mafia book and movie, The Godfather — there really ain't much to see here. Basically, I rode through Corleone, and now I can say that I've been to Corleone; that's about all, as it's a plain and unexciting (and somewhat run-down looking, in my opinion) highland town. From Corleone, I continued cycling for as long as I could this afternoon, until the day grew dark, and I found an empty field on the side of the road in which to camp it rough for the night once again. 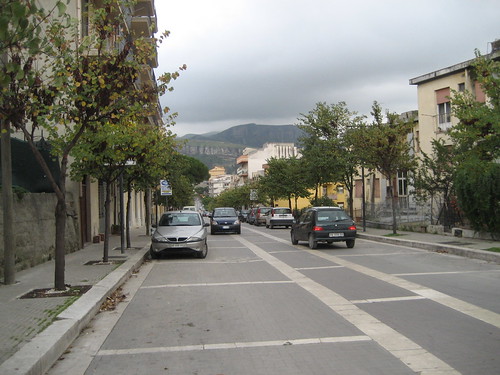 Main street of Corleone: I’ve been there, it’s no big deal, really. 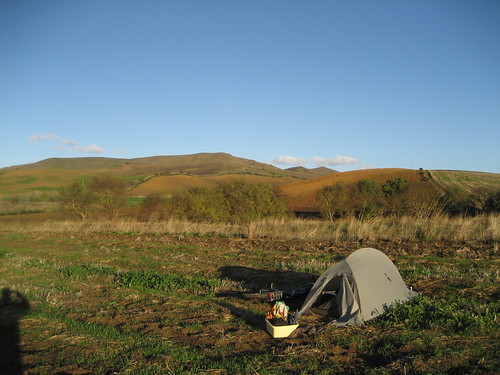 The area that I found myself in at the end of the day was reasonably rough-camping friendly: quite a few empty and accessible fields, on either side of the road; although also plenty of fenced-off fields, and fields with houses right next to them. The field that I ended up going with was the most desolate one I've camped in so far: there were no houses in the immediate vicinity; and I had a lot of flat empty space to choose from, when picking a spot on which to pitch my tent. Sadly — as with last night's field — this field was also home to quite a few leeches; however, my tent is quite secure and hole-free, so none of them made it inside.

A much bigger problem was the terrible wind, which I had no protection against whatsoever; which made it near-impossible to actually erect my tent (it was a miracle that I got it set up — and I actually needed to hold the windward side down with the full weight of my bike, or it would have been blown away); and which buffeted me remorselessly all night long (it was a noisy and fitful night, let me tell you). Anyhow, I managed to cook dinner and to keep warm, by staying holed up inside the tent; and I survived the night, and made it back to civilisation the next day. 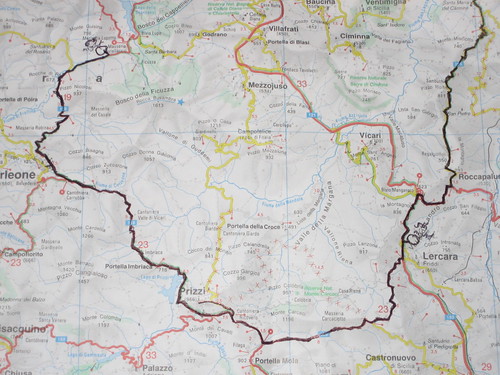 ‹ The Prizzi gang Down to Palermo ›
Filed in: Corleone • Windy • Mafia • Illegal • Fields